There are not too many industries out there that actively push for more government regulation.
Nov 4, 2009 8:20 PM By: Ian Ross 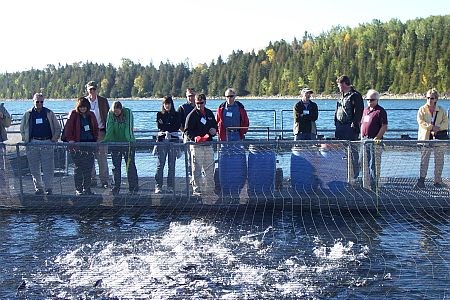 There are not too many industries out there that actively push for more government regulation.

But that's what Northern Ontario fish farmers have been asking for with the release of a new strategy that they hope will grow the province's bantam-sized aquaculture sector.

Veteran Manitoulin Island fish farmer Mike Meeker calls this fall's release of his association's, Strategy for Sustainable Aquaculture Development in Ontario, “the most important advance” the industry has made in 15 years.

The head of the Northern Ontario Aquaculture Association hopes it serves as a blueprint to stimulate investment, attract fresh blood, promote greater public acceptance of fish farming, and improve a sometimes rocky relationship with government by creating the regulatory framework they've always wanted.

Despite being around for more than two decades, Ontario aquaculture is still relatively small with 4,500 tonnes annually produced of mostly rainbow trout, compared to the huge salmon farms in British Columbia.

In its strategy, the Manitoulin Island-based association said although there is potential for more freshwater aquaculture, the provincial industry has been stagnant for more than a decade.

Meeker said many operators are getting older, with the average age of over 60 and with such a big public demand for locally grown food, “we should be growing this industry and we're not.”

He said “it's a recipe for disaster” since Ontario fish farmers can't produce enough trout to land contracts with big suppliers and grocery store chains. Yet Ontario imports millions of pounds of rainbow trout from Chile, Argentina, Peru and Norway.

“It's totally ridiculous,” said Meeker. “We can be growing it and we can do it in a very environmentally responsible and sustainability way. This is what we've been saying for 10 years.”

The association represents eight cage aquaculture operations in Georgian Bay and the North Channel of Lake Huron, along with fish processors, and dozens of land-based producers in southern Ontario who supply trout fingerlings.

Meeker said this isn't a case of the industry drawing up rules for government to follow, but it was a collaborative effort of agreed-upon standards on things like site selection and certification with Ontario's Ministry of Natural Resources and every regulatory group linked to aquaculture.

“We have to give them a document to use as a tool to move ahead.”

Their plan also calls for establishment of a demonstration farm to serve an R&D and educational interpretative site.

Over the years, Meeker said being an environmentally-responsible and transparent operator with an open door for public tours and to participating in government and academic research projects has helped convert some many skeptics into allies.

Aquaculture's image has taken a beating over the years by conversation groups who charge off-shore cage operations degrade water quality by discharging hundreds of tonnes of phosphorous, nitrogen and solid waste.

Meeker said he has 20 years of government-inspected data that proves otherwise.

“We've challenged (opponents) for the last 10 years to show any scientific evidence that there's a problem with these operations and they have not done that once. I'll challenge them anytime, anywhere.”

He's hopeful of a bright future ahead with job applications coming into the association from young people graduating from fish and wildlife programs who are eager to get into business.

He's also said he was “hugely impressed” with the leadership shown by Ontario Natural Resources Minister Donna Cansfield who put the onus on the industry to prove it was environmental sustainable.

“Like everyone else, I'm pretty cynical about politics, but if she were running for Prime Minister, I'd vote for her tomorrow.”

Northern reps selected for municipal board
Aug 19, 2016 1:59 PM
Comments
We welcome your feedback and encourage you to share your thoughts. We ask that you be respectful of others and their points of view, refrain from personal attacks and stay on topic. To learn about our commenting policies and how we moderate, please read our Community Guidelines.