The log yard is filled with two months’ worth of inventory and activity is humming at Columbia Forest Products’ veneer plant, east of North Bay.
Sep 1, 2016 2:23 PM By: Ian Ross 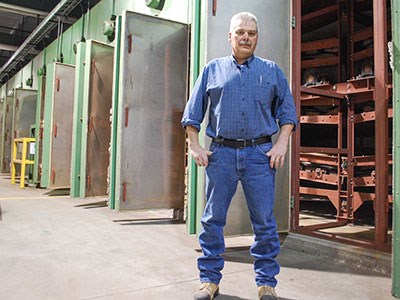 The log yard is filled with two months’ worth of inventory and activity is humming at Columbia Forest Products’ veneer plant, east of North Bay.

After being mothballed for five years, operations at the hardwood veneer mill in Rutherglen resumed April 18 running one shift of 52 employees.

Without delving into production numbers, mill manager Peter Loy said since the reopening, things have gone well as the operation continues to its ramp-up toward full production.

Heading into 2016, Northern American veneer demand wasn’t exactly bursting at the seams, but it had improved sufficiently enough for Columbia to make the decision to restart the 100,000-square-foot mill it had shuttered in 2010.

Loy said it’s difficult to forecast if the veneer markets will show signs of improvement over a sustained stretch.

“Nobody can look forward any more than a few months and say, ‘it’s going to be a banner time’ or ‘no, we’d better think about slowing down.’

“Historically, there’s a cycle to appetites through the year and typically it slacks off toward the end of the year and picks up early in the new year. It has to do with inventories and costing over the year-end.”

The U.S. remains the No. 1 global importer of hardwood veneer.

“One of our largest competitors for our end product, being plywood, is China,” said Loy. “And they’ve eaten up a whole lot of market share in North America with their imports. As far as veneer goes, they’ll always be imports for sliced and specialty woods – things like that – but it’s not a big bite of our lunch.”

The mill’s primary product is four-by-eight sheets of veneer, pulled off the log and clipped at the four-foot mark. Smaller and narrower pieces are spliced together to make a full sheet, but that’s currently being done at other mills.

Come January, Loy expects to reactivate their in-house splicing department, a move that will mean hiring another 10 to 12 staff.

Loy paid credit to the company’s log procurement team on doing a great job of sourcing raw material from both Crown and private sources.

The reopening of the Rutherglen mill, announced prior to last Christmas, was greeted with great enthusiasm by locals.

“There’s a lot of excitement in the area,” said Loy, who grew up in a nearby township and began his career on the same production floor in the early 1980s. “We’re doing business with a lot of suppliers again. We have even more that want to come on board. It’s pretty widespread, actually.”

At this time, Loy said, there are no plans to add a second shift.

But the job applications continue to arrive.

“Definitely,” said Loy. “They’re still coming in. I think they’re hoping (we’re hiring). It’s going very well and the employees are glad to be back.”