A Thunder Bay natural resource consulting firm is taking to the skies with the purchase of its first unmanned aerial vehicle (UAV) for aerial imaging and mapping applications.
0
Feb 5, 2014 2:40 PM By: Ian Ross 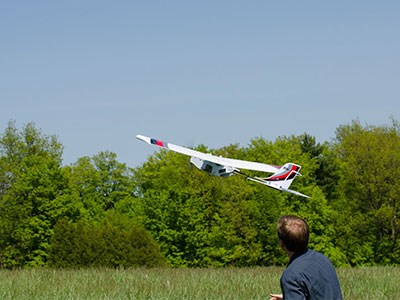 Sumac Forest Information Services of Thunder Bay will be testing its newly acquired UAV this winter to showcase its capabilities to its forestry clients this year.

A Thunder Bay natural resource consulting firm is taking to the skies with the purchase of its first unmanned aerial vehicle (UAV) for aerial imaging and mapping applications.

Sumac Forest Information Services took delivery of its Lancaster Hawkeye MK III over the Christmas holidays and began test flights of the vehicle produced by Precision Hawk of Toronto.

“We’ve been looking at this technology for about a year and a half,” said Todd Domney, one of three coowners of the 19-employee firm established in 1996.

Adding the UAV is a part of a larger technological shift for the company which began collecting ground-based data to support forest management and now has been increasingly moving into high-end digital mapping.

“Getting into the aerial imaging is something new for us,” said Domney. “We were a bunch of timber cruisers and we were very good at it but the industry downturn and the shift in focus with the Ministry of Natural Resources back into the inventory business with the EFRI (enhanced forest resource inventory) program has really changed the focus for us.”

At an industry trade show, Sumac started discussions with two UAV makers before they settled on the Precision Hawk as their vehicle of choice.

Formerly known as Winehawk Labs, Precision Hawk had been extensively working in the Niagara Peninsula, flying the vineyards and orchards to monitor crops.

“In chatting with these guys I soon realized that precision agriculture stuff has a huge crossover into forestry and other kinds of applications,” said Domney.

Weighing three pounds and measuring three feet from nose to tail, the aircraft is described as a “fly and forget” platform.

A fully autonomous vehicle, it can be simply hand-launched by a user and programmed to fly a boxed area of interest. An internal intelligence and guidance system assesses weather conditions and wind direction and the aircraft sets up its own flight pattern to gather the appropriate data that can be transferred to a software platform.

With a price tag of $40,000, Domney said it’s reasonably affordable compared to other high-end systems.

Sumac’s UAV is outfitted with a camera and an 18.5 mm lens for high-resolution photography.

If clients demand it, Domney said, they can attach Lidar, hyper-spectral, visual and thermal imaging devices and a host of other sensors.

The company plans to hold demonstrations for clients in the spring.

Technology has changed the whole dynamics of how forest stands are quantified and what value can be placed on fibre.

Rather than mapping forest depletions (harvesting activity) once a year, “with this technology, you can fly the day you finish harvesting.” “Because it’s high resolution, you can measure how much biomass is left on the site.”

There’s been a global explosion in the use of UAVs for a variety of applications, but Domney said for now they’re taking baby steps.

“We’re starting with the animal that we know which is forestry. But we’ve also done some testing over aggregate pits and we’ve chatted with a few people involved in run-of- the-river power developments and right-of-ways. There’s lots of interest in it but it’s sort of about getting our feet firmly grounded and getting started.”

Domney said it’s spawned an internal company discussion on what the possibilities might be in mining, engineering and surveying.

“We want to get into all that stuff,” said Domney. “I have a geomatics guy saying that the technology we have is the tip of the iceberg that we want to apply to many things.

“Hydro developments and corridors will all get flown for engineering purposes, and aggregates and miners want accurate volumes of their stockpiles on what they’re taking out of the ground every month.”

Domney said he’s not sure they want to diversify and branch out to become an engineering or GIS company.

“I think it’s important to stay focused on what you know and do well. If we can take the technology and apply it to other sectors and build it up that way I think that’s an exciting thing.”