With the northwestern Ontario’s forestry industry on the rebound, municipal leaders vow to continue lobbying the provincial government to keep up the flow of wood fibre to this region’s sawmills.
0
Jun 6, 2016 1:31 PM By: Ian Ross 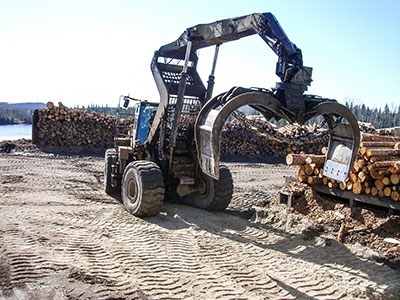 Northwestern mayors are vowing to keep the flow of Crown fibre to the area’s rejuvenated sawmilling industry.

With the northwestern Ontario’s forestry industry on the rebound, municipal leaders vow to continue lobbying the provincial government to keep up the flow of wood fibre to this region’s sawmills.

The looming spectre of the Endangered Species Act (ESA), and coming changes to the province’s forest management planning manual, has mayors of forestry towns worried that an ideologically-based agenda at work to protect the habitat of woodland caribou may threaten the availability of Crown wood supply to industry.

Canfield said there are areas of the northwest where there is no logging or human interaction with caribou yet the animals are, mysteriously, disappearing.

His fear is that environmental special interest groups will convince the province that the forestry industry is endangered caribou habitat and Crown land will be taken out of use. Protection of habitat is already covered in forest management licences, said Canfield arguing that the requirements of the ESA are duplication.

The environmentalists realize it holds things up and drives up the cost of doing business when it’s already covered.”

Atikokan Mayor Dennis Brown echoed that industry must be assured that it will have reliable access to annually harvest 26-million cubic metres of Crown fibre.

With Resolute Forest Products operating a new sawmill in his town, delivering 90 direct jobs plus many more in harvesting and transportation, “they need to sure of a wood supply.”

Brown expects the government will incorporate aspects of the ESA into the forest management manual by July 1, and he promises to keep up the fight to stop it.

He made a joint presentation to delegates with FP Innovations, the federal forestry research arm, that responsible and sustainable harvesting is good for the Northern boreal forest and actually fights climate change.

“The Northern boreal is a 100 to 150-year forest. It’s going to die and all that carbon dioxide goes back into the atmosphere.”

If it’s not harvested and is allowed to burn, become diseased and infected by insects, the environmental costs are incalculable as billions of tonnes of carbon dioxide is released into the atmosphere, he said.

“If you cut it and sequester it and plant new trees…it will have a positive environmental impact.”

One cubic metre of lumber – about 120 two-by-fours – sequesters 780 kilograms of carbon dioxide, said Canfield, who wants to make a personal presentation to the premier.

While the Energy East Pipeline has become a hotbed for controversy, NOMA has come out in support of it, provided measures are taken to protect water crossings.

“Pipelines are, by far, the safest way to transport oil,” said Canfield. “Nothing is safer or more environmentally friendly.

“We are going to continue to burn oil for the foreseeable future and if you’re going to transport it how should you do it? The safest way possible is by pipeline,” said Canfield.

Inter-city bus service, or the lack of it in the region, was one message that delegates vow to keep on the radar of provincial politicians and bureaucrats.

NOMA previously endorsed a report by Common Voice Northwest proposing subsidies to improve the way of life for residents in the region that takes up two-thirds of Ontario’s land mass.

“Northwestern Ontario is the only part of Ontario that doesn’t have subsidized land transportation,” said Canfield.

On a friendlier note, the historically adversarial relationship between municipalities and the Municipal Provincial Assessment Corporation (MPAC) appears to have a more congenial tone.

A presentation by MPAC president Antoni Wisniowski and a new outreach campaign by the provincial land assessor to better explain their methodology for assessing property seemed to resonate among delegates.

“I think the whole relationship has improved tremendously,” said Canfield. “It was just a refreshing approach.”

Discussion the Ring of Fire mineral deposits was minimal, but Canfield repeated a refrain uttered by many in the northwest: “build the roads to the First Nations first, and the rest will come naturally. Flow-through shares does nothing for mining, infrastructure does.”