While Ken Doupe felt the effects of the decline in the forest industry five years ago on his logging company, he wasn’t quite ready to throw in the towel.
Jul 29, 2013 2:42 PM By: Liz Cowan 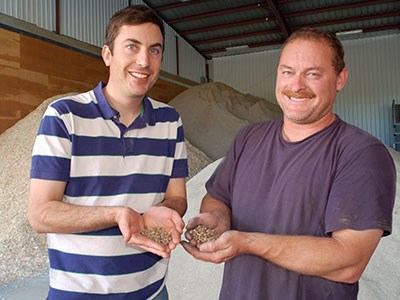 Marc Hamelin (left) and Ken Doupe of KD Quality Pellets are preparing to ship pellets from the New Liskeard area to customers in Europe.

While Ken Doupe felt the effects of the decline in the forest industry five years ago on his logging company, he wasn’t quite ready to throw in the towel.

“I always liked working in the bush and wanted something else to do with forestry,” said the president of KD Quality Pellets.

Two years and a great deal of research later, he decided that a pellet plant would be a feasible endeavour. The pellet producer, located north of New Liskeard in Harley Twp., is ready to make the transition from idea to a producing plant. It was expected to become operational by the end of July.

“It’s been quite a learning experience,” said Doupe.

Along with operations manager Marc Hamelin, he spent time in B.C., the United States and parts of Europe gaining insight to the industry and sourcing the right equipment.

“We spent a couple of years trying to get the right equipment and we did a lot of checking on companies that made pellet presses,” he said.

The plant will produce 45,000 tonnes of industrial pellets a year, with 95 per cent of their product going overseas to countries like the U.K. and Italy.

“We spent a few years looking at the market and right now it is pretty much overseas. We are still behind here compared to Europe. But, we are hoping to get more domestic markets over time and that is what our plan is,” said Doupe.

In Italy, most homes are heated with wood pellets and they can easily be purchased at convenient locations such as grocery stores.

“We weren’t surprised we had to go overseas since the market in North America is not as developed as Europe,” Hamelin said. “There is a small domestic market for wood pellets, but it’s in the infancy stage right now in North America.”

The plant is also planning on a second stage, which is set to be completed by March 2014, that will add another 140,000 tonnes to its production.

“We have secured a wood supply, but we are not using it for phase one since we don’t have a dryer right now,” said Hamelin. “We are buying dried fibre from area mills, which is their byproduct, and we can chip it if we have to.”

Once the plant is operational, there will be about 10 employees and another 12 will be hired when the second phase is completed.

“The wood pellet is naturally made and there are no chemicals in the process or in the wood we are buying,” Hamelin said. “All we might have to add is some water.”

From the fibre the plant buys, a wood dust is made and then put into bins. That material ends up at a hammer mill, where the fibre is made into the required size. As well, material other than the fibre, such as small stones, is removed.

“Everything needs to be the right size for the pellitizer plant, which is the pellet press that makes them,” said Hamelin.

The process is computerized and moisture content is checked and adjusted when required. The pellet plant makes its own heat through friction, which melts the lignin in the wood, acting like a natural glue. The pellets then travel to a cooler and the lignin becomes hard and the pellets are formed.

“Different species of wood have different lignin so some companies add it but we don’t. The industrial pellet we are making is a mixture of hard and soft woods,” he said.

The North American market prefers a pellet made from hardwood and in Italy, softwood is used.

The pellets burn clean with no smoke, and less ash is left behind.

The pellet plant will be the second in Northern Ontario. A smaller plant is located in Hearst.

The company has received funding from a joint provincial and federal initiative and from the Northern Ontario Heritage Fund Corporation.

Hamelin, who is a forestry technician graduate from College Boreal, started working for Doupe in 2004.

“I have been on this journey since the beginning and it has been very exciting, right since we started doing the research,” he said. “It has been an adventure.”