Frank Dottori knows he’s sticking his neck out a bit in picking up an idled and bankrupt Hornepayne lumber mill. With so much uncertainty looming this fall over the outcome of the Canada-U.S.
Sep 13, 2016 7:00 PM By: Ian Ross 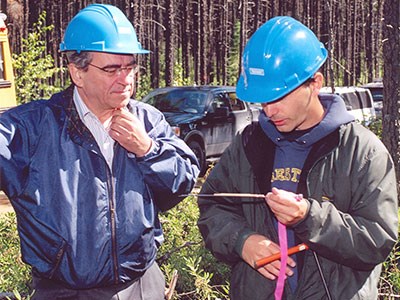 Frank Dottori knows he’s sticking his neck out a bit in picking up an idled and bankrupt Hornepayne lumber mill.

With so much uncertainty looming this fall over the outcome of the Canada-U.S. softwood lumber talks, it may be a headscratcher as to why the semi-retired founder of Tembec went out and bought another lumber mill.

But the Canadian forest industry legend admits to taking a calculated risk on buying the former Haavaldsrud Timber Company in a deal he finalized on Aug. 30.
On one hand, Dottori is optimistic lumber markets will stay strong over the next five years, which should spell sunny days for the sawmilling sector, but on the other hand he had little confidence that the federal mediators will negotiate a fair deal for Canada leading up to the Oct. 15 deadline.

“If the agreement is very onerous then it may prevent the startup of the mill and I’m going to look very foolish. But I’m an optimist.”

Dottori is also CEO of White River Forest Products, a sawmill located 100 kilometres south of Hornepayne on Highway 631, in an ownership arrangement he shares with the town of White River and the Pic Mobert First Nation.

The Hornepayne dimensional lumber mill is “100 per cent” his alone, although he’s trolling for investment partners.

“We’d like the community and region to get involved. We’re hoping the First Nations take an interest. We’re believers that First Nations should invest in regional industry and manufacturing to develop long-term plans. Some of them have approached us indicating an interest and we’re open to talking to them.”

The Haavaldsrud mill had been in receivership since its Nov. 27, 2015 shutdown, putting 146 employees on the street. The previous owners cited financial difficulties.

The court-appointed monitor placed the mill on the block last April with Dottori’s successful bid being picked out of 14 interested parties, purchase price undisclosed.

The lack of a long-term wood supply has been a chronic problem, he said, something he hopes is now rectified with an assurance that 460,000 cubic metres of Crown wood supply would be made available.

“It’s a nice volume that, if we’re smart and do the proper investments, we could make into a good competitive mill.”

The White River and Hornepayne mills will operate as separate entities, but Dottori said there are some “synergies” to be had on better utilizing the wood supply to cut down on haulage costs.

“We have wood right next door to them up north and they have wood next to us down south so we can rationalize the wood supply. Hauling is a big part of wood costs and it allows us to get a reduction on the portion of the wood.”

With some upgrades, Dottori believes Hornepayne can become a “fairly productive low-cost mill.” The production line is fairly new, having been installed in 2009.
But he estimates north of $5 million is needed to modernize the infeed system and introduce new technology. The mill also lacks an auto-grader.

“They’ve got fairly modern equipment. It’s just the mill’s not yet been completed.”

If all goes well, the mill could tentatively restart with one shift by January and two shifts by April.

But Dottori said he’ll need help from the mill’s unionized workforce and the United Steelworkers to find efficiencies and shave costs.

“If it’s a low-cost mill, that eliminates some of the uncertainties and that’s why we have to convince the union in the negotiations that we have to be a competitive mill. If not, B.C. will flood the entire Ontario market with wood and shut us down.”

Dottori also wants to get maximum use from the mill’s 15-megawatt co-generation plant.

The co-gen, which uses sawmill wood waste to generate steam for the lumber kilns, has an Ontario Power Authority contract to supply eight megawatts until 2024.

The $66-million co-gen, which went online in early 2014, was subsidized with $30 million in provincial grants and loan guarantees.

Dottori has sent a letter asking the province to review that contract to allow the co-gen to run at full capacity.

He finds it “unbelievable” that during the second round of the Large Renewable Procurement Process, Northern Ontario bioenergy producers were excluded.

The LRP II is part of the government’s energy policy intended to draw 50 per cent of the province’s installed capacity from renewable energy sources.

With an abundance of available power in the northeast and outdated transmission infrastructure, Dottori lays blame at the government’s feet for delays in the construction of an expanded power corridor in the region, which was supposed to have been completed this year but has been pushed to 2018.

In communities like Hornepayne, where economic opportunities are limited, he said such facilities can create 100 to 150 jobs, and generate $30 million in local spinoffs and government revenues.

“We have a problem understanding why Northern Ontario gets shut out for southern Ontario. We think the government should revisit that and give this plant the potential (it has) going forward.