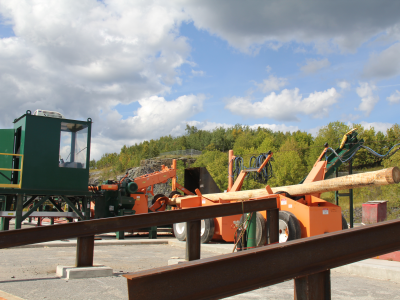 Wincrief Forestry Products has started peeling poles for utility companies on the former Abitibi pulp and paper mill site in Kenora, the location of a future value-added forestry cluster.

Commercial operations are anticipated to start in late October or early November, and the order book is looking good.

“The orders are in,” said Romaniuk. “We have a request that anything we can make will be sold.”

The company's buyer and broker is Trans Canada Utility Pole of Innisfill.

Romaniuk can think of only two Canadian companies engaged in this specialty work. Neither of them are in central Canada.

“We think we can cover off this area and we also have interest from Bell Pole out of the U.S.”

To mark the commercial startup, the company is inviting Natural Resources Minister Michael Gravelle to Kenora in early November as a gesture of thanks for the government's assistance in providing seed funding and Crown wood supply.

Romaniuk said the idea for the pole peeling operation goes back to 2007.

Moncrief Construction, one of the partners in Wincrief Forestry, found there were no utility pole suppliers in northwestern Ontario.

But during its harvesting and line-cutting work, it discovered a number of trees that would make good poles, which spurred a discussion and eventual feasibility study when Gravelle began pushing the concept of value-added forestry.

The company wisely tapped into the Northern Ontario Heritage Fund and the Forest Sector Prosperity Fund which provided more than $700,000 for this project and the company's modular home business. The province also provided a $500,000 loan.

The pole peeling equipment, which is similar to a debarker, was bought from the U.S., and represents a public and private investment of $2.5 million, said Romaniuk.

Plant production is estimated at 15,000 red pine and jack pine poles a year, ranging in lengths between 45 and 60 feet.

The operation employs three full-time First Nation workers and will ramp up to at least 10 with harvesting, trucking and distribution positions.

Wincrief is a joint venture partnership between Moncrief Construction Ltd. and the Wabaseemooong Independent Nation. Most of the workforce comes from the nearby First Nation communities of One Man Lake, Swan Lake and Whitedog.

Wincrief is also engaged in a modular home-building businesss. After a slow start almost two years ago, business is picking up.

“We're currently in production for a duplex that's going up to Red Lake for Goldcorp and the last five homes we've constructed have been for local individuals. We also have CSA (Canadian Standards Association) approval for building and delivery of modular homes.”

Wincrief Homes is the anchor tenant on the former Abitibi mill site near Kenora's downtown. The pulp and paper plant was shuttered in 2006 and most of the production buildings were later demolished.

Now owned by C.B. Richard Ellis of Winnipeg, the city's vision is for the mill property to become a value-added forestry cluster.

But Romaniuk said not all Kenora residents are pleased.

Wincrief is undertaking a noise study this fall after nearby residents complained about the pole peeling operation.

“After five years with no noise, some of our neighbours are less than thrilled with us making noise. They got used to the silence.

Romaniuk said the company remains an active participant in trying to lure more partners to the site and bring new business to Kenora.

Wincrief already has a small sawmill in operation on the site that's making over-sized dimensional timber (8 X 8 and 12 X 12) that can be used for mining and home building applications.

“We have new partnerships with First Nations and we're probably going to have more in the near future. We do recognize the value of working with the communities that surround us and provide us with the resources.”