Dean Caron likes to compare forests to people — they're constantly changing. With more than 20 years in the forestry industry, the industry advisor for FP Innovations in Kenora should know.
Jun 30, 2016 7:54 PM By: Ella Myers 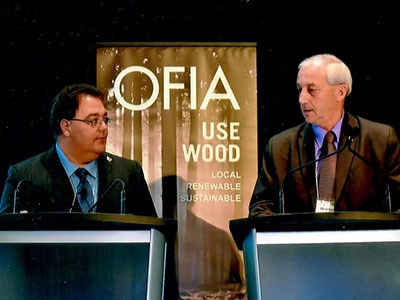 FP Innovation’s Dean Caron and Kenora Mayor are presenting a science-based argument on the benefits of forestry harvesting.

Dean Caron likes to compare forests to people — they're constantly changing. With more than 20 years in the forestry industry, the industry advisor for FP Innovations in Kenora should know.

But this isn't something everybody knows, according to Caron, and he thinks this is where a lot of opposition to the forestry industry comes from.

Caron and Kenora’s mayor, Dave Canfield, are fighting back against what they call bad science and advocating for the facts on forestry in Northern Ontario with a study and presentation called “Trees are the Answer.”

The concept came to be over lunch in April 2015, with Caron describing to Canfield some work he was doing to educate children about the way forests regenerate after deforestation, and how the forestry industry's harvesting methods resulted in something more akin to reforestation.

Canfield, who also has a background in forestry, was intrigued.

“It's something I've wanted to do. It's been a passion of mine to tell the real story that's going on out there,” said Canfield.

The real story, they say, is that forestry, and methods including clearcutting, can be a source of sustainable jobs in Northern communities and offer sustainability to the environment by sequestering carbon.

“I’m not going to defend the way clearcutting looks — it doesn’t look nice — but it’s not supposed to look nice whether it’s man-made or not,” said Caron. “It might look horrible right now but it comes back, and it comes back very quickly.”

Ontario’s land mass is over 60 per cent forest and many species rely on forest disruption. They also have a relatively short lifespan, and if left to their own devices, Canfield said they can wind up doing more harm than good.

“The Northern Boreal forest is a 100- to 150-year forest. It’s going die and all that carbon dioxide goes back into the atmosphere,” said Canfield. “It has to be cut and sequestered. But nobody ever says that.”

Canfield said the study revealed clear numbers on how much carbon can be sequestered.

Caron and Canfield insisted that despite the strength and positive impact the forestry industry has in their communities, the study was not done to benefit them, nor did they impact the findings.

“The industry has no fingerprints on this study at all, it's just science,” said Canfield. “It might look like it's for the industry, but it's for us; it's for the people in Northern Ontario.”

“It's based on the best and most recent information we have,” said Caron. “It’s about informing people.”

Caron said that many policymakers in the south are unaware of the benefits of forestry, and have had their opinions shaped by advocacy groups who don't fully understand the science.

“The intent of the project to build capacity among leaders in Northern Ontario,” said Caron. They will be presenting their findings across the North in the coming months.

The study comes as the industry is slowly recovering from a decade-old downturn, but they hope it will play a part in encouraging economic development in the sector and the demand for sustainable building materials and fuel rises.

“I am convinced the industry is rebounding in the North,” said Canfield.