Mixing waste from two of Northern Ontario’s most prominent industries may one day lead to the production of greener fuels, if research projects in Timmins and Sudbury are any indication.
0
Nov 4, 2008 7:02 PM By: Nick Stewart 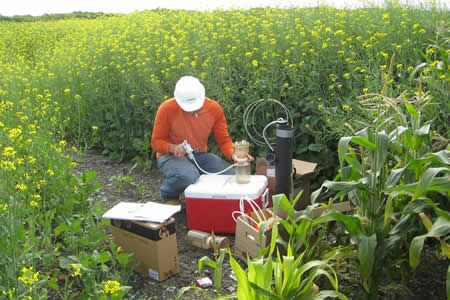 This year's research efforts by MIRARCO to grow corn and canola crops upon mine tailings in Sudbury and Timmins, using forestry industry waste as a base, were a success.

Mixing waste from two of Northern Ontario’s most prominent industries may one day lead to the production of greener fuels, if research projects in Timmins and Sudbury are any indication.

This year, scientists from the Mining Innovation, Rehabilitation and Applied Research Corporation (MIRARCO) have successfully used forest industry waste to grow their very first yield of corn and canola crops upon mine tailings across the North.

The goal, they say, is to produce crops which could eventually be used in the production of biofuels, while doing away with many of the controversies held by typical growth of such crops.

“Normally, people are upset that good arable land is being used up at a time where that space could have been used to produce much-needed food for human consumption,” says Alan Lock, a senior researcher with MIRARCO.

“With the crops being grown on mine tailings, where people wouldn’t likely want to their food to be grown, it’s a positive for all sides since it creates potential fodder for biofuel and creates a positive use of the tailings.”

To grow their first successful run of specialty hybrid corn and canola crops, researchers covered tailings belonging to Xstrata Nickel and Vale INCO in Sudbury and Goldcorp in Timmins with an organic cover, which often reached up to a metre thick.

Using this highly fibrous mixture, researchers were able to grow a surprisingly strong yield, even through the intemperate weather drastically reduced their season. Rather than having the 90 to 100 days typically needed for successful growth, the first plots were given just 60 to 70 days, having been planted in July.

A number of local farmers and other agricultural producers were given a tour to examine the results, and each of them came away impressed, says Graeme Spiers, director for MIRARCO’s Centre for Environmental Monitoring.

Equally impressed with the results were the Timmins crows, who proved particularly fond of the corn crops, leaving little more than the canola still standing at that test site by the end of the growth period.

“They just mowed it like a lawn,” says Spiers.

In the coming year, the project will feature another run of testing with the same project partners, though with a slightly different focus, as the scientists’ green thumbs have indeed been validated.

The goal is now to determine the actual feedstock quality of the crops for use as biofuels.

Other crop types beyond corn and canola are under consideration for next year’s testing, though these will depend on the successful application for additional funding.

All in all, expectations for the coming year are strong, given the results seen through the 2008 season.

“We’ve had a lot of luck thus far, and everything we’ve seen has been very encouraging,” says Spiers.

The overall project is slated to cost $2 million over a three- or four-year period, with the vast majority of the costs being made up of the transportation of the forestry sludge from the pulp and paper mills to Sudbury and Timmins, as well as the establishment of the test sites.

This funding is being provided by a number of sources, including various levels of government, with some financial contributions coming from the private-sector participants.

For instance, the money St. Marys Paper would have paid to dispose of its waste instead went to the research project, making the proposal a cost-neutral one for the company.
The project has had a long and storied past, with research scientists at Laurentian University having first examined a similar idea in the Elliot Lake uranium camp in the late 1990s.

Four years ago, discussions for the project were revived when talks were initiated between the Porcupine Joint Venture -- now Goldcorp -- and AbitibiBowater in Iroquois Falls to use an organic cover to suppress dust and grow traditional reclamation plants.

These talks prompted local scientists to take a second look at pursuing their former research efforts.

What’s more, Bryan Tisch, who moved on from Sudbury to join Natural Resources Canada as a senior environmental scientist, has since started a national initiative to grow alternate fuel crops on tailings laden with organic covering.

Now working with this national agency, MIRARCO is just one of a number of Canada-wide efforts, including others in the oil fields of Alberta and with Teck Cominco’s Highland Valley Copper mine in southern British Columbia.

Although the project has since taken on a national scope, the Northern Ontario effort is the first among the Canadian partners to successfully produce a crop.

These early successes have also had some indications that the research may have other beneficial side effects.

Beyond the stronger-than-expected level of crop growth, the thick, heavy organic covering also appears to be able to stop acid from leaching from the tailings into the soil.

Spiers says that this, too, will be further investigated as the project moves forward.