An Ojibway community on the north shore of Lake Superior is carving out a path to prosperity in forestry.
Feb 2, 2016 6:59 PM By: Ian Ross 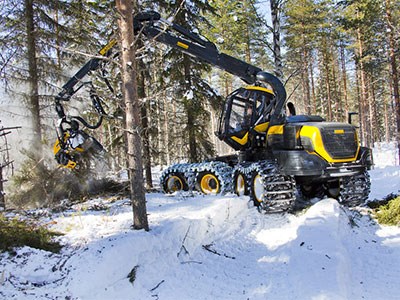 Biigtigong Nishnaabeg has launched a forestry enterprise built around the purchase of new forestry equipment imported from Finland.

An Ojibway community on the north shore of Lake Superior is carving out a path to prosperity in forestry.

Biigtigong Nishnaabeg (formerly Pic River First Nation) has taken possession of new European-made harvesting equipment to launch a forestry company to start harvesting off its traditional land this winter. Coupled with that is the news of secured contracts to start supplying two area forestry mills with wood.

Under the banner of Mkwa Timber, the band’s fledgling forestry company, two harvesters were purchased from Ponsse of Finland, a leading international forestry machine manufacturer.

An Ergo and an eight-wheeled Scorpion King arrived off the boat in Canada on Jan. 28 and were shipped to Timmins for inspection before arriving in the community for a scheduled public showing on Feb. 5.

The band had been working on the contracts through the Nawiinginokiima Forest Management Corporation to harvest softwood for Birla and saw logs for White River.

LeClair said Pic River holds a legacy commitment from the province for exclusive harvesting rights on the Pic River Ojibway Forest and is moving toward securing the same on the Big Pic Forest, the management unit surrounding the community.

“It’s Terrace Bay’s wood to receive, but it’s our right to harvest,” he said. “I say this tongue-in-cheek, companies come and companies go, but Pic River First Nation is going to be here for a long time.”

The community previously had its hand in commercial harvesting back in the early 1980s, supplying the former owners of the Terrace Bay mill. But the bush work was contracted out, which did little to develop local capacity and build a skilled workforce.

“Before we were a stump-to-dump operation that relied heavily on one contract,” said LeClair.

“We’ve been burnt on that Terrace Bay mill before. The previous owner declared bankruptcy and we lost substantial amounts of money for wood (harvested) that was never paid for.”

The arrival of Birla in Terrace Bay and the restart of the former Domtar sawmill in White River provided the impetus for the band council to get back into the business in 2013.

“This approach was intended to create career opportunities (for community members),” said LeClair.

In procuring equipment, the band’s forestry board heard presentations from three major suppliers but came away impressed by the innovative technology offered by Ponsse and its commitment to provide on-site training.

“This is high-tech, leading-edge equipment,” said LeClair. “The industry has always been challenged by companies like Ponsse that take a new approach to how things are done.”

LeClair declined to say how much the equipment costs, but “it’s in the millions of dollars.”

The “strength of the investment” came from revenues derived from Pic River’s stable of hydroelectric generating stations on the White, Kagiano and Black Rivers.

“It’s a difficult process to get into forestry, but certainly when have you have supporting enterprises like Pic River Energy, it makes that process much more attainable.”

The equipment operators spent two weeks of training at Ponsse’s North American headquarters in Rhinelander, Wis. and another four weeks in their home community.

“We’re going to see where we are after nine months and I’m projecting right now that we are going to be buying more equipment,” said LeClair. “I see incredible growth potential here for us.”

Down the road, LeClair, who worked on the band’s power developments, has some value-added, job-creation forestry projects in mind, including a commercial hardwood firewood business and possibly a pellet mill geared to a residential consumer market.

“First, we’ve got to develop our competency around harvesting first to become an efficient low-cost harvester and supplier to the mills,” said LeClair.

“The important point that’s not lost on me is that it’s not about just creating jobs for Pic River, it’s about supporting those jobs that already exist with Birla and in White River. They’re only as good as their supply chain and we want to be an important part of that.”

Whenever construction of the east-west transmission tie starts, the province’s proposed 400-kilometre long electricity line between Thunder Bay and Wawa, LeClair said Biigtigong Nishnaabeg wants to be part of the action.

“This investment in (forestry) capacity is really a signal to Ontario that if you want to build a line in our territory, we want the contract to clear.”

The band has future plans for more hydroelectric stations along with wind and solar farm projects, including one in southern Ontario, he said.

“The wind hasn’t stopped blowing. It’s our ability to reach the market, in terms of access to the transmission grid, that has been constrained which has put the damper on transmission projects in the North.”