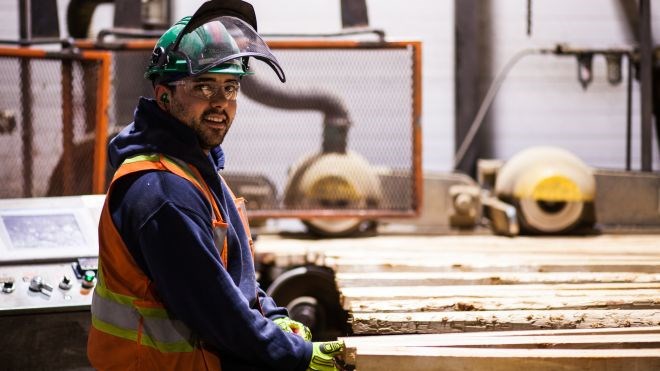 EACOM is currently advertising for workers at operations across Ontario and Québec, but finding skilled and unskilled labour is an increasing challenge. (EACOM photo)

A job seeker looking for work in the forestry sector would have hit the jackpot after stopping by EACOM’s recruitment website in April, where there were posted no fewer than 31 job openings across its various locations.

“We’re really having a hard time with skilled and unskilled labour, and this isn’t just a problem of EACOM,” said Christine Leduc, the company’s director of public affairs.

And the shortage isn’t limited to just the companies, Leduc added. Even contractors are having difficulty filling vacancies.

The problem is multi-faceted, Leduc said, and only grows larger as the aging Canadian workforce retires out of the industry without new generations to take their place.

Eighty per cent of Canadians live in cities, and prospective employees can be turned off by the more remote locations of the company’s operations. Encouraging a young city-dweller to relocate to Ear Falls or Matagami can be a hard sell, Leduc concedes.

Others are scared off by the softwood lumber trade tariffs imposed by the U.S. in early 2018 – the fifth such iteration – leery of joining an industry that is in perpetual turmoil.

Yet, current lumber prices are high, and EACOM in particular has enjoyed substantial growth in the last five years, investing millions into its operations, through expansion, acquisition and adding new equipment.

Last September, for example, EACOM installed a continuous dry kiln at its Timmins sawmill – the first of its kind in eastern Canada – which increased its production to 160 million board feet.

Those improvements have paid off.

That increase has required hiring to match: in 2014, the company’s workforce totalled at 820 employees. Today, that number sits at 1,161 people.

“We’ve experienced some tremendous growth, so I don’t like to hear that the sector is a ‘sunset sector,’ because we feel like now is our time and we’re becoming this great force in Ontario,” Leduc said.

To help get the message across, EACOM has had to be creative in order to entice new workers and combat some of the negative perceptions the industry has had a hard time shaking.

One of the company’s preferred strategies is to generate interest early on by connecting with high school students. Seeing the operations in action – whether it’s in forest management or at the sawmill – helps future workers see what opportunities await them should they choose a career in forestry.

“I think most people are not aware of the diversity of positions that you can have if you’re in the forestry products sector,” Leduc said.

In September, EACOM hosted a session of Forestry Connects, an outreach initiative of Forests Ontario, in Timmins. The company brought 30 local high school students into the bush to experience what it’s like to sit in the cab of a brand-new Ponsse Scorpion King processor.

With its videogame-like joystick controls, it’s the kind of machinery that appeals to an up-and-coming generation that’s looking to apply its skills in a challenging, high-tech environment, Leduc said.

“For a contractor to park his machine for one hour while high school kids get into the machine, just to see how it feels and what does it look like when you're in the operator cab, I think that shows that our contractors are just as concerned as we are about the need to attract youths to our industry,” Leduc said.

It helps that EACOM pays well above minimum wage, which means the average worker can make a very decent living in the sector, Leduc added.

The company knows it can’t control outside factors, and so has determined to instead concentrate its efforts on what it can control.

“We’re really focused on continuous improvement, exactly to make sure that we’re able to weather any storm, whether it’s the softwood lumber trade war today or another downturn in the market in 10 years,” Leduc said.

“Hopefully people want to be a part of that kind of company.”