Cooking up a superior value-added solution

If the state of the forestry industry resembles the charred landscape after a devastating fire, Superior Thermowood would be a tiny green shoot of regrowth poking through the ashes.
Jun 22, 2009 3:11 PM By: Ian Ross 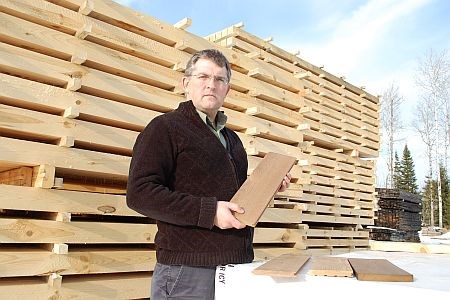 Superior Thermowood's Kevin Green has been working to re-engineer an innovative high-temperature kiln process that boosts the structural integrity of wood.

If the state of the forestry industry resembles the charred landscape after a devastating fire, Superior Thermowood would be a tiny green shoot of regrowth poking through the ashes.

Inside a locked shed in Murillo, about 20 minutes outside Thunder Bay, the innovative small value-added forestry company has spent seven years working out the bugs of a wood kiln technology that is ready to be rolled out commercially this summer.

The company took an internationally-licensed system from Finnish company VTT, which was used to treat raw wood and re-engineered it to cook lumber without weakening it in the process.

The plan is to sell both the kiln technology and the thermally-modified wood, the latter through a spinoff company, ThermoForest Products.

Company president Ed Rose admits the timing of their roll-out is economically the worst, but the potential to resurrect many suffering forestry communities has never been better.

They'll start out this summer by cooking dimensional lumber, aimed at the decking and fencing market and selling it through Petersen's Building Supplies in Thunder Bay.

It will be marketed as the alternative to pressure-treated lumber and cedar decking products. The company aims to source Northern Ontario wood that has traditionally been brushed off by industry as low value species such as tamarack, birch, black ash and poplar.

Unlike other thermal processes, this system doesn't structurally degrade wood at a molecular level, but actually strengthens its cellular walls.

It also makes it moisture and fungal resistant. No chemicals are used and the Superior Thermowood process brings out the grain.

How high and how long the wood cooks depends on species and moisture content, but a batch can take from 32 to 48 hours.

Rose said thermally-modified wood processes are not mainstream in North America and have only been tried as a "boutique" level with limited success.

The Europeans are more advanced and have created a market niche that's competitive with composite products on pricing structure.

For more than a year, the company has been distributing samples of their kiln-dried four-by-four's to select customers. The potential for a healthy order book looks good.

Rose is being very shrewd and cautious about not getting too big, too fast.

Though reluctant to disclose his limited production numbers, he wants to build a trained workforce to coincide with their expansion plans and the anticipated heavy consumer reaction.

"I have orders I have to ignore because I can't fill them with the capacity that I've got."

Years before, one of Rose's colleagues had eye-balled the heat-treated system in Finland and struggled to replicate in Thunder Bay.

Rose said it's been a hard slog to make major strides "than take four steps back."

Among the hang-ups were controlling the air flow inside the kiln and problems with the cool-down phase. Then there were stringent Ministry of Environment procedures to follow.

"Less stubborn people would have thrown in the towel but all of us were so committed to the project that we knew it was going to be a success."

With the help of Mat Leitch, a Lakehead University wood sciences professor, they've mastered the process.

As a consultant, Leitch strength-tested the kiln samples and performed other technical evaluations at his on-campus lab. He helped re-engineer the first prototype, and wrote the proposal to score some Living Legacy Trust funding for a 32,000-board-foot production-scale unit now on the drawing board.

Leitch said the original version didn't work well because the heating unit was mounted on top of the kiln instead of at ground level to allow heat to rise from the bottom.

"We band-aided it up to the point where we got subsequent funding to build the production unit."

He's long believed that small, innovative companies like these can be the new face of the forestry industry.

"It's going to create many opportunities for value-added manufacturers in the North," said Leitch. "They're hoping to have a few units running in this region as well as southern Ontario.

"I can see cluster groups of secondary producing companies built up around these units to take their raw material from the unit and turn it into furniture."

Watching and waiting on the sidelines are interested manufacturers of windows, doors and cabinets. Some forestry towns in Northern Ontario and Quebec are also keenly eyeballing this technology.

Rose said it could breathe new life into these communities in retrofitting closed up saw mills.

A typical three-dryer operation would provide 25 to 30 direct employment and scores of spinoff jobs in harvesting, milling and trucking.

He intends to build an alliance of empowered communities across North America armed with this technology and has an ambitious 10-year vision to roll out 50 plants running 155 dryers.

"We're trying to build an alliance where we reduce our overall technology costs and take equity positions in helping (the communities) run it," said Rose.

Instead of having communities competing against each other, spending dollars on science and marketing, Superior Thermowood would do that for them.

For Lakehead University, as the company's unofficial R&D arm, its relationship with the company is turning out to be the gift that keeps on giving.

Superior Thermowood has finished drawings for a mini-kiln on a heavy duty tandem trailer which will be parked at Lakehead behind Leitch's lab. Students will use it for projects and can be a demonstration unit on wheels.

The kiln technology could also be the cornerstone of Lakehead's NORD 21 concept, a proposed research centre of excellence for sustainable natural resources.

"It's a reciprocal arrangement that's going to have some real long-term impact," said Leitch.

There could be a pipeline of job opportunities for his graduate students because of their knowledge of wood properties and quality.

Leitch, who has studied internationally, said there are huge opportunities to sell kilns in the southern hemisphere. This thermal process releases the high growing stresses typical in tropical hardwoods which are tough to saw.

Theoretically, test batches of lumber could be sent to Lakehead and a cooking recipe could be brewed up for a particular species to turn into a marketable product, said Leitch. "And if they're interested, they can buy a kiln."

North Bay drone company taking a lead on responsible forest management
Nov 23, 2020 3:00 PM
Comments
We welcome your feedback and encourage you to share your thoughts. We ask that you be respectful of others and their points of view, refrain from personal attacks and stay on topic. To learn about our commenting policies and how we moderate, please read our Community Guidelines.