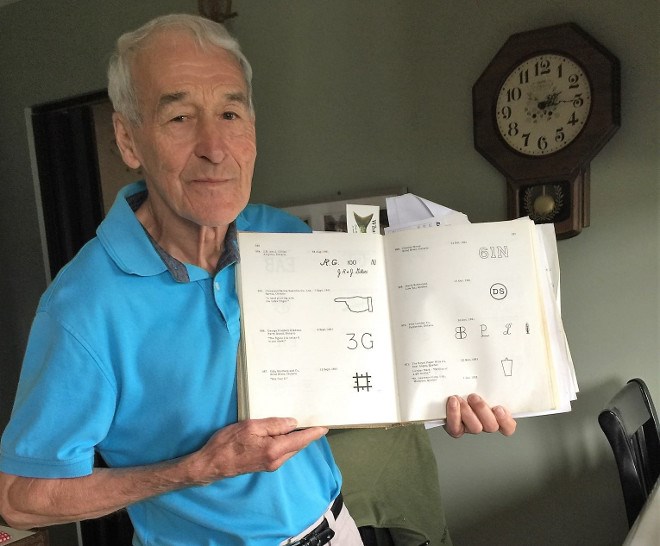 Espanola author John Haegeman has published a new book – The History and Location of North Shore Logging Camps – which details the history of logging camps along the North Shore of Lake Huron. (Rosalind Russell/MyEspanolaNow.com)

John Haegeman spent four decades researching the history behind some of Northern Ontario’s earliest logging camps. Now the 84-year-old Espanola author has compiled his work into a new book.

The History and Location of North Shore Logging Camps is a 250-page compendium chronicling Haegeman’s adventures visiting 300 logging camps along the North Shore of Lake Huron, which were operational from the 1880s to the 1940s.

For each entry, he’s included the date he visited, the camp’s GPS location, and the story of the journey to get there. He’s also incorporated histories of about 40 of the companies that operated in the region.

Perhaps, most interestingly, is the inclusion of details about the camps’ stamp hammers, also known as log hammers.

Resembling a long sledge hammer, each tool had a different symbol forged into its head, and they were used to “stamp” the ends of harvested logs before being floated down river in large booms. In this way, a company could track its inventory and prevent theft by rival loggers.

Haegeman said he’s lost count of exactly how many stamp hammers are in his collection, but a conservative estimate puts it at between 200 and 300.

“(I have) several favourites,” he said from his home in Espanola, a pulp-and-paper town located about 45 minutes west of Sudbury.

“Some I looked for for 20 years, some 30 years, and when I finally found one it was like winning the lottery.”

It was his interest in stamp hammers that sparked the start of his research 40 years ago.

A fur trapper and taxidermist by trade, Haegeman was attending a trapper convention in North Bay in the 1980s when he befriended a fellow trapper. Knowing Haegeman’s penchant for collecting, his friend suggested he start looking for the artifacts.

“I said, ‘What in the world’s a log hammer?’” Haegeman recalled. “He explained what they were and their use, and I knew that we live in an area full of old logging camps, so I started going out, and I found my first hammer, and that’s how I got interested in it.”

Each stamp hammer was unique to the company that used it. Some were comprised of symbols like asterisks or a company’s initials, but others were more elaborate in design.

A complete catalogue of stamp hammer symbols and their associated companies is available in the now out-of-print Registered Timber Marks of Eastern Canada, by Diane Aldred, which Haegeman used to identify and authenticate his finds.

One of the more unique hammers depicts a triangle with a thistle inside it. It was forged for James Thistle, who operated a timber operation in the Renfrew/Pembroke area in the mid-1880s, Haegeman said.

Others represent historical significance, such as the one attributed to Alger, Smith & Co., of which Gen. Russell Alger was a principal founder. In 1888, Alger ran on the Republican ballot as president of the United States, but was ultimately defeated by Benjamin Harrison, who served as the country’s 23rd president, from 1889 to 1893.

Located in deep backcountry, many in areas overgrown with thick brush following years of neglect, the camps themselves could be hard to access, Haegeman said.

He and his partners often followed tote roads miles into the bush before discovering the remnants of a foundation, giving up the location of a former mill. In some cases, the camps had fly-in access only.

Established in an era without heavy machinery or rail access, the camps are located below the height of land to take advantage of the river system, Haegeman said, and loggers would build elaborate networks of slides, bridges and dams to control the water.

Haegeman marveled at their ingenuity and perseverance.

“The lumber camp would need about 400,000 pounds of supplies and all these supplies had to be hauled in, 1,000 pounds at a time, by wagon and sleigh,” Haegeman said.

Now in ill health, Haegeman’s days of exploration have come to an end. But he’s hopeful his book helps to commemorate the logging heritage of Northern Ontario.

“I never intended to (write a book),” Haegeman said of his legacy. “But if something happens to me, this information is lost.”

The History and Location of North Shore Logging is available by contacting John Haegeman directly at haegeman@cyberbeach.net or 705-869-2394.