An Ontario first for cross-laminated timber

By the time it’s completed in early 2016, the second phase of Laurentian University’s School of Architecture will serve as a solid example for students of what can be achieved with wood.
Jun 30, 2015 3:06 PM By: Jonathan Migneault 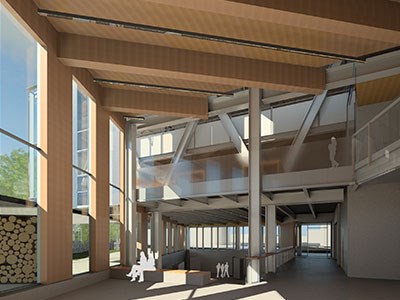 Cross-laminated wood is being incorporated into Laurentian University’s School of Architecture.

By the time it’s completed in early 2016, the second phase of Laurentian University’s School of Architecture will serve as a solid example for students of what can be achieved with wood.
A two-storey structure built with engineered wood products called cross-laminated timber (CLT) and glulam will host classrooms, a second-floor library and a lecture room as part of the school’s 54,000-square-foot second phase.

CLT was developed in Switzerland in the early 1990s, but has not been used in any significant way in Ontario.

The wood products are built in computer-controlled factories, and are made by gluing multiple layers of wood, with each layer oriented crosswise to the next.

The School of Architecture’s West Wing – as it is currently being called – will be the first structure in Ontario to use CLT in a significant way.

The building’s walls, ceiling and roof will be made with the product.

Terrance Galvin, director of Laurentian’s School of Architecture, said the building’s design aligns with the school’s philosophy.
“Wood is really the only renewable resource,” he said.

Building with modern wood products lets students see what is possible with a very old material.

“It’s innovative in that you can make large panels and it meets the fire code, but the tradition of wood buildings goes back hundreds of years, or thousands of years when you think about Japanese temples.”

Because forestry also has a long history in Northern Ontario, wood structures allow students to relate to the local culture, and see the life of the material.

Galvin said students have already visited lumber mills, to see how a tree can be transformed into a building material.

He said a dilemma with modern culture is that people can lose their connection to nature, and forget where things come from.

“You buy food from the store and you may not realize that tomatoes grow on the stock that they do,” Galvin said.

The building, he added, is also representative of a recent resurgence of wood in Ontario construction.

On Jan. 1, 2016, the province’s building code will be amended to allow wood frame buildings up to six storeys in height. Wood buildings were previously limited to four storeys in Ontario.

But the amendment does not apply to universities and government buildings, which are limited to two storeys if they are built with wood.

David Warne, an architect with LGA Architectural Partners, which designed the Larentian School of Architecture, said he hopes to see the building code change to also allow for taller public buildings made of wood.
“It is the future material we should be thinking about in Canada,” Warne said.

While the risk of fire is usually higher in wood buildings, thick CLT panels can be more fire resistant than steel, and almost as effective as concrete, because of their density.