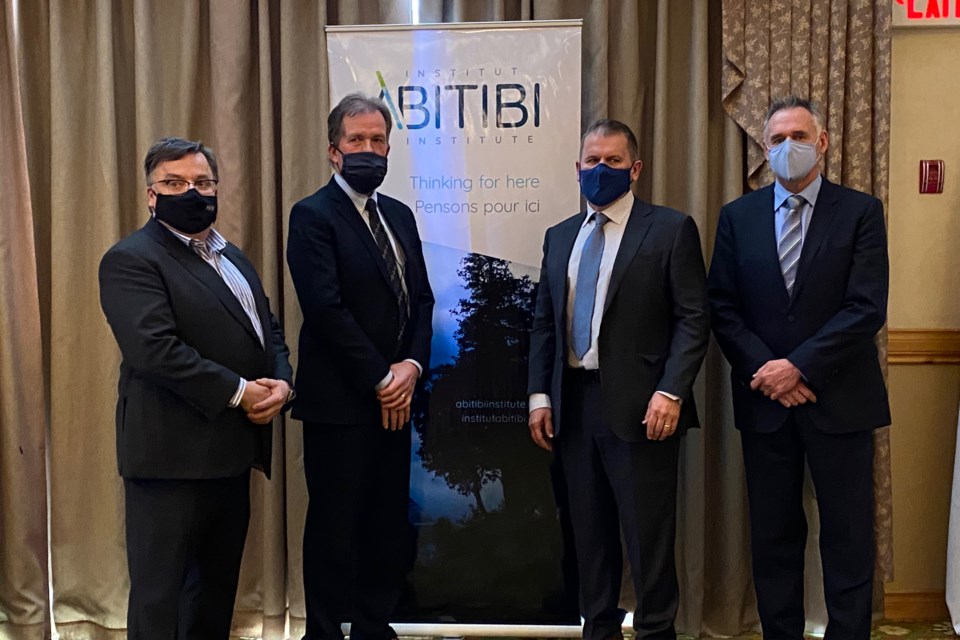 Robert Manseau, George Pirie, Tony Makuch and Gaetan Malette at the launch of the Abitibi Institute on March 25 at Cedar Meadows in Timmins.Maija Hoggett/TimminsToday

A new initiative is looking for a seed to fuel growth in the region.

At an event at Cedar Meadows in Timmins, the Abitibi Institute was launched last week. Its purpose is to serve as a research and policy centre for decision-makers in northeastern Ontario and into Québec.

The institute is independent of government, privately funded, and is seeking charitable status.

“At the end of the day, we’re trying to find economic catalysts and whatever that seed for growth is, I believe that we can find it and then plant it and then hopefully see it grow,” said Manseau after the launch.

There are five main areas of focus: mining, forestry, energy, agriculture and regional governance, he said.

"If we can narrow down what the limiting factor for growth is … because we have economic development agencies in each of the municipalities across the region and those are dedicated individuals that have huge budgets to be able to do stuff," Manseau said.

"They’ve been around for 25 to 30 years – what are they lacking in as far as tools to be able to bring it? We need to be able to source those elements out and give it back to them as a positive solution so we can find that first domino to make a trigger,” he said.

There are no paid staff members, it will be run by a volunteer board, and the research will be commissioned, said Manseau.

The institute will have committees that come up with a question then there will be a call of proposals.

Manseau also explained the difference between the Abitibi Institute and the work already happening at the Northern Policy Institute.

“This is going to be grassroots. We want to be able to go down to the community level, small business level, right to teachers, nurses, and so on and so forth, to be able to get their input and find out what the priorities are to be able to go forward," he said.

"Yes, the Northern Policy Institute does a lot of that core research, and we would be building on all that information and good work that they’ve done. We just want to have a lens specifically for this region and that is probably too micro for them to be able to do."

Right now, the institute has funding for three years.

"There is a clear need for this sort of honest forum in the region's business landscape. We must make decisions based on sound research, conducted openly and without bias, and ensure that economic value is shared by all," said Makuch in a news release.

"This sort of data-driven decision-making is the key to long-term sustainability of our economy and the people engaged in its activities."