The long saga of arrested development in Northern Ontario 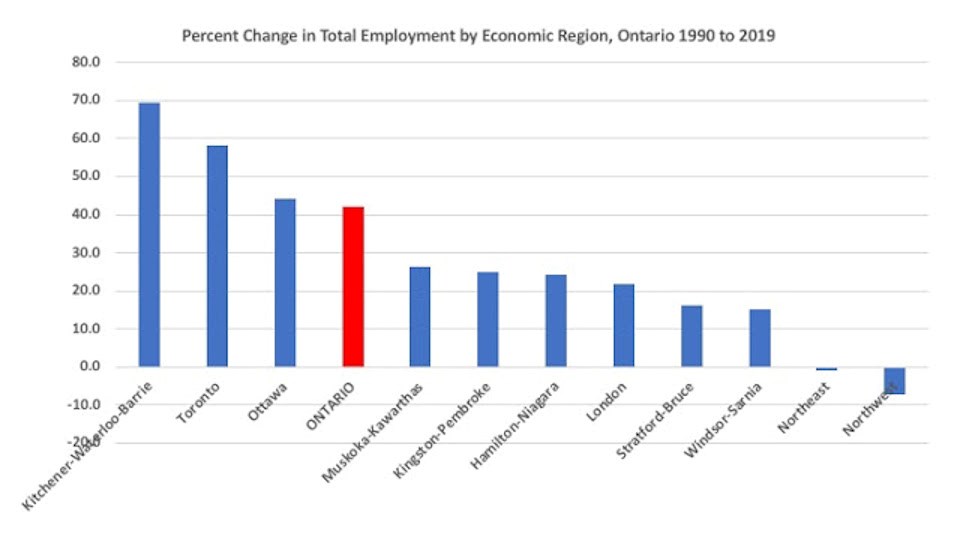 This column is reposted with permission of the author from his Northern Economist blog.

Ontario has suffered from slowing economic growth over the course of the 20th century but nowhere in the province has the problem been as severe as in Northern Ontario.

From 1990 to 2005, total employment in Ontario grew 23 per cent and real per capita GDP grew by 17 per cent. However, even omitting the pandemic year, going from 2005 to 2019, Ontario’s total employment grew only 15 per cent while real per capita GDP grew by eight per cent. There is a similar trend of slowing employment growth after 2005 on a regional basis but some regions – especially the North – have fared worse than others.

The most alarming picture comes from a glance at the overall employment growth picture from 1990 to 2019 (we need to omit 2020 because it is the pandemic year and makes things look even worse).

As the accompanying figure (above image) shows, from 1990 to 2019, total employment in Ontario grew by 42 per cent.

The fastest growing regions were Kitchener-Waterloo-Barrie, Toronto/GTA and Ottawa. This triangle region has indeed become the new core of the Ontario economy with the rest of the province increasingly being relegated to more peripheral status, with the peripheral nature worsening the farther out from this core. In Ontario, being out of sight of Toronto in the end also means being out of mind.

Indeed, the most distant regions from this core – Stratford-Bruce, Windsor-Sarnia and the North – have done the worse. But it is only the North that has seen long-term employment decline over the course of 30 years, with the northeast shrinking by one percent and the northwest by seven per cent.

Of course, the first response of most members of Northern Ontario’s mover and shaker elite will be to rear up on their hind legs, shake a finger at government and bemoan their failure to promote Northern economic development and argue we need a new program to address Northern needs.

The fact is, it is not that there has been insufficient attention by government. Indeed, the most significant growth industry of the last 30 years has been in government-funded studies, reports and programs designed to kickstart the Northern Ontario economy and help engineer a new golden age of growth.

Here is a quick list of major initiatives at both the federal and provincial level that show the last 50 years has seen a plethora of plans, programs and policies.

2018 to Present: Prosperity and Growth Strategy for Northern Ontario

1970: Creation of Northern Affairs Branch within Department of Mines

1977-85: Royal Commission on the Northern Environment

It is not that there have not been enough government attempts to save the North, it is that they have all been ultimately unsuccessful or at best a short-term holding action because they have not addressed the fundamental core economic problem of the region.

Both of these eras coincided with good global economic conditions, which fostered a demand for resource products and led to private capital investment flowing to production facilities and transportation networks. Both of these eras also saw a large spending and policy role for government particularly in infrastructure which facilitated resource development.

However, the institutional environment of a region dependent on external decision-making, both in terms of public and private sector decisions, resulted in an inability of the region to retain maximum benefits from resource development.

The fundamental problem is one of arrested economic development rooted in the long-term inability of the economy to diversify beyond the industries that powered its original takeoff because of the inability to substantially retain the economic linkages generated by those industries.

Successful development and diversification via linkage retention requires retaining a greater share of the income through local entrepreneurs and government institutional policies to allow for local decision-making in the development of the natural resource export base – the region’s comparative advantage.

Aside from wages to labour during the labour-intensive phases of development, the vast majority of the income flows from Northern development went to external owners of investment capital in the railway, mining and transportation sectors who also made the investment decisions. Absence of such flows reduces the opportunities that exercise and promote local entrepreneurial talent and development.

It is not that were no successful local entrepreneurs in forestry, mining and transportation. It is just that there were not that many and they did not persist.

The failure of persistence of local entrepreneurial magnates was partly a function of being able to make more money elsewhere and partly the result of government policy at the federal and provincial levels.

Government institutional decisions regarding taxation and natural resource policy were external as they were made at Queen’s Park or Ottawa.

Moreover, during the first 50 years of Northern development, the private income flows out of the region were complemented by the resource rents going to Queen's Park from forestry and mining – that on average provided about 20 per cent of provincial government revenues.

In Northern Ontario’s case, it was bereft of its own institutional capacity for promoting linkage retention by being part of Ontario rather than a separate province such as Saskatchewan or New Brunswick. Government decisions were made more to promote provincial or national development strategies rather than the long-term economic success of the region.

In the end, the North was useful in driving economic opportunities for Ontario and Canada but ultimately expendable.

All those plans and programs? They were not designed to actually really do anything that mattered. They were short-term political bones thrown to placate the locals and secure elections by providing evidence that government did indeed care.

And, in the short run, they did create a few temporary jobs and allow some people to make money before moving on, while all the while professing how much they loved the North.

Livio Di Matteo is an economist in Thunder Bay and conducts research in public policy, health economics and economic history. He is currently Professor of Economics at Lakehead University and writes extensively on these issues in his hometown, this region and the economy.