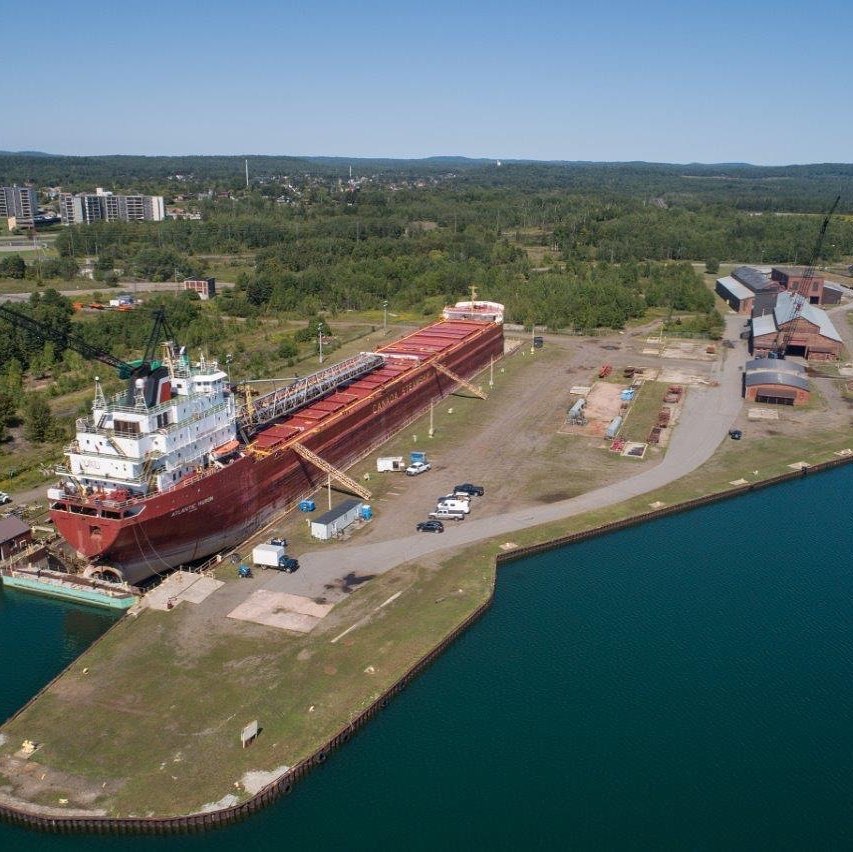 Thunder Bay will get an eventual piece of a major shipbuilding contract landed by Heddle Shipyards.

The Hamilton-based marine services company, with a large fabrication shop and dry dock on the northwestern Ontario's city waterfront, said the underutilized facility they acquired in 2016 still figures prominently in their near-future plans.

The work will create 50 jobs for the company.

But more importantly, Heddle has been awarded a contract to build a module for the navy's Joint Support Ship (JSS) program, while discussions continue on a second service agreement with Seaspan for a bigger package of work to come.

The $2.4-billion JSS program involves the construction of two vessels at Seaspan - including one currently being built - plus a third oceanographic science vessel as part of the federal order.

"We're actually thinking that Thunder Bay will probably take a prominent role in the modular fabrication portion of it," said Ted Kirkpatrick, Heddle's director of business and government relations.

Since Heddle acquired the former Lakehead Marine in 2016, activity in the 65,000-square-foot shop "is certainly is not as busy as we like it to be," said Kirkpatrick.

The Thunder Bay yard recently turned out the CSL freighter Atlantic Huron after three months of repairs, with some tugboat work scheduled for this winter.

Heddle would like to see more of that type of work, but Kirkpatrick explains it's been a tough slog to rebuild the business from a dormant shop that was basically gutted of equipment when they acquired the 42-acre facility.

Heddle is starting construction of the first module this month at their Hamilton yard headquarters, but intends to eventually start farming out more upcoming module work to its larger Port Weller and Thunder Bay yards. The smaller steel components are being fabricated in Newfoundland.

"I'm not going to tell you it's going to be tomorrow," said Kirkpatrick. "We're in the infancy of both of these things.

"But I'm confident we will get there. We will build modules in Thunder Bay and provide meaningful employment for, hopefully, a lot of skilled trade workers."

Unlike the old days of constructing ships from the keel up, vessels today are fabricated and put together in modules, resembling a huge LEGO set.

The module Heddle begins building this month will contain sections of the ship with all the equipment, piping and electrical systems installed.

The module will be moved out to the Vancouver assembly site in 15 truckable sections, lifted into a designated area, and clicked into place with an adjacent module. This cost-effective approach can spread the work out to multiple shops across Canada.

"It's plug and play," said Kirkpatrick.

But Heddle and Seaspan are really pinning their hopes on landing the "golden goose" of contracts for the Canadian Coast Guard's next Arctic icebreaker.

Ottawa launched its National Shipbuilding Strategy in 2010 to replace critical, and aging, government vessels like the Louis S. St. Laurent, a heavy icebreaker which will be entering its sixth decade of service in 2029.

The icebreaker replacement project was initially awarded to Seaspan in 2011 before it was taken away by the government, citing scheduling, technical and budget issues.

Seaspan is now making its second pitch to be awarded the CCGS John G. Diefenbaker contract. If successful, the work would be spread out to partners, like Heddle, and benefit different areas of the country.

Landing this contract would be huge for Heddle, said Kirkpatrick, because of the nature of the construction, stemming from the various duties performed by these multi-purpose ships.

"The Canadian Coast Guard vessels are surprisingly complex because they serve so many functions," including search and research, buoy tending, ship escort, and scientific expedition work. "The amount of equipment that gets packed into these ships is unbelievable," he said.

The modular fabrication work would be significant, especially for Thunder Bay.

As to what the government's plans are to begin a competitive bid process for the Diefenbaker remains the multi-million-dollar question, said Kirkpatrick.
Heddle recently responded to the Canadian government's request for information and await to hear of the next steps in the process.

There's been some concern in the Canadian shipbuilding community that Ottawa may open up the competition to international yards.

Heddle president Shaun Padulo has been critical in the past of Ottawa showing favouritism to a Quebec shipyard in its procurement process to supply icebreakers, but Kirkpatrick thinks this show of support involving an Ontario shipyard is a "step in right direction.

He thinks it builds a foundation to support further activity and hopefully allows them build ships themselves some day.

As for Thunder Bay: "There a few things in the work that, if they all come to fruition, will really be able to accelerate the growth of Thunder Bay. We have a plan and it seems like it's coming together, and this agreement with Seaspan will certainly light a fire under that."

On whether Thunder Bay, or any Ontario shipyard, could eventually see a return of Canadian commercial ship construction on the Great Lakes, Kirkpatrick said that's highly unlikely.

Fincantieri Bay Shipbuilding in Sturgeon Bay, Wisc., is building the first 'laker' in more than 35 years for the Interlake Steamship Company.

But Kirkpatrick said that's due to presence of the long-standing Jones Act, a law that protects the U.S. shipping industry in ship construction and in moving goods between U.S. ports. Canada has no such protectionist measures.

"Until we can compete with (Chinese yards), which is probably not going to happen, or there's some fundamental shift in the landscape of the way laws work, it's hard to see commercial shipbuilding activity getting back to the level of 30 years ago."