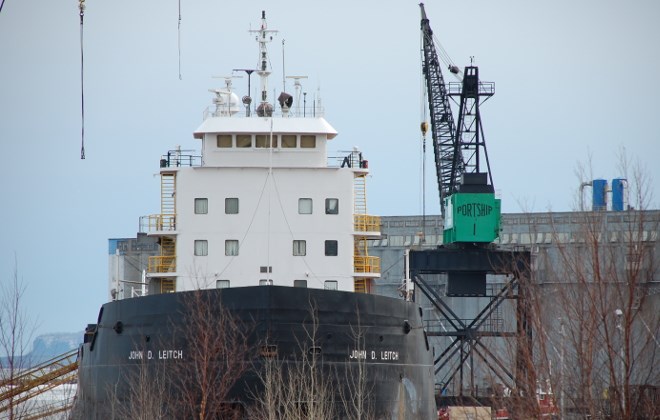 Heddle Marine, the owners of the former Lakehead Marine shipyard in Thunder Bay, looks to queue up project work from both sides of the border (2008 file photo).

It’s been a learning curve for the new owners of a Thunder Bay shipyard.

Over the winter, Heddle Marine Services handled its first ship, the CSL Tadoussac, which was the inaugural project for the southern Ontario ship repair company now operating the former Lakehead Marine and Industrial site.

Shaun Padulo, Heddle’s marketing and sales manager, said the vessel had been tied up for three or four years and Canada Steamship Lines (CSL) wanted to bring it back into service.

All indications coming from CSL is that they were pleased with their work and that the vessel is ready for the opening of the Seaway system, he said.

Padulo said Heddle is hoping to secure more work from CSL since their ships frequent the Lake Superior grain port. The Montreal shipper usually keeps a vessel or two in the harbour over the winter to get a first load out in the spring.

“We’re hoping they’re going to be one of our better customers up here.”

Headquartered in Hamilton, Heddle maintains yards in Atlantic Canada and runs the Port Weller Dry Docks on the Welland Canal, near St. Catharines.

The shipyard, located on Thunder Bay’s north end, plays a historic role in Canada’s shipbuilding history both on the Great Lakes and for the Royal Canadian Navy.

Comprised of 42 acres of property on the waterfront, the once-dormant facility includes a 748-foot-long dry dock and two large fabrication and machine shops that were gutted during an auction sale in 2014.

Heddle acquired the shipyard in June 2016 and has joint ventured with Fabmar Metals, a local ship repair, fabrication, and machining company. Heddle owns and administers the yard with Fabmar providing the workforce.

The steel fabrication work performed on the Tadoussac was essentially a pilot project for this business arrangement.

Padulo said Fabmar president Dale Ryynanen was stretched thin this past winter, working on other ships scattered around the harbour, forcing him to hire more people beyond his core workforce of 25.

“It was a positive first winter for us. We learned a ton and think Dale and the Fabmar crew really need to be commended for bringing that yard back to life.”

But Padulo said they’ll need additional management to support the Thunder Bay operation if they intend to take on multiple projects.

“There were challenges. We have to find someone who can support Dale, with boots on the ground when we’ve got a big project.”

Padulo said their main goal is to keep the shipyard busy year-round. He plans on getting out on the road to promote the facility.

“We’re really excited about Thunder Bay. At the time, we thought we may be able to do a small number of vessels each year and Dale would have his traditional forestry and mining work that would keep everything running smoothly throughout the course of the year.

“But based on indications we’re getting from the operators, we’re hoping to do more vessels than we actually assumed. If you look at the Thunder Bay shipyard historically, from talking to local guys, when they describe the number of vessels done over course of the years, there were pretty significant numbers.”

They’re looking at potential fabrication projects that could be done in Thunder Bay for clients located on the lower lakes and the East Coast, and there could be a potential marine-related project for the yard this summer. There’s also interest for dockings next winter but nothing has been signed yet.

With the exchange rate on the Canadian dollar, Heddle wants to drum up U.S. business but it remains a sticky situation to have American vessels repaired in Canadian shipyards due to restrictions under the protectionist Jones Act.

Under the act, only 7.5 per cent of the steel on an American ship can be replaced in a foreign yard over the lifespan of the ship.

Padulo said they’re exercising caution so as not to put any U.S. client at risk to be in violation of the act.

Almost as a trial project last summer, Heddle performed some work on an American vessel, the Presque Isle, at Port Weller and came away encouraged with the range of work they can potentially perform.

“We can do anything so long as we don’t go beyond that seven-and-half steel mark.”

Padulo said they still intend to follow through on plans made last year to restock the Shipyard Road shops with new equipment and expect Fabmar move onto the property sometime this year.

“We haven't done any of the refurbs yet. We’ve got a plan together and we know what want to do. There’s a fairly significant capital expenditure involved in all those items. Our CFO is building our capital expenditure plans for all the (Heddle) locations.”

Tbaytel expands fibre service in Kenora
Nov 24, 2020 11:01 AM
Comments
We welcome your feedback and encourage you to share your thoughts. We ask that you be respectful of others and their points of view, refrain from personal attacks and stay on topic. To learn about our commenting policies and how we moderate, please read our Community Guidelines.