The four-laning of Highway 11/17 between Thunder Bay and Nipigon will include the construction of Ontario's first cable suspension bridge.
0
Jan 23, 2012 4:08 PM By: Ian Ross 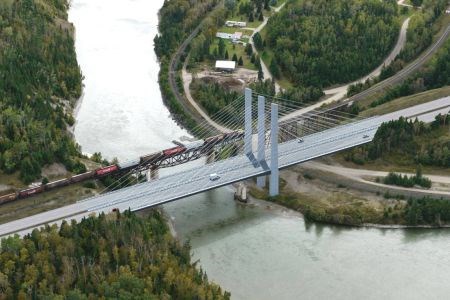 Ontario's first cable suspension bridge will be over the Nipigon River.

The four-laning of Highway 11/17 between Thunder Bay and Nipigon will include the construction of Ontario's first cable suspension bridge.

The project, now in the design stage, is part of the 100-kilometre-long twinning of the vital North Shore highway.

In proposing a new bridge spanning the Nipigon River, some environmental concerns about preserving fish habitat were taken into consideration.

“This is a unique location,” said Doug Cooper, the Ministry of Transportation's (MTO) head of planning and design in Thunder Bay. “There are a lot of technical and engineering constraints (due to) the environmental sensitivities. The Nipigon River is a world-renowned brook trout area and there is a spawning area where this bridge is.

“Our environmental requirements forced us to stay close to the existing bridge and within our existing right of the way, and stay out of the water. That's forced us to require a larger span than we would typically need because we can't put any piers in the water.”

The design work is being handled by McCormack Rankin Corp., which is part of the Marshall Macklin Monaghan (MMM) Group. The detailed designs will be done at the end of 2012 with tendering soon after.

Another unique feature will be that the pedestrian crossing will be slung under the bridge deck.

The Highway 11/17 four-laning work is part of the Ontario government's $618-million budget for the Northern Highways Program.

Cooper said only half of the 11/17 projects are currently funded for either construction or design work.

“We still have to wait for a commitment to build the rest of it.”

Although the entire series of projects, which began in 2010, are expected to take 10 years, Cooper said if funding continues to arrive at the current rate, it could be wrapped up within the next eight years.

The four-laning is largely a twinning of the existing highway, but some sections will be on totally new alignment.

The first phase is a six-kilometre stretch just east of Thunder Bay at Hodder Avenue where a new interchange is being built. That part of the highway sees more than 7,000 vehicles per day.

Included in the $42-million project is a partial cloverleaf, also known as a par-clo, that engineers decided would best fit the terrain because of the grades and the visibility in separating Hodder Avenue traffic by routing it overtop of the highway.

“The other option was signals and we didn't want to put signals on a four-lane, divided highway,” said Cooper.

TerraNorth Construction and Engineering of Sudbury was awarded the contract and began work in the summer of 2010.

Buoyed by warm fall weather, Gary Weiss, the MTO's area contract engineer, said the Sudbury road builders are ahead of schedule and could have the project wrapped up a year early, by the fall of this year.

“They've just been very organized,” said Weiss. “They really put together a good team and put a lot of resources toward this. and things have been moving quite quickly for them.”

“And fairly aggressive,” adds Cooper, with about two-thirds of the project now complete.

With the project now in winter shutdown, Weiss said paving remains to be done in the eastbound lanes, and the Hodder Avenue overpass superstructure needs to be built.

A new entrance was also installed at the Terry Fox Scenic Lookout and the eastbound bridge over the Current River was widened.

A second contract underway went to Bot Construction of Oakville, which involved four-lane work on a new 14-kilometre alignment between MacKenzie Station Road and Birch Beach Road. It includes installing new bridges over the MacKenzie River. The completion deadline for the $62-million contract is September 2014.

Weiss said the bridges are in, but are not yet open to traffic.

The existing highway will be relegated to a service road to provide access for local residents.

So far, Cooper said there haven't been any unexpected challenges associated with this typical Northern Ontario highway project beyond blasting a fair amount of rock.

The Nipigion bridge and its approaches are part of four projects now in the design stage, including a 13-kilometre stretch between Highway 527 and Mackenzie Station Road, a 12-kilometre piece from Red Rock Road No.9 to Stillwater Creek Bridge, and an eight-kilometre section between Birch Beach Road and Highway 587.

As far as any talk of four-laning Highway 17 east of Nipigon, along the rocky and hilly shores of Lake Superior, Cooper said those discussions are way off in the future.

The cost to widen through that area would be quite large, and traffic volumes tend to drop off east of the Highway 11/17 junction.

Cooper estimates that east of Nipigon, Highway 17 doesn't receive more than 1,500 or 1,600 vehicles per day.