The Wasaya Group is bulking up to be a ready service supplier to the Ring of Fire. This fall, the Thunder Bay-based Native venture corporation announced joint ventures with a major Northern contractor and a Sioux Lookout trucking company.
0
Nov 28, 2011 4:41 PM By: Ian Ross 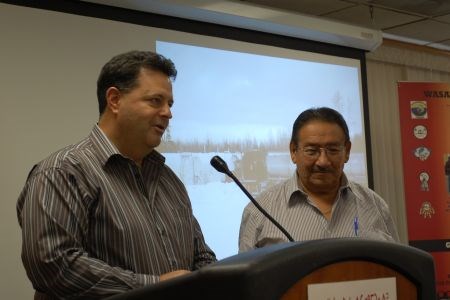 The Wasaya Group is bulking up to be a ready service supplier to the Ring of Fire.

Dowland business development director Martin Landry said the company has delivered more than $1 billion in mine and power line developments as well as hospital and school projects in Canada and Alaska since its inception 30 years ago.

The new venture, Wasaya Dowland Contracting, will provide construction expertise to Wasaya with future training and apprenticeship programs stemming from the relationship.

“Wasaya Dowland Contracting will undertake large construction initiatives through the industrial, commercial and institutional sectors,” said Landry. “The company will be available to serve the Ring of Fire should they require our industrial capacity.”

Wasaya president and CEO Tom Kamenawatamin said the long-standing vision behind the corporation was to create an economic base for Far North youth and communities because “the government would not always be dependable.”

With 12 businesses – including Wasaya Airways -- and two not-for-profits in the fold, he expects to announce more private sector partnerships soon.

“This is only a beginning; there are a lot of opportunities in the future.”

Kamenawatamin said the trucking venture with Morgan, to be known as Ohteban LP, is a pre-emptive move for the coming of permanent access roads into the remote communities. “This is coming on very, very fast.”

Morgan Transfer owners Darrell and Anne Morgan have worked with Wasaya for four years, hauling fuel shipments into the communities. Freight and training opportunities are expected to grow.

“There is going to be a lot of work in the region for trucking,” said Kamenawatamin.

“Tom's and Wasaya's goal is to take it to the next level and get into other trucking ventures,” said Darrell Morgan. “We always joked when the trucking guys had a good season up north, Wasaya Airways suffered. Now we've got the two goals together and we're all on the same page and going down the same road.”

“We're finally starting to take back the responsibilities that were taken away from us during colonization.”

Beardy remembered that as far back as 1973, none of the communities had band offices and all administrative programs were run by Indian agents. In the mid-1960s, only a handful of Aboriginal students attended Lakehead University in Thunder Bay, compard to 1,100 today.

“If we're going to encourage our young people to get educated, we have to do the foundational work,” said Beardy. “This sends a message to government and the private sector that we are capable of doing business...and they are opportunities for all of us.”

The Wasaya Group has has gotten bigger with the arrival of Fort Severn First Nation into the fold as the 11th community shareholder and co-owner of Wasaya Airways LP.