Nelson Architecture’s inspired use of wood in the construction of an elementary school addition was rewarded with a design award at the 15th annual WoodWorks event in Toronto, Nov. 12.
0
Nov 16, 2015 2:53 PM By: Northern Ontario Business Staff 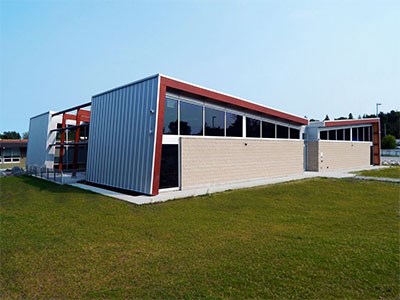 Nelson Architecture’s inspired use of wood in the construction of an elementary school addition was rewarded with a design award at the 15th annual WoodWorks event in Toronto, Nov. 12.

Judges were drawn to the use of glulam in the 10,000-square-foot addition, which was grafted onto the existing school, built in 1970. Glulam was incorporated as the structural system with a low-slope wood deck for the Kenora Catholic District School Board project. The use of exposed wood was intended to form a connection with the children inside to the outside world.

Lavergne Draward and Associates were the engineers.

It’s not the first time the Ontario arm of the Canadian Wood Council have honoured David Nelson and his staff.

In 2011, the firm received a provincial wood advocate award for a portfolio of projects including the new Lake of the Woods Discovery Centre, the St. Thomas Aquinas high school, and the Northern Ontario Sport Fishing Centre in Sioux Narrows.

Twelve awards were handed out during the event, with nine going to specific wood projects and three handed out to professionals for their contributions to the design-build community as wood design experts and advocates.

“All of these buildings were thoughtfully created with people in mind. It doesn’t matter if we’re talking about a large commercial building or a small residential addition, a performance hall or a bar,” said

“Wood use is definitely on the rise, and not just because new code changes adopted earlier this year permit its use in a wider range of buildings,” said Berube.