Architect and green building expert returns to his roots in Sudbury

Jason McLennan spoke to students about how to create a regenerative master plan for Sudbury at the McEwen School of Architecture
Nov 7, 2019 8:00 AM By: Colleen Romaniuk 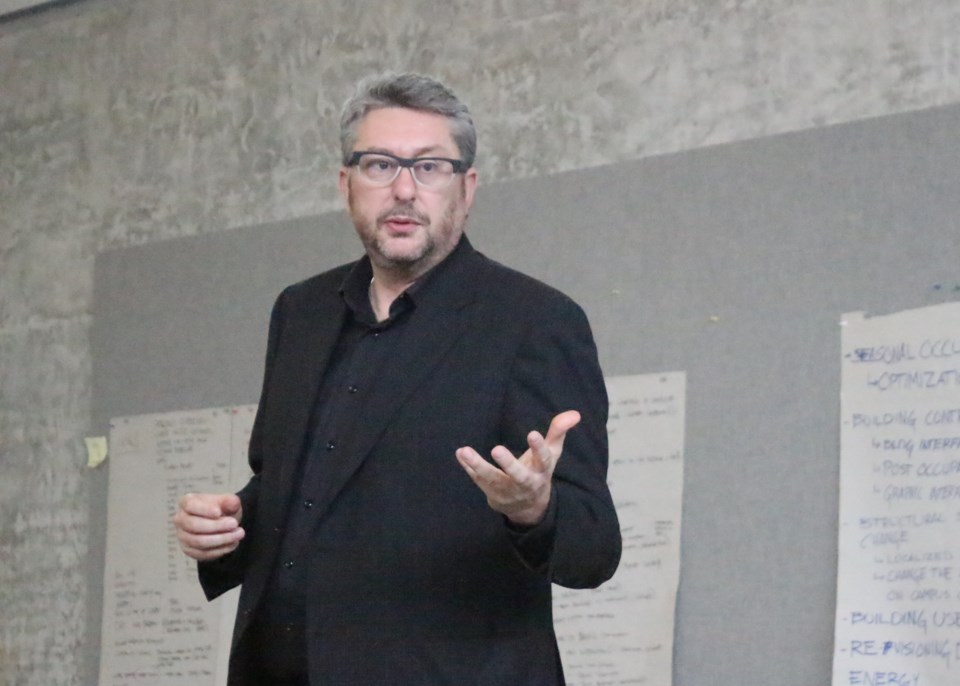 Jason McLennan is the CEO of McLennan Architecture and the founder and chair of the International Living Future Institute as well as the creator of the Living Building Challenge. (Colleen Romaniuk photo)

World-renowned architect and expert on sustainable buildings Jason McLennan returned to his roots in Sudbury to share his knowledge with students at the McEwen School of Architecture.

From Nov. 5 to 6, McLennan was a guest in Laurentian University's Architecture Series, led two workshops, and participated in a roundtable discussion with students.

He has played a foundational role in the green building movement around the globe by creating the Living Building Challenge (LBC).

The LBC is an international sustainable building certification program, design philosophy and advocacy tool developed in 2006.

By promoting the most advanced measures of sustainability in the built environment, the LBC has changed the way we think about architecture.

Growing up, McLennan said, he was always a troublemaker with an interest in pushing where he was told he could not go. Sudbury's regreening efforts in the 1980s had a profound effect on him, and sparked an early interest in regenerative, restorative architecture.

After studying at the University of Oregon, and later at the Glasgow School of Architecture, McLennan said he was fortunate enough to find mentors in some early proponents of the green building movement.

But he soon realized that what they were doing wasn't enough.

“We were basically showing one thing at a time that it was possible to build in a truly regenerative way, but nobody was bringing it all together in a holistic way on an individual project,” he said.

In other words, he felt as though we were trying to rearrange the deck chairs on a sinking Titanic.

In 2005, he started working on “a little troublemaking manifesto” called the Living Building Challenge.

The purpose of the LBC is to build with the intention to create conditions conducive for life. The certification program is holistic in the sense that it considers multiple factors simultaneously.

Not only do McLennan's living buildings concern themselves with net positive water and energy, but they also aim to have a positive social impact on the surrounding environment.

When he first developed the idea for the LBC, he was faced with many challenges. Early critics maintained that his ideas for radical sustainability were too expensive and too difficult to accomplish.

Oftentimes, McLennan and his team had to work with municipalities to change or create new laws and regulations for building to take place.

As of 2019, there are 598 LBC projects in 29 different countries, and each building follows strict guidelines.

For example, designers must first consider the location of a site and the impacts the construction will have on the surrounding environment and society before being built and during its operation.

Living buildings harvest their own water, produce 105 per cent of their own energy, integrate nature into their design, monitor air quality and eliminate the use of construction materials that have adverse effects.

After getting a few big companies on board with his new regulations (like Google), more fabricators and manufacturers became willing to comply.

Examples of certified buildings include the Bullitt Center in Seattle, the UniverCity Childcare Centre in Burnaby, and the Nature Lab at Phipps in Pittsburgh.

At one of the workshops held at the McEwen School of Architecture on Nov. 6, McLennan explored how to create a regenerative master plan for Sudbury with the students.

He currently sits on the McEwan School of Architecture Advisory Board along with director David Fortin and comedian, author and podcaster Ryan McMahon.

At the heart of his design philosophy is a message of empathy.

“In the end, what matters more than anything is that we understand how to love each other and the beautiful planet we've been given.”

Sudbury moving forward on $1.5M experiment on road repair
Jul 10, 2020 4:25 PM
Comments
We welcome your feedback and encourage you to share your thoughts. We ask that you be respectful of others and their points of view, refrain from personal attacks and stay on topic. To learn about our commenting policies and how we moderate, please read our Community Guidelines.