The ongoing four-laning of Highway 69 between Sudbury and Parry Sound will save lives, move freight faster and if any road in Canada needs it, says Manitoulin Transport president Gord Smith, 69 is it.
Jul 13, 2008 11:17 PM By: Ian Ross 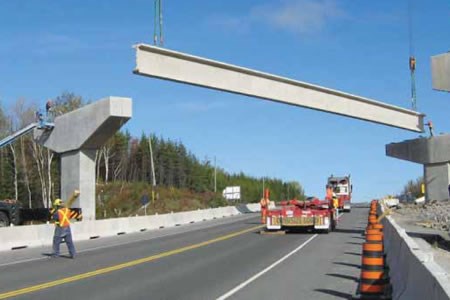 At $2 billion, blasting out and straightening Highway 69 is no easy construction job.

The ongoing four-laning of Highway 69 between Sudbury and Parry Sound will save lives, move freight faster and if any road in Canada needs it, says Manitoulin Transport president Gord Smith, 69 is it.

"That's one of the worst highways in Canada particularly during the tourism season.

"As much as the general public will harass the trucking industry, you wouldn't believe the amount of characters on that highway," says Smith in a phone interview from the company's Cambridge, Ont. terminal.

"You'd be trucking downhill on a pretty good grade with 80,000 pounds of steel and some guy at the bottom pulls out with his 35-foot camper behind his half-truck. Trucks and tourist traffic don't mix."

Frequent road closures from accidents and bad weather sometimes mean drivers must park their rigs if they surpass the service hours they can log daily.

For just-in-time freight, carriers must send a relief driver to take the shipment to the next terminal.

"Often it's easier said than done," says Smith. "When you're operating an LTL (less-than-load) service, being a day late doesn't do customers much good.

Slowly over the years, the Highway 400, freeway link has moved steadily north as part of the Liberals $2 billion strategy to re-build Northern highways.

The decision to widen, and in some places entirely re-align, Highway 69 was promised by the Bob Rae government in the early 1990s before construction was kiboshed by Mike Harris in 1995.

But a series of fatal crashes, particularly near a sharp S-curve close to the northbound turnoff to Killarney Provincial Park, sparked a bumper-sticker campaign by a citizen's group and Sudbury MPP Rick Bartolucci urging for the project to resume.

Prior to the start of construction in 2004, the daily traffic count between Parry Sound and Sudbury was a vast range between 5,000 and 14,000 vehicles. Those numbers swelled to 19,000 during the summer with about 13 per cent of that being commercial traffic.

Like bookends, construction began at both the north (Sudbury) and south (Parry Sound) ends of the 152-kilometre stretch. The entire project, which will be known as Highway 400, is expected to be complete by 2017.

This fall, a new seven-km section between Parry Sound and Nobel opens followed by a six-km new route late new year between Sudbury and Highway 537.

In Sudbury's south end, a dangerous intersection on the Southwest Bypass connecting to Highway 17 is getting a complete $25 million makeover.

Re-construction at the Long Lake Road corner will bring new traffic signals, a pedestrian underpass and most visually, a four-lane welcome mat into the city.

Greater Sudbury economic development officer Paul Reid, says the phased opening of those new sections will be a "huge lift to us."

Sudbury sits at the hub of three major highways and is a regional service hub for trucking and logistics companies.

Reid says the new highway isn't yet a huge drawing card for outside companies considering expansion to Sudbury.

The attraction is more the red hot mining and supply activity.

Still, he expects four-laning will have a huge impact on Sudbury's economy within a decade.

"It'll help companies here compete in the Greater Toronto market when it's done with the quicker turn-around."

While the companies may not be jumping on the highway bandwagon, it will be a road to tranquility for cottage-seekers.

Chandler specializes in waterfront and island properties on northern Georgian Bay, from Killarney to McGregor Bay.

"How to attribute the amount of effect the four-laning has on it is hard to say. It has some."

But there's no doubt as the new corridor opens up, the summer rush to the cottage will be safer and more pleasant.
About 60 per cent of his Internet queries are within a day's drive, mostly the Golden Horseshoe area. Others are Americans willing to drive 12 hours from the northern U.S. and there's even been a handful of European sales.

"We don't need a huge percentage of those people to have an impact on the market up here."

Some are bailing out of the crowded and pricey Muskoka and central Ontario market in searching for some privacy, solitude and cheaper cottage properties starting at $150,000.

To the west, North Bay mayor Vic Fedeli attributes many exciting developments in his city over the last three years -- a robust housing market and expansions to local manufacturing -- to a combination of factors including the four-laning of Highway 11.

Fedeli says it's hard to directly pin down any economic impacts because of the improved highway, but it's definitely mentioned in the city's marketing literature.

With only 40 kilometres left to widen between South River and Burk's Falls by 2012, Fedeli encourages inquiring company executives to drive up from southern Ontario to see for themselves how little time it takes.

"Once they do and they've gotten here in less than three hours, it blows away any myth of being so far north."

Fedeli, who often heads south to Toronto on city business, can leisurely make it down for a lunch meeting and be back in the office by late afternoon.

But he adds Ottawa and Queen's Park must go farther with development initiatives such as more flexible loan programs and tax incentive zones similar to those he's toured in Singapore and downtown Detroit.

"With bordering provinces like Quebec, Manitoba and every (U.S.) state offering so many incentives...municipalities in Northern Ontario just can't put the same kind of package together. We need federal and provincial partners at the table."