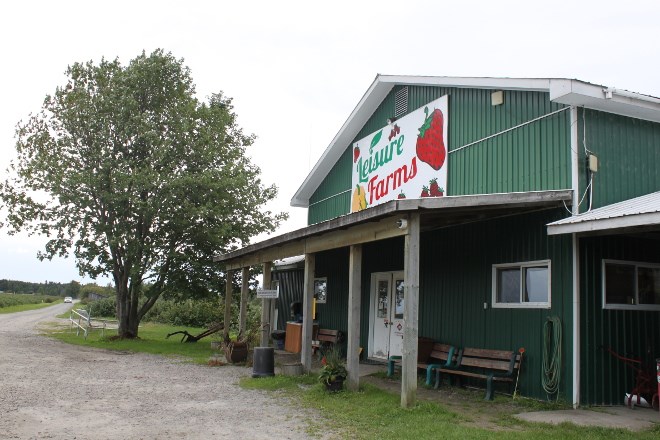 Leisure Farms in Sturgeon Falls plans to open for the pick-your-own season within weeks. (File photo).

Mitch Deschatelets had to jump down to the ground to reduce the noise from his tractor when speaking with BayToday to be sure the word got out loud and clear.

"We plan on opening the last few days of June or the beginning of July for the pick-your-own season," shouted the Leisure Farms manager.

The self-proclaimed "greatest strawberry and raspberry farm in Ontario," Leisure Farms in Sturgeon Falls, about an hour east of Sudbury, will see some changes to operations in light of the physical distancing required by COVID-19.

At the beginning of the season, Deschatelets said, pickers will not hitch rides out to the fields by tractors. With 500 to 1,000 daily customers on the grounds, he said they would run out of available wagons quickly with physical distancing in place. So, visitors should wear proper footwear and expect to walk out to the field.

Another departure from the norm at Leisure Farms this summer will be no product weighing by staff prior to payment. To eliminate unnecessary handling of goods, two sizes of flat-rate containers will be available for berries.

Deschatelets said Leisure Farms will do everything in its power to keep its customers and staff safe, but added he can think of few safer places to get out and enjoy a day with the family.

"As far as distancing, we've got 600 acres so I think we can do a pretty good job of keeping people apart," he said.

For nearly four decades, the farm has been growing and selling a variety of fruits and vegetables, building its reputation as the province's largest pick-your-own strawberry farm.

Deschatelets is the third-generation farmer in his family to run the operation, which began with his paternal grandparents, who started out with corn and dairy cows.

His parents, Mike and Diane, purchased the farm in 1981, and began expanding its offerings, cultivating the first strawberry plants and slowly adding new crops.

Deschatelets admited to having some doubts back in March at the onset of the pandemic about whether the public picking season would happen.

"If no one could come, it would have been a disaster," to the entire operation, he shared. "We can only pick so much for direct retail. A big percentage depends on our pick-your-own season."

Now, with restrictions loosening, Leisure Farms is on track to open at its typical time in early summer with strawberries and haskaps, and a hopeful Deschatelets believes this could be one of Leisure Farms most successful years ever.

"If you're looking to do something without putting yourself at risk, I think picking berries would be at the top of the list as far as activity," said Deschatelets with a chuckle.

"I look forward to seeing our customers out here and we'll do social distancing together."