North Bay meat processor to be operational this March 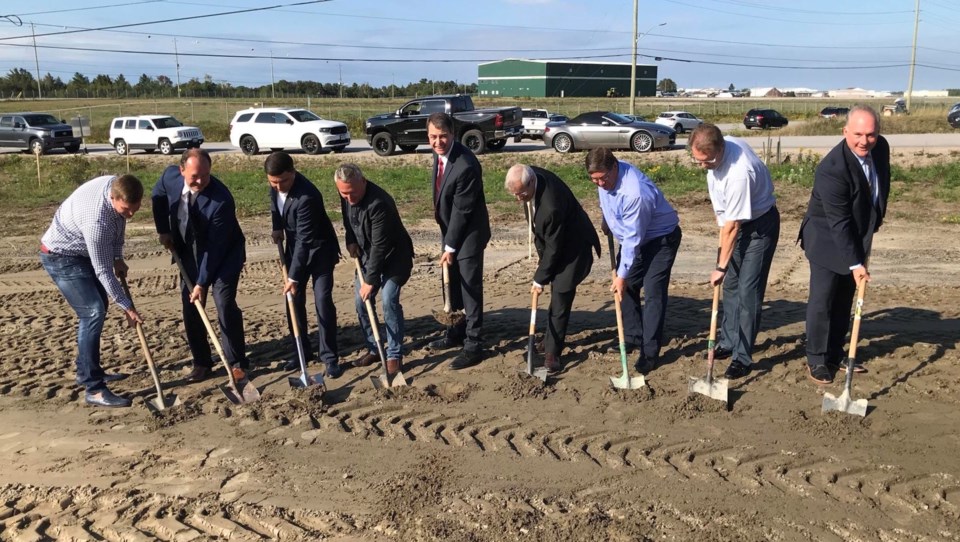 Construction broke ground on Canada Meat Group's 16,000-square-foot meat-processing facility in North Bay in 2018. The plant is expected to be operational by March of this year. (Photo courtesy Bob Coles/CKAT)

When Canada Meat Group’s new North Bay facility gets up and running this March, it will be processing beef sides and quarters sourced from slaughterhouses in the Toronto area.

But, eventually, the company wants to work with Northern Ontario farmers to process, sell and export beef grown right in the North.

“It’s not so cheap, it’s not so easy for regulations, but it’s our goal.”

Once complete, the federally licensed operation will comprise a processing plant and cold storage facility, which will specialize in producing halal and kosher meat products for export to markets in Asia and Europe.

The company operates a similar meat-processing plant, an abattoir, and a cattle operation in Kiev, Ukraine. After making known its intention to expand globally, was wooed to North Bay by the city’s economic development department.

To set up shop in Canada, the company received a $1-million repayable loan from the federal government and an additional $1.4 million from the province last July.

Zahrebelnyi, who comes from a farming family in Ukraine, declined to say how far out the company’s plan is to construct a local abattoir, or where in the North it might be located.

But he spoke of Canada Meat’s desire to establish relationships with local farmers, signing one or multi-year agreements with them to supply cattle for the operation.

“It’s cooperating with local farmers and how many cattle they can grow special for us,” he said.

Zahrebelnyi estimated the cold storage facility will be able to process 450 tonnes a month, or 5,000 tonnes a year, with opportunities for expansion down the road.

“When we have more possibilities to sell, it can be double in size,” he said. “It’s not huge, like a majority that produces, but it’s not so small.”

While some of the meat processed will go to local grocery stores and butcher shops, about 80 to 85 per cent of the product will be destined for the export market, Zahrebelnyi said.

In addition to a fresh-meat refrigerator, the facility will have an on-site blast freezer, which maintains a temperature of -37 Celsius.

This will allow meat to be vacuum-sealed and stored for more than two months, while preserving freshness, until it’s ready to be shipped, Zahrebelnyi added.

As construction nears completion, the company has been working to staff up the facility.

When fully operational, the North Bay plant is expected to employ up to 40 people, including 24 meatcutters.

Zahrebelnyi said it’s been difficult finding trained people locally to take on that work, and so Canada Meat plans to bring over eight to 10 meatcutters from Ukraine to work at the facility.

To fill remaining demand, the company is partnering with Canadore College to develop and offer a meatcutter-training program.

It will comprise both in-class learning and hands-on training at the Canada Meat plant, and anyone interested in learning the trade will be welcome to enroll, Zahrebelnyi said.

“(The training program) will be not only for our facility,” he said, “it will be for any facility (across Canada).”

Zahrebelnyi said the facility has all the required certifications to operate, according to standards under the Canada Food Inspection Agency, the Global Food Safety Initiatives, and Hazard Analysis and Critical Control Point, as well as ISO: 22000, which relates to food safety management.

Collège Boréal to become hub for research projects and initiatives
Mar 24, 2020 8:00 AM
Comments
We welcome your feedback and encourage you to share your thoughts on this story. We ask that you be respectful of others and their points of view, refrain from personal attacks and stay on topic. To learn about our commenting policies and how we moderate, please read our Community Guidelines.