In 2014, just two years after Sagamok Anishnawbek First Nation acquired Ritchie Falls Resort, a fire ripped through the showerhouse, damaging the boiler and other infrastructure.
Mar 4, 2016 7:58 PM By: Lindsay Kelly 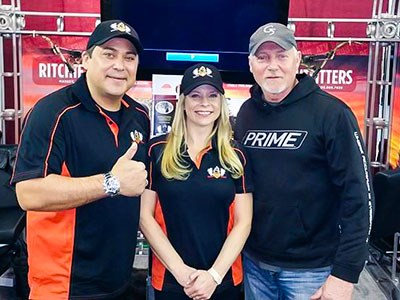 Matthew Owl (left) and Kyla Owl, pictured with Ray Colvin of Racks and Tracks TV, are currently on a tour of the U.S. to promote Ritchie Falls Resort. The main lodge has served as a dining and relaxing area for visitors. Three new cabins and a conference centre are being added this year.

In 2014, just two years after Sagamok Anishnawbek First Nation acquired Ritchie Falls Resort, a fire ripped through the showerhouse, damaging the boiler and other infrastructure. But rather than seeing it as a disadvantage, the community embraced it as an opportunity.

“I think it was a good thing, really, because it kickstarted the work we’ve identified that we need to move forward on with that particular business,” said Alan Ozawanimke, CEO of Sagamok Anishnawbek and the Sagamok Development Corporation.

The community, located along the north shore of Lake Huron, is now embarking on a multi-stage renovation of the hunting and fishing lodge, which will include upgraded hydro and an increased capacity.

The off-grid, hydroelectric power system is currently being upgraded by Patrick Mechanical of Sudbury. The generators and turbine are being manufactured and sent from overseas, and the project should be complete this spring, Ozawanimke said.

Work will then begin on phase two of the project, which involves the construction of three cabins and a conference centre. The new infrastructure will increase the lodge’s capacity from 60 to at least 80.

“It’s a middle ground, I think, for those who still want to have not necessarily an overly rustic type of environment, which a lot do continue to seek, but those who want something a little more modern, too,” Ozawanimke said.

Ritchie Falls’ managers, Matthew and Kyla Owl, are currently on a marketing tour of the U.S., promoting the lodge to its target “consumptive” market — those who travel north for the bear, wolf and moose hunting, along with the area’s excellent fishing.

Ozawanimke said the lodge has received high praise in recent years for its facilities and activities.

After a visit last summer, an Ontario ATV club ranked the lodge as the number two spot in Ontario for ATV enthusiasts, and the TV series Canadian Hunter filmed a segment on the local bear hunt last year. Ozawanimke said they’ve expressed interest in returning to film supplementary segments.

All of this helps raise the lodge’s profile, and Ozawanimke said the community is planning a rebranding campaign for this year.

“I think the timing is right to consider renaming and rebranding to expand, not just as a hunting and fishing destination, or ATV destination, but an area where you can go to have business sessions with alternative activities associated with that,” he said.

The lodge has already received interest from a B.C. firm looking to hold training sessions there, while an Ontario-based ecological group has initiated discussions about using the lodge as a headquarters for their training programs.

This activity is taking place alongside the development of an industrial park and the expansion of the community’s ISO designation.

Ozawanimke said that, in contrast to many of the small neighbouring towns, Sagamok is thriving as it expands on these and other projects.

“Sagamok is growing, and more people are working and lending to that local economy,” he said. “We’re not in isolation in Sagamok; we’re becoming active contributors to the local economy in a lot of ways.”