Opened this spring, the Manitoulin Hotel and Conference Centre is the first hotel to be built on Manitoulin Island in a century.
Jul 10, 2013 6:02 PM By: Lindsay Kelly 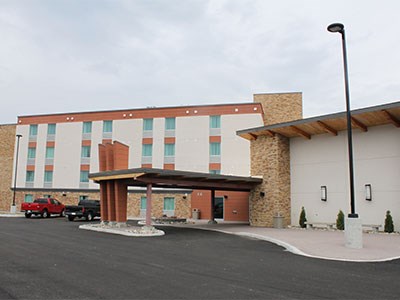 Completed just this spring, the $13.5-million Manitoulin Hotel and Conference Centre in Little Current on Manitoulin Island boasts 59 rooms, a 350-person conference centre, business suites, a restaurant and a pool.

Opened this spring, the Manitoulin Hotel and Conference Centre is the first hotel to be built on Manitoulin Island in a century.

But more than just a cozy place to stay, its arrival is poised to bring big changes to the area’s burgeoning tourism industry.

Its location in Little Current, on the North Channel of Lake Huron, is ideal for visitors accessing the Island via Highway 6.

In development for the last six years, half of the cost of development was shared between the member communities and GSCT, with additional funding coming from Aboriginal Business Canada, Aboriginal Affairs and Northern Development Canada, and the Northern Ontario Heritage Fund Corp., which provided $250,000 towards a geothermal system.

By serving new markets, it’s also supporting GSCT’s mandate to expand the tourism industry as a whole on Manitoulin.

“With the types of markets that we’re attracting – basically groups and First Nation meetings or meetings in general – we can’t accommodate everybody, and that ties in with our model,” Eshkawkogan said.

That means the motels, bed and breakfasts, cabins and lodges in the area will benefit from the overflow business, and it enhances the potential for visitors to lengthen their stay, taking in more of the attractions the Island has to offer, Eshkawkogan added.

Through its travel promotion work, GSCT has already started marketing two- and three-day packages to tour operators that bundle local activities offered by local businesses with a hotel stay.

“Right now, they’re simply going up or down Highway 6, going through the Island, catching the ferry, or vice versa, and heading to the Sault or Sudbury,” Eshkawkogan said. “This changes their itinerary, gives them another option for things to do in the North, and it keeps the money moving around here a little longer.”

An example package offers a night at the hotel, followed by a horseback ride with Honora Bay Riding Stable, one night of teepee camping with an Aboriginal feast and storytelling from Spirit Island Adventures, and a final hotel stay.

“That’s really the route we need to go on the Island,” Eshkawkogan said. “We need to start working together a little bit better to package this stuff instead of doing one-offs and worrying about ourselves as a business. We need to work together to make sure that people are enjoying their stay on Manitoulin as a whole.”

Subtle nods to the First Nations culture are incorporated throughout the hotel’s décor and design, from the pillars representing the Seven Grandfather Teachings – an approach to the way to live life – to the names of the rooms – Ojibwe, Odawa and Potawatomi.

Natural materials like stone and timber used in the hotel’s construction were taken from the communities that invested in the hotel. The idea, Eshkawkogan said, was to make the hotel blend into its surroundings as much as possible and make it seem like a natural fit.

Roughly 70 to 80 per cent of hotel employees are of First Nations descent, but Eshkawkogan said employment is offered to the best people for the job, regardless of ancestry. Training is provided through the GSCT’s partnership with the Ontario Tourism Education Corp.

Choosing to brand the hotel through an independent banner instead of a well-known player in the industry was an easy decision, Eshkawkogan said. Roughly 80 per cent of hotels with 100 or fewer rooms market themselves independently; brand-name hotels tend to push their high-profile areas, and smaller communities can be overlooked.

“If we can keep some of that money here, versus paying a brand that takes it out to the big cities like Toronto, why not keep it in our local economy?” he said.

So far, the strategy seems to be working— the hotel has 70 per cent occupancy booked for the summer. In the first months of its life, the hotel has already hosted a tourism conference, an Ontario Trillium Foundation workshop and a wedding.