A First Nation caterer has struck gold after teaming up with an international food and beverage provider.
0
Mar 10, 2014 6:39 PM By: Ian Ross 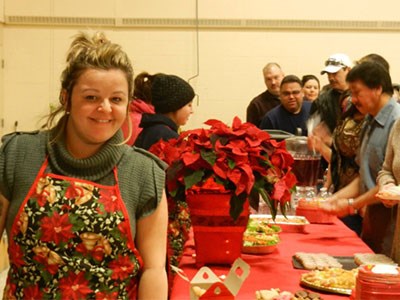 First Nation entrepreneur Tina Gagnon is growing out her catering business with a partnership agreement with Aramark Remote Workplace Services and a new service contract with AuRico Gold.

A First Nation caterer has struck gold after teaming up with an international food and beverage provider.

Tina Gagnon, owner of CreeQuest, a catering and event planning company, has landed a contract to handle catering for the workforce at AuRico Gold’s Young-Davidson Mine in northeastern Ontario. This success for Gagnon comes as a result of signing a partnership agreement last November with Aramark Remote Workplace Services, a division of one of North America’s largest outsourced food and beverage company.

The AuRico contract, which started Jan. 24, is for six months with an option for renewal. Landing this camp gig means hiring two support staff and at least four full-timers as line cooks, housekeepers and janitorial staff at the mine site.

“To me, this is just the beginning,” said Gagnon, a resident of the Taykwa Tagamou First Nation near Cochrane, who started her catering business in 2010.

It was as a band councillor that Gagnon first encountered representatives with Aramark, an Alberta- based company which has achieved silver status in the Canadian Council for Aboriginal Business’ Progressive Aboriginal Relations program.

Landing the catering job for a large chiefs’ assembly meeting in 2012 — and the compliments she received afterward for her traditional Aboriginal dishes -- gave her the confidence to pursue bigger things.

As a full proprietor for Cree Quest, Gagnon hires band members for events. “A lot of them didn’t have the work experience,but they knew how to cook a darn good meal. Why not give them the opportunity to display their skills and get a bit of training at the same time?”

Hooking up with a major player like Aramark gets her foot in the door toward landing bigger contracts. “They’re an excellent team. The sky’s the limit,” said Gagnon, who aims to pursue contracts for camp catering and accommodations with some of new hydroelectricity projects now under construction in the region.

Gagnon wants to position her company to be on the forefront of any planned development in the North. “It’s a wide open field and I want to be as competitive as possible. Any type of development happening out there that requires any type of remote workplace service, I want to be the one to provide that.” She also wants to build training capacity and generate wealth in her home community by providing good- paying jobs.

“My idea is to certify others to take these opportunities that are happening in their territories and get yourself trained, get the experience and really identify what you want to do as far as your long-term career.”

Gagnon hopes her success will inspire and create a new generation of Aboriginal entrepreneurs and business owners.

Mishkeegogamang Ojibway Nation improving broadband capacity
Feb 12, 2020 11:00 AM
Comments
We welcome your feedback and encourage you to share your thoughts on this story. We ask that you be respectful of others and their points of view, refrain from personal attacks and stay on topic. To learn about our commenting policies and how we moderate, please read our Community Guidelines.