Drones taking to the skies in Moose Cree First Nation 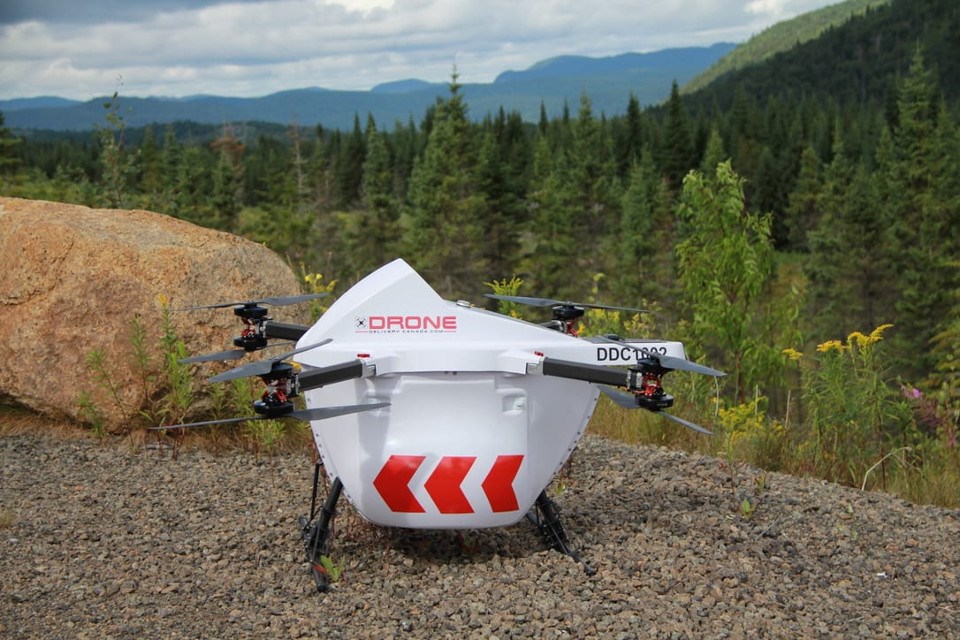 Moose Cree First Nation is optimistic that its drone delivery service – in agreement with Drone Delivery Canada – will be up and running next summer. (DDC photo)

If all goes as planned, Stan Kapashesit is hopeful that a long-awaited drone service delivering goods between the remote communities of the Moose Cree First Nation (MCFN) could be up and running next summer.

Once operational, the innovative service will employ drones supplied by Drone Delivery Canada (DDC) to deliver medical supplies, mail, food, and other packages between Moosonee and Moose Factory.

The two communities are located along the western coast of James Bay, about 315 kilometres north of Timmins, and separated by the Moose River. They are accessible by air and rail.

“I think people are watching and eager to learn about it more, and I’m certain the whole nation will be watching once it’s fully implemented,” said Kapashesit, MCFN’s director of economic development.

Moose Cree and the Vaughan-based company signed a $2.5-million agreement in December, 2018, following test deliveries of medical supplies using DDC’s Sparrow drone, which the company reported were carried out “flawlessly.”

Although the Sparrow is only capable of carrying a 10-pound payload, DDC’s other models – Raven and Condor – can carry 25 pounds and 400 pounds, respectively. The company is now working on a model that could carry up to 2,500 pounds.

Having drone delivery service is anticipated to enhance transportation logistics while reducing costs for the First Nation.

Although earlier estimates suggested the service could be up and running in early to mid-2019, Kapashesit said there are still a few details to be worked out before it will be operational.

Currently, Moose Cree is working on securing the required $2.1 million to get the program up and running, which would include the construction of drone delivery depots and for training. Applications have been submitted to provincial and federal funding agencies.

“In this instance, because the funding element is quite high – and, of course, we want to do our due diligence as well – we want to ensure what we’re proposing to do is accurate, feasible, and can be self-sustaining in the long run,” Kapashesit said.

MCFN has retained NeXus Consulting Group, a management consulting firm at the University of Toronto’s Rotman School of Management, to fine-tune its business plan and feasibility study.

As the report nears completion, MCFN is lining up meetings in the new year with funders to present its findings. If they see merit in the proposed business model, Moose Cree will move to the construction stage of the project.

“We’re hoping by the spring we’ll have some announcements from funding sources, leading into the building season next year,” Kapashesit said. “And by summertime, we’re hoping that we get all the funding approved, and shovels are in the ground, and drones are taking off.”

Each community’s drone delivery depot will have a command centre and a takeoff/landing pad.

There will be jobs for up to 12 people to operate the system, and training will be directly provided by DDC at its operations centre in Vaughan.

At the outset, Moose Cree will offer the service on a pay-per-use basis, but eventually will transition to ongoing agreements with both commercial and private customers.

For example, businesses and organizations such as the hospital or Canada Post could use a drone to deliver medical test results or letters and packages. But individual residents could also use the service to send parcels to family.

“What we envision will happen is we'll still utilize local carriers and local transportation mechanisms that are in place already to be able to provide delivery from, say, the airport or the train station to the depot for further transportation on the drone,’ Kapashesit said.

“Our intention is not to take away any existing jobs, but to add on to that capacity.”

The community is already thinking ahead to the potential for enhanced services. For example, if a resident were to head out on the land to hunt and forget important medication, a drone could be deployed to make a delivery.

“The long-term vision is to increase uses in different areas of delivering,” Kapashesit said. “It’ll be a more cost-effective measure initially, we think, in comparison to, say, chartering a helicopter to go drop off medicine.”

There’s also been talk of establishing a DDC satellite office in the community to provide ongoing training.

Kapashesit sees that as an ideal opportunity to engage local youth, who might be enticed by the opportunity to apply their videogaming skills to meaningful work.

If they enjoy gaming, he reasoned, maybe drone operation will catch their imagination and set them on a unique career path.

“I’m hopeful that this will inspire some youth from all areas to consider this technology as a career option and, hopefully, once we roll out, that we provide those training opportunities to youth,” he said. “That’s my goal.”