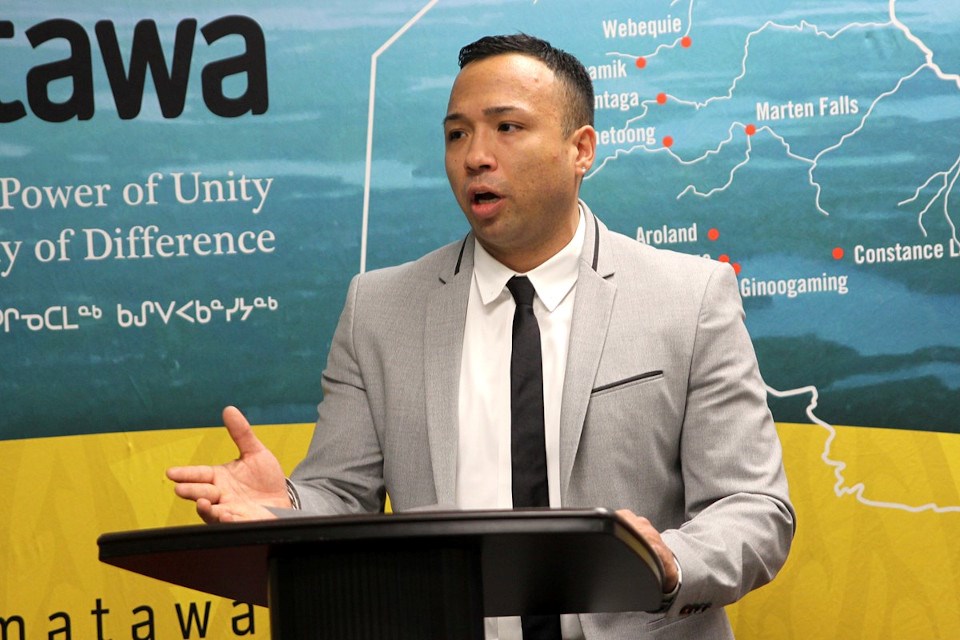 The passion in his voice speaks of the advancing cadre of young Indigenous leaders. Leaders who have education, voice, the right and the will to kick things to the next level. Jason Rasevych is part of this new generation that has reached a critical mass.

“There is now change opportunity to transform community and people’s lives. That’s what motivates me.

"Education is key in all of this.  Education on all fronts,” said Rasevych, a member of Ginoogaming First Nation, a small Anishnawbe community near Longlac in northwestern Ontario.

“I had looked at staying at Durham College (in Oshawa) in economics. I was pursuing a career in marketing but something kept pulling me back north.  Next was business administration at Confederation College here in Thunder Bay, and then I went on to Lakehead University and got my bachelor’s degree in business.”

Well known in the region for his entrepreneurial work in First Nation economic development, he has attracted major investment in negotiating agreements to deliver natural resources, energy and broadband projects to remote communities. He also president and a founder of the Anishnawbe Business Professional Association.

At a very young age, the model of his father’s actions set Rasevych’s direction.

Rasevych’s father worked for CN Rail, starting in Longlac and moving up into systems design at corporate headquarters in Montreal. Upon retirement, he took up a second career was in economic development.

“He was very instrumental for me, as Gabriel Echum (a highly respected Ginoomgaming leader and elder) was for him. Even when we were in Montreal we would go back each year to Longlac to go goose hunting, to go back to our trapline, and to go fishing. Traditional teaching and survival off the land was an important to my father, and then to me.  His efforts were early inspiration for me,” said Rasevych.

“His work ethic, his drive, I was grateful and lucky to watch him in action. Maybe I’ve been groomed to deliver on a process he and his cohort started.

“I was blessed to be put in positions of responsibility early. I have a portfolio of opportunity.  A lot of my history aligns with the strong pillars of my current employer; that includes community health and well-being.”

Rasevych was recently hired at Deloitte Canada, cast into a new role as partner of financial advisory practice and national leader in Indigenous client services.

For a year or more, he researched the national business consulting firm to confirm if the fit would be correct.

“This opportunity came up and my role as national lead definitely shows the firm’s commitment to the Reconciliation Action Plan. The fit was right.”

The words and actions were authentic, he said.

“I help pursue Indigenous, inherent ancestral rights as economic rights. I have a First Nations’ understanding of risk and reward, including being strategic. You only get out of life what you put into it, and one of my key actions is to educate corporate Canada.”

Leading the Indigenous Trust Services practice at Deloitte is another component of his work.

“I try to get in as much reading as I can, starting my day with the Wall Street Journal alerts,” Rasevych said.

“I’ve been involved in David versus Goliath projects in northwestern Ontario, now I have opportunity to encourage bigger impact on a national scale. We (First Nations) are more than points on a map. These are five- to eight-year battles. It takes a lot out of you but it can transform peoples’ lives. Community consent to go forward is always what should be asked for, not assumed. Not waiting for someone else to build equity and economic partnership models, we should be encouraging action within and amongst communities,” Rasevych said.

“I remember going to Kahnawá:ke (outside Montreal) as a kid and listened to great leaders. I asked: ‘Why are we fighting? What are we fighting for?’ I think those were good questions then, and even now. I never thought of working with Indigenous nations.  It was my father’s influence again that got me involved in, and with, tribal council and at the community level in finance and resource development. Something always pulled me back to northwestern Ontario. I will never be in a position to compromise my values and my world views that I gained at a young age at the Oka rallies. For me to witness how my dad challenged the MNR (Ministry of Natural Resources), how we took on Ontario Hydro in ‘98, the timber claim in ’99, well, it built up an aspiration in me to challenge infringement.”

Invited to Guatemala in 2015, Rasevych spoke on advocacy strategies to the Indigenous Mayan tribes of Central and Latin America. While there, he promoted government and corporate adoption of the United Nations Declaration of Indigenous Peoples (UNDRIP) and the Free Prior Informed Consent Principles.

What will Rasevych do at Deloitte, surrounded by some of Canada’s leading experts in business consulting, tax and financial advisory services?

“We will do what we need do to, to prepare. I am just really excited about building capacity, development planning, and negotiations beyond resources,” he said.

“How can First Nations better control and own their natural resources and infrastructure? One is access to capital. Another is taking control of energy production, pursuing independence including reducing or eliminating diesel,” through clean energy alternatives such as geothermal, solar and micro-grid infrastructure.

“Increased participation is the blueprint for success. It worked in generating revenue for some already, but decision-making has to come from the people. The Ring of Fire is a good example how a top-down approach should not be used. A more circular process includes talking to, and with, adjacent communities early. We need to walk together.”

Deloitte will provide all the technical, legal and planning support he requires.

“Moving forward includes a stake in ownership, implementing treaties, high-level authority, management, self-determination and independence. Indigenous business is important in this. We now will engage in wealth management where once we managed poverty.

“Inuit, Metis, Frist Nations, we have to include all. To be in the boardrooms and have the ear and attention of corporate Canada and push for diversity, equity, inclusion.”

This story was made possible by our Northern Ontario Business Leaders Program partner.