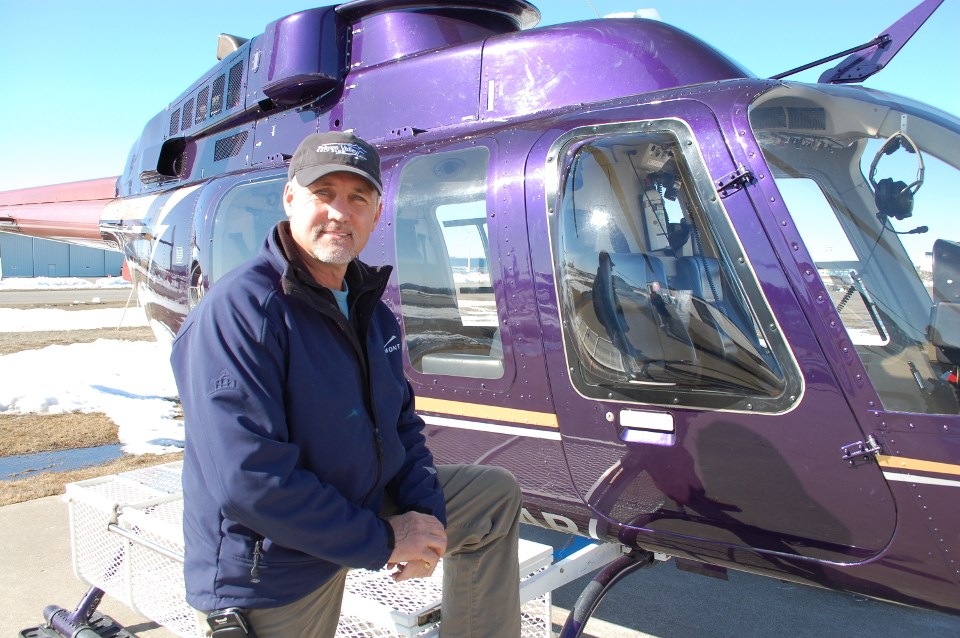 Mark Wiskemann’s lifelong passion for flight led him to launch Wisk Air Helicopter, which serves the mining industry from its headquarters in Thunder Bay. (File photo)

Mark Wiskemann recalls the moment he decided to embark on a career in helicopter aviation.

While working as a young forestry technician deep in the wilds of Terrace, B.C., a helicopter was dispatched from Prince Rupert to shuttle him and his crew out of the bush.

Wiskemann was waiting on a bridge nestled at the bottom of two mountain ranges, when he heard the distinctive chopping sound of the Jet Ranger sent to pick them up.

“You could hear the helicopter approach for quite some time, for maybe two or three minutes out. Then it just appeared and landed. That was the very second I knew,” said Wiskemann, the president and operations manager of Wisk Air Helicopters in Thunder Bay.

“It was so salient, the sound. All my senses were activated and I went: that’s what I’m doing.”

Three years later, the farm boy from Russell, Ont., was accepted for Canadore College’s helicopter flight training program where he graduated as one of 15 pilots in the class of 1979.

Licensed to fly in Canada, the U.S. and the Caribbean, Wisk Air’s reach extends beyond their Thunder Bay headquarters with secondary bases in Pickle Lake and Red Lake, and a maintenance shop in Brandon, Man.

The air fleet of nine consists of four types of Bell aircraft with roles ranging from observation helicopters capable of mapping and surveying right-of-way construction and environmental assessment work to heavy lift aircraft with the ability of hauling steel structures and belly tanks for fire suppression.

Wiskemann’s introduction to northwestern Ontario was as a young pilot and base manager for Midwest Helicopters in the mid-1980s.

Within a month of arriving in Red Lake, a massive forest fire ignited in May 1980 in what became known as Red Lake 14.

By the time it was extinguished in early October, Wiskemann estimated he had logged about 500 hours in the seat of a small Jet Ranger, ferrying personnel and flying as an observer.

“Back then there were no flight and duty time restrictions, so I just flew for that entire period every day.”

The place was also in the midst of a gold exploration boom with seven helicopters in Red Lake constantly positioning drill rigs, moving core, resupplying camps, and conducting aerial surveys.

The flurry of activity abruptly stopped when the Mulroney government shut down the federal flow-through tax incentive program.

“It changed overnight the face of exploration in Canada.”

Wiskemann had started Wisk Air in 1984 as a side hustle helicopter leasing business.

He eventually secured his own helicopter, a Jet Ranger, and relocated to Thunder Bay to start his own operation inside a rented hanger and office space at Thunder Bay Airport.

As in those early days, the diversity of work varies from day to day.

It can involve taking tourists on sightseeing excursions of the north shore of Lake Superior or being contracted by the Ministry of Natural Resources and Forestry (MNRF) to relocate threatened caribou from an island in Lake Superior.

Last November, the company disassembled its large Bell 412 for shipment to Australia for what turned out to be a catastrophic fire season.

“You offer your services where you can,” said Wiskemann.

Grassroots mineral exploration work has dried up in recent years, but Wisk Air has found new opportunity in powerline construction.

The company helped install the line from White River to Harte Gold’s Sugar Zone Mine site in 2018, along with a 14-month contract to connect the Henvey Inlet wind farm, south of Sudbury, to the Ontario grid.

It provided the impetus to acquire a heavy lift helicopter, a Bell 214.

“We believe there are 33 operating in the world, five in Canada, and we have one of those,” he said.

The steel lattice work for large powerline towers are broken into two lifts of the bottom and top half, which are delivered and assembled with the assistance of ground crew.

Wisk Air had been involved in the Ring of Fire exploration activity in the James Bay region since 2006. But with development in the Far North mineral camp stalled, the company has secured alternative work through a long-term fire contract with the MNRF.

The next big project they’re eyeballing is the upcoming Wataynikaneyap (Watay) Power project that will connect 17 remote First Nation communities to the grid for the first time.

Wiskemann is eagerly anticipating plenty of spinoff work generated from the $1.6-billion project, with the possibility of a Far North fibre-optic network and permanent road construction north of the Trans-Canada Highway.

“All of that is remote and has to occur somehow, so helicopters are an obvious choice.”

In preparation, Wisk Air has formed two secondary First Nation majority-owned helicopter companies with a number of community partners along the Watay corridor.

“The goal is to bring long-term benefits to the First Nation community members and provide them with opportunities not currently available,” said Wiskemann.

The spectrum of opportunity over the next decade could involve apprenticeships and pilot training, right up to management positions and potentially company ownership.

“In addition, we expect through our long-term connections that we will have our aircraft invited to work on their projects in their (traditional) territories.”

While the range of work is ever-changing, Wisk Air has managed to retain a core group of experienced and trusted employees, some as long as 25 years.

In the mix are Wiskemann’s two children, Kale and Kaetrin, who are now commercial pilots.

“We spend a lot of time and effort ensuring that our flight and grounds crews have annual training and that embellishes their stature within the industry, so their credentials and value increase constantly.”

They’re involved in the daily 10 o’clock meeting to discuss operational changes and mistakes are viewed not punitively but as teaching moments.

“We communally get together to write and activate policies that allow for growth. The sole benefit and belief is that if the employee is motivated to do well, then the outcome of the business will be better.