The challenge of being Indigenous in the sciences

Laurentian University engineering student speaks on how to get more Indigenous people into STEM programs and executive offices
Jun 13, 2018 9:30 AM By: Karen McKinley 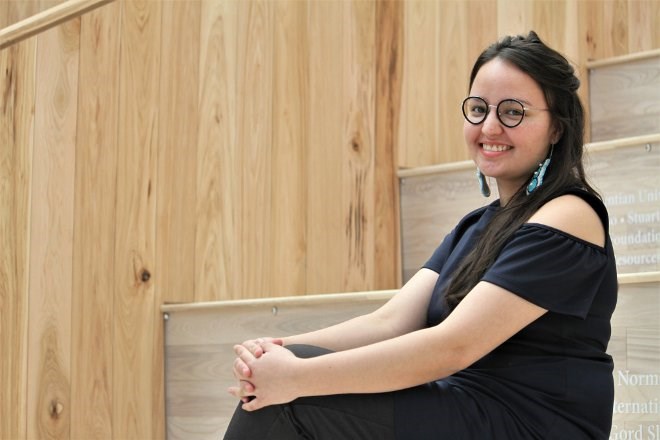 Kaella Earle, currently the only Indigenous woman in the engineering degree program at Laurentian University in Sudbury, says despite progress, there are still many barriers keeping Indigenous people from pursuing careers in sciences and positions in upper management.

A student at Laurentian University in Sudbury – currently the only Indigenous woman in the engineering degree program – is on a mission to get more First Nations people to the sciences and boardroom tables.

Heading into her fourth year of studies, the Wikwemikong Unceded Territory member from Manitoulin Island is also working as a district engineering tech intern at Union Gas, now Enbridge.

Since childhood, Earle said she has received support and encouragement to pursue her career aspirations.

However, she points to deep-rooted problems that are keeping Indigenous people out of STEM careers, including colonial mindsets imposed on First Nations, distrust over companies working in traditional areas, and the financing of Indigenous education.

“There are a lot of barriers. There are almost no Aboriginal people in engineering," she said.

“When I started at Laurentian, I felt vulnerable, being the only one in engineering. I've been studying with Dr. Jesse Popp (adjunct professor in the Department of Biology) and we are learning Indigenous people have had influence in the areas of science, technology, medicine and engineering for millennia. We had an advanced society here before contact.”

Much of the problem at the information and history level has stemmed from how Indigenous people were viewed. Even now, Earle said there is a lot of false rhetoric depicting them as “savages.”

They have been made to feel they don't belong in the technological fields or at the corporate level and have developed a colonized mindset, she said.

As well, she explained governments have been chronically underfunding First Nation community education programs for decades.

This puts students at a disadvantage. When they head to postsecondary education, they are behind their fellow students.

“It's a toxic cycle. Schools are not set up for Aboriginal students' needs,” she said. “To exist as an Aboriginal is a challenge.”

How engineering is taught also has issues. It offers a social angle, Earle said, but currently does not look at treaties and their impact.

Earle credits her love for sciences from her father, who was an engineer.

He would take her to school with him while studying, take her to factories to show how machines and their parts worked, and take pictures of mechanisms when he travelled.

Earle said the teachers and administration at Wikwemikong High School encouraged and nurtured her love of STEM subjects.

The staff there, she said, honoured the students and parents.

“It felt strange hearing about the university being on Robertson-Huron Treaty lands, but there was very little visually to demonstrate that."

However, the university has made strides in making Indigenous students feel more inclusive in certain parts of campus, most notably the new Indigenous Sharing and Learning Centre, which opened last fall.

The location, in the new atrium and front entrance of the main campus has been very helpful for Indigenous, Métis and Inuit students, she said.

“They really helped me feel welcome on campus. Without them, I'd be having a really difficult time,” she said.

Another place is Laurentian's McEwen School of Architecture in the downtown core.

The design is open and organic, and the signage includes First Nation languages, which Earle said helps Indigenous students feel they belong in that space.

Despite the improvements on campus, challenges remain.

The University of Sudbury, a federated school on the Laurentian campus, has been running Aboriginal studies programs for decades. Earle would like the school and its professors to be given more credit for their work.

Another area of improvement she cites is having more educational content built by First Nations, rather than the bulk of it being provided from non-Indigenous sources.

There's also a deep mistrust of academia after generations of students had their identities stripped from them.

Without that understanding, she said, this is leading to lack of consideration in professional levels.

The issue came to light after a presentation on the Ring of Fire in Sudbury on April 24. There was no Indigenous representation, although someone was scheduled to appear.

“I was told the forum would go ahead without (representation).They shouldn't have had that talk. Outsiders should not be speaking for us.”

Earle has received negative responses and criticism for working for Enbridge which, she said, is unfair to the company and exemplifies her point.

“It's not so cut and dry evil for companies to be on the land. Often, they are faster at bringing change than governments.”

For that, Earle says resource management companies could be using their power and knowledge to lobby governments to foster faster change.

Many companies make an effort, within their own corporate culture, to foster greater understanding.

Earle was given the chance to run a cultural camp last year and invited people she believed wanted to be a part of changing their corporate environments.

“It was exciting to have those people and talk about ideas, knowing they are fighting for changes."

Earle is also part of a task force that encourages training for employees for greater understanding.

Change will be slow in coming, but she's encouraged by what she sees happening with the younger generations.

“Everything will fall into place. Youth will know they have the power and knowledge to create change.”