Plug in to underground digital innovation 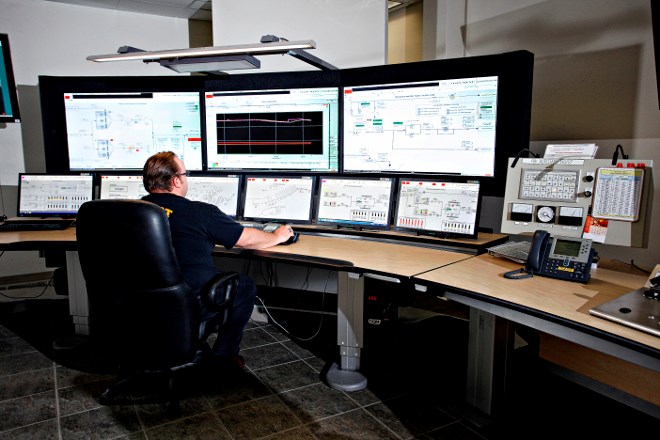 Work station at Vale's Totten Mine in Sudbury.

Digital technology is part of so many aspects of life, yet there is little talk over the radical changes it is making in the mining industry.

To help bring awareness to this phenomenon, and bring digital mining companies together in one place, Partners in Achieving Change Excellence (PACE) is hosting Beyond Digital Transformation, Feb. 1 at the United Steelworkers Hall in Sudbury to discuss how mining companies from around the world see the future of digital technology in their industry.

“The conference is really for anyone who wants to plug into where the mines are going from a digital transformation perspective,” said Neha Singh, the “change guru” and project manager at PACE.

And by digital transformation, she said they are looking at how companies and individual mines are using technology. She said the mining industry is a great example of a sector that hasn't consistently embraced digital innovation underground for various reasons, including connectivity.

She explained PACE saw a need for such an event. At the same time PACE is hosting beyond Digital Transformation, there are about five other mining conferences happening in Canada and the United States.

“Now, because technology has advanced so far, getting access to things like Wi-Fi underground, and communication from underground to surface is getting easier,” she said. “Mines are now asking why don't they know, and why can't they get transparency, how much are we producing on a regular basis, how can we manage safety, when we clear out a mine, that we haven't left anyone behind?”

She said mining is at what she called an "inflection point," where activity has been stagnant for years, but activity is starting to pick up and they are looking for safer and more efficient ways to operate.

The turn to digital technology is just starting, with few companies actively pursuing it. Others are looking to see how it could make their companies work faster, safer and increase profits.

The conference will have a slightly different format, as it will not have companies selling their products and services. The aim is to bring companies together to discuss projects, their concerns, and network.

“What we are saying is let's see what the companies are saying,” she said. “There will be booths and vendors, but the vendors will be sharing their innovation with the rest of the world."

Singh said at the pace technology is growing and changing, even cell phones go obsolete within months. They are calling it Beyond Digital Transformation because, in a year from now, digital may be obsolete as well. It is a comprehensive look at how technology can be implemented as quickly as possible.

She explained a good company learns the problem mining companies are looking to solve. They take technology already being used for other applications and find ways to adapt it to underground.

So far, PACE is doing a survey of mining companies to see where the highest demands are to understand the challenges. The two they've been told are getting data straight from the face on how much is being produced. That would help better predict how much a mine is producing, she said.

The second is autonomous mucking to get people out of harm's way and having operations continue when people are not around, usually between shift changes.

“Safety is huge, and the best way is to eliminate the risk,” she said.

While humans can never be fully eliminated, she explained that there could be a way to keep them out of hazardous situations. She used the example of her husband, a geologist at Vale.

“His job is automated, but he still has a job."

The applications can have long-lasting effects on job creation, including extending mine life by optimizing a life of mine plan. Mines are a finite source of minerals and companies are pressured to produce to pay the shareholders. With better technology, it can make the mine plan more transparent, increase profits and keep the mine running longer by mining the right spots.

Advocating for technological change through this conference, she said, will ultimately benefit the entire resource industry by bringing about change in practices.

Mining comes down to cost, she said, and there are still companies that are unaware of the benefits of new technology to their bottom lines.