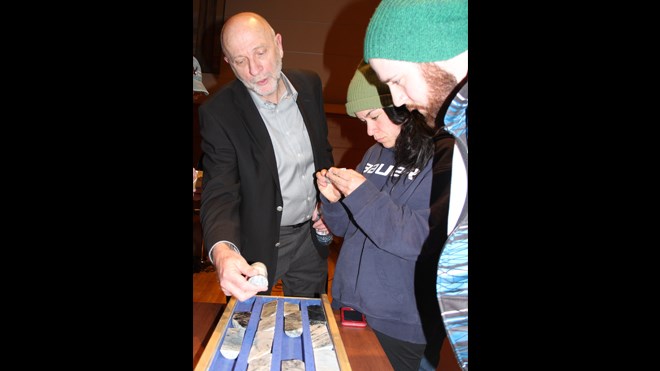 But he is reluctant to say if it could be the first lithium mine in Canada.

“It could be a few years before we go into production, but we are very happy with what we are seeing,” said Drever, vice-president of exploration of the Sudbury-based junior mining company, formerly known as Houston Lake Mining.

“The deposits are very clean, very high grade and that's generating a lot of interest.”

He was speaking on the latest findings from the project at the monthly meeting of the Sudbury Prospectors and Developers Association on March 20. His presentation took a look at the progress, from discovery to preliminary feasibility study, as well as a proposed mine site plan, possible winter and all-season roads, and a rough estimate for a production date.

The project is located 175 kilometres north of Red Lake, near the First Nation communities of Deer Lake and North Spirit Lake.

What really excited them, he said, was this deposit has no inherent iron in it.

The bulk sample they took was so low in iron, Drever said they actually introduced iron during the grinding process.

Having low iron oxide in the sample is important. Technical-grade lithium has to have less than one per cent iron in it for making glass and ceramics.

“Pegmatites, like we have here, often has high iron in it, and it needs to go through chemical processing to produce lithium carbonate,” he said. “Our product can basically be taken out of the ground, (you) grind it up, do a process of floating to concentrate the lighter material off, and you have a concentrate that has low iron in it.”

Drever drew on his experience in uranium exploration to try a technique to locate lithium deposits.

He hypothesized the element would leach into the ground around a deposit near the surface and would be found in the plant life, just like uranium.

He took core samples from trees over a section of where he suspected the deposit was going and, indeed, found traces of lithium in the wood.

Drever was cautious on any firm dates for production, but the company is hoping for a 2022 date if demand for lithium continues to increase.

He claims this project is the biggest lithium deposit in North America.

And having very little iron oxide means it is very favourable to use in technical applications like glass, ceramics, cookware and induction cooktops.

Even with increased demand for lithium in electric vehicle batteries, he said the lithium contained in the PAK project is prized for ceramics and glass.

In their relations with area First Nations, Drever said the company has hired many members from the three bands to work on the project and are in talks with the communities to develop all-season access roads.

There's been interest in the project from a European glass manufacturer and from China.

“China is at the forefront of the lithium boom as a result of electrifying transportation primarily based on pollution problems in major Chinese centres,' said company president-CEO Trevor Walker.

"The central government is currently transitioning from subsidy policies to mandating vehicle production in order to reach their policy targets.

"To date, China has focused primarily on the supply of lithium from Australia to feed the conversion plants to produce downstream lithium salts required for lithium-ion battery electrolytes and cathodes also produced there.”

Mining watchdog accuses Impala Canada of putting workers, communities at risk
Jun 3, 2020 10:00 AM
Comments
We welcome your feedback and encourage you to share your thoughts. We ask that you be respectful of others and their points of view, refrain from personal attacks and stay on topic. To learn about our commenting policies and how we moderate, please read our Community Guidelines.