THE DRIFT 2019: The cold, hard realities of mining on the moon 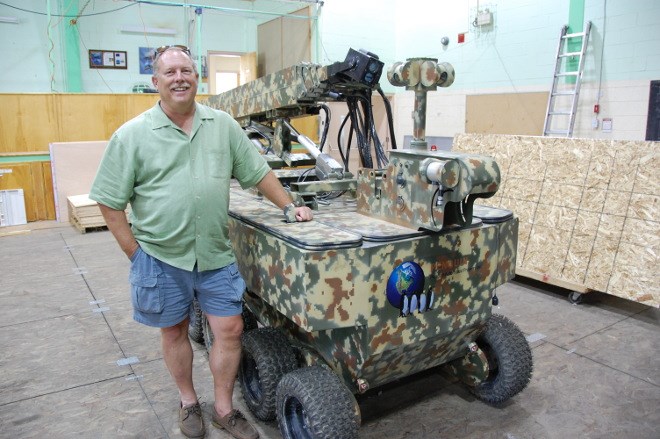 Mining engineer and Penguin Automated Systems CEO Greg Baiden has been massaging a comprehensive plan to mine water, and possibly find other minerals, on the south pole of the moon. (File photo)

Greg Baiden once introduced himself at a NASA space mining conference in California as a "recovering asteroid miner."

The CEO of Penguin Automated Systems had been enlisted by the agency to bring a healthy dose of pragmatism to a roomful of high-minded scientists and entrepreneurs about the realities of mining in a hostile and extreme environment.

After listening to more than his share of science fiction stories over the years, Baiden felt he had to inject some Sudbury sensibility to the wider discussion.

So to establish his credentials, Baiden began his presentation by mentioning that his former employer, Inco (now Vale), has been mining the remnants of an asteroid impact in Sudbury for the past 130 years.

Mining engineers are rare in the space community, and Baiden finds there’s an overall lack of understanding of the economics in determining what’s feasible and what’s not.

“It’s the equation: how do you turn that mineral into ore?”

Baiden said they’ve developed a number of off-the-shelf technologies that can be adapted for future space work, including a patented optical communications system that allows robots, working in tandem, to receive and relay commands.

He also sits on the board of Shackleton Energy, a company established to mine the moon’s water and provide it for customers on orbit.

To advance the discussion, Baiden’s prepared a strategic mine plan for the moon, now in its “fifth or sixth iteration,” which he feels is the most credible out there.

“I’m trying to put the miner’s perspective on it. All the background I’ve had in building the robotic systems for Inco and our global clients, I can bring to that future stage of mining, which they typically wouldn’t see.”

Baiden is a pioneer in telerobotic mining, beginning as Inco’s manager of mines research from 1986 to 2001.

His research team made national news in 1994 with a successful demonstration of autonomous mining when a tele-operator in Toronto manipulated two underground loaders, some 4,000 feet down (2,200 metres) in a Sudbury mine, from a distance of 400 kilometres, through the use of an advanced wireless network.

His ongoing pursuits at Penguin, to push the limits of that technology, attracted the attention of the Canadian Space Agency (CSA) a decade ago.

NASA wanted Canada to take the lead in developing the space mining technologies, and the CSA’s head of strategic planning, Louis Grenier, wanted Baiden to draw up a futuristic equipment list for Ottawa to sink research dollars into.

Without knowing what the environment was like and what commodity they were after, he decided to produce a comprehensive moon mining plan, beginning at the grassroots stage.

“What I recognized early on is that there are (project) showstoppers, big-time showstoppers."

The moon’s one-sixth gravity would hinder miners in using hoists, drills, and driving vehicles, and temperatures can dip to minus 240 Celsius.

But the lack of lunar atmosphere creates a major threat in the form of large concentrations of radiation from the sun.

With a graphic provided by NASA, Baiden notes it’s by sheer luck that astronauts on the Apollo missions in the late 1960s and early 1970s avoided these random spikes, which would have killed them in their capsules, because of insufficient protection.

That's why all new approaches are needed to make mining on the moon work, said Baiden.

The low-hanging fruit of what to mine first on the moon appears to be water, with the idea of processing it to produce liquid hydrogen rocket fuel for space exploration.

While there are plenty of preconceived ideas about lunar mining, Baiden finds little is known about the moon’s geology other than what’s postulated from the 60 pounds of sample rock brought back from the Apollo missions.

Without any drill core in hand, Baiden said it’s unknown if that water is frozen beneath the surface in a pristine sheet of ice, if it’s mixed in with lunar regolith (top soil), or even at what depth it’s located, which all factor into the mining and processing methods.

“The right thing you have to do is prospect.”

Baiden isn’t banking on a lunar base in his lifetime, so he’s content to be exposed to NASA’s best and brightest. That relationship enables him to take what he’s learned and apply it to his terrestrial mining equipment systems business with Penguin.

“I’m still working on robots for the mining industry – which is where my bread and butter is – and those robots get the flavour of this put into them because I get access to technical knowledge that nobody else gets access to.

“As we work on this for our mining clients, they’re getting the best parts of the space program that we’re able to bring to them.”