Rector Machine Works going strong after close to a century
Apr 8, 2019 10:00 AM By: Lindsay Kelly 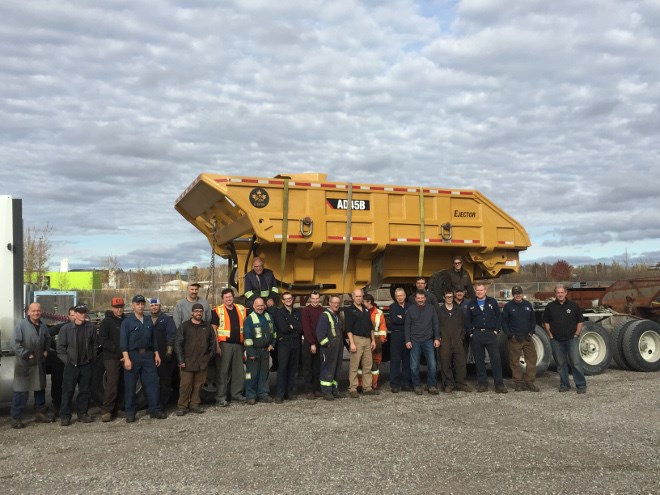 Rector Machine Works of Sault Ste. Marie has been in operation for 85 years and remains family owned and operated. (Supplied photo)

When the forestry industry tanked in the mid- to late 2000s, Rector Machine Works didn’t wait around for the market to rebound. After all, the Sault Ste. Marie shop had been there before, when steel slumped in the ’80s, and it knew that standing still was the worst thing it could do.

Instead, the family-run business took a chance on mining and doubled down on its attention to customer service. Rather than cutting sales and marketing efforts, Rector took a more unique path, committing to visiting customers in person once a month.

“We were doing the small things, maybe the cheap jobs that nobody else really wanted,” recalled company president Dave Rector, who, along with his siblings Mark and Michelle, represents the third generation of family ownership.

“We were still there trying to help out where we could, trying to increase or decrease cash cost for the customer and finding innovative ways – maybe payment plans or financial help – for those companies going forward, and putting a trust in a handshake.”

Monthly, in-person visits are still part of Rector’s day-to-day operations, and the approach has paid off. While Rector’s work in steel and even forestry has rebounded, today, mining jobs comprise roughly 50 per cent of its business, Rector said.

Operating out of a 15,000-square-foot facility in an industrial park in the city’s north end, the shop provides custom cutting, forming, design, welding and industrial contracting services for the mining, steel, forestry, energy, construction, and food industries.

Rector also operates a rebuild exchange program for Caterpillar ejector boxes, refurbishing existing equipment at half the cost of a new piece of machinery.

The company’s work has taken it throughout Ontario, across Canada and into the U.S. Some of its key mining clients have included Alamos Gold, Wesdome, Goldcorp, and Harte Gold.

Rector cites his staff as a primary reason behind the shop’s continued success, and his respect for their skill and commitment to quality is palpable.

“It’s actually humbling to go out on the job site and watch these people work for, not only me and my brother and sister as owners, but Rector’s as a legacy business,” Rector said. “Being 85 years old and watching the talent that’s passed through – we’re only as good as our people, and our people are first class.”

That appreciation for the people was instilled early on, by his father Herv Rector Jr., and before him, his grandfather, Herv Rector Sr., who founded the business out of a small Espanola shop in 1933. And the third-generation owners feel a great responsibility to keep their staff of 50 working.

“So we’re always looking for, not so much the next best thing, but where we can keep our people working, being able to create value within the company to create a profit, or at least to break even,” Rector said.

A new area of interest could be in Nevada, where the company sees a potential market for its ejector box refurbishment services. Over the course of the last year, the company has made some inroads to the Elko area, and Rector said management will likely make a decision in the next year or so as to whether they can make it work.

Despite their longevity, the company has experienced its fair share of ups and downs over its lifetime – it’s inevitable for a small, family-run company that’s been going strong for nearly a century.

But last December, the company faced one of its greatest challenges with the loss of the family’s matriarch, Rector’s mom Sandi, who had run the company alongside Herv Jr. for 52 years.

A well-respected and valuable member of the Rector Machine Works team, Sandi will be missed, not only by her family, Rector said, but the entire Rector team and the Sault community.

He’s grateful for the outpouring of support that’s come from the industry that’s embraced them.

“We’ve been in business for 86 years, and we will continue with her watching over us as our guardian angel to carry on for 86 more,” he said. “Our motto is we’ll keep doing what we’re doing, we’ll do it at our own pace, and we’ll have people watching over us to make sure we’re doing it right.”

THE DRIFT 2019: Mining manager and designer balances dual roles
Apr 5, 2019 10:00 AM
Comments
We welcome your feedback and encourage you to share your thoughts. We ask that you be respectful of others and their points of view, refrain from personal attacks and stay on topic. To learn about our commenting policies and how we moderate, please read our Community Guidelines.