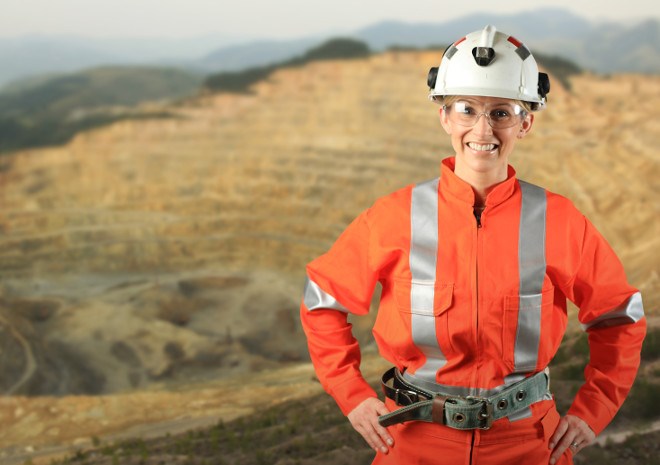 Alicia Woods of Sudbury has found meaningful work in the mining industry, both as a manager for an original equipment manufacturer and in becoming an industry entrepreneur. (Supplied photo)

When Alicia Woods was vying to enter the mining industry, she knew that name recognition would at least get her foot in the door, but it would take hard work to prove she deserved to be there.

Woods is the daughter of Paul Marcotte who, along with his brothers and father, founded Sudbury-based Marcotte Mining Machinery Services in 1979, designing and manufacturing underground utility vehicles.

As a kid, Woods loved hanging around her dad in the shop, and it was her long-time dream to one day work alongside him in the industry.

“He never made me feel like it wasn’t an industry for me,” she said. “I never once felt that it wasn’t for girls.”

The company was sold a short time after her father’s unexpected death in 1992, and Woods worried her opportunity to follow in his footsteps was lost. Instead, she set her sights on becoming a teacher and was in the process of training for that role when she got called back to Marcotte to work part time. Her passion for the industry was reignited.

“It definitely offers a lot of opportunity for growth and travel,” said Woods, who’s visited mines across Canada and the U.S. and into Latin America. “You’re meeting new people, and it’s always something different every day. There are always challenges that you have to work through.”

Today, Woods serves as general manager of Marcotte Mining where her team is now working to roll out its new line of battery-electric vehicles, in partnership with Siemens, and its new personnel carrier, the RAM40, named for her grandfather, Raymond Arthur Marcotte.

She’s intrigued at the way the industry continues to find new ways to innovate and, in particular, by the new technology it’s moved to adopt. But she concedes the sector could do more to promote its modernization, since, for many, the term ‘mining’ still evokes the image of a dirty old miner with a pickaxe.

“We are new and innovative, there's a lot of opportunity that exists, and it's not just a miner with dirt or grime on his/her face,” Woods said. “It pays well, there's a need for people, and there's opportunity for movement.”

For the most part, Woods said she was welcomed into the industry and supported by colleagues who wanted to see her succeed. She counts Glencore board member Patrice Marin and former Xstrata CEO Ian Pearce among her mentors.

On the odd occasion she’s encountered a male colleague who believed she “belonged at home,” Woods said she addressed it “head on,” and her resolve to address outmoded attitudes has only deepened since taking on a managerial role – and becoming a mother.

“I always ask myself the question: would I allow this kind of behaviour and communication to my daughter?” Woods said.

“You need to learn to become comfortable with the uncomfortable and deal with it, because it’s the only way we’re going to make things change.”

Woods saw an opportunity to enact change in 2014, when she founded Covergalls, which designs and manufactures garments of the same name that are tailored to a woman’s physique.

For too long, Woods reasoned, women in the industry had felt unwelcome, in part because workwear didn’t fit correctly. It was an idea that percolated out of personal experience. For years, Woods tailored men’s coveralls to ensure she could go to work comfortably and safely.

Covergalls’ unique features include snaps at the wrists, an adjustable Velcro waist, and secured pockets, along with a rear opening to make using the bathroom easier. Woods’ products have distribution with major companies like Mark’s and Cintas, and she’s working to expand the line.

“Clothes empower you, and I think if we want females to feel included, we need to make sure they're equipped with safe, proper-fitting workwear,” Woods said. “That is going to help them feel included in the workforce.”

She’s taken that approach one step further, speaking to elementary and high school students about the industry, and working with organizations like Build a Dream, which encourages young women to pursue careers in the skilled trades, law enforcement and STEM (science, technology, engineering, mathematics).

Woods believes women should never allow fear to stop them from pursuing their goals.