Marine shipping is the most environmentally-friendly way to move goods throughout the world
Listen to this article
00:04:12

With the navigation season well under way in the Port of Thunder Bay, a notable trend has emerged: potash shipments from Western Canada are on the rise. In Thunder Bay, potash is primarily loaded to foreign vessels headed to Europe, Latin and South America.

“There was a surge in potash movements late in the season last year that has rolled over into this season,” said Chris Heikkinen, Director of Business Development for the Port of Thunder Bay.  “Thunder Bay is the only export port on the Seaway System for potash, and it’s the closest access to Eastern markets for potash mined in Western Canada.”

The Port of Thunder Bay, he said, is a strategically placed port.

It is the furthest inland port in Canada, and 95 per cent of the cargo that transits the port is not related to the Thunder Bay region. Heikkinen said the port is a hub in the Western Canadian supply chain. Primarily an export port, the benefit of Thunder Bay’s Seaway access is that the Canadian farmer, Canadian potash or coal miner, can get their product to market through this port efficiently as it’s the closest proximity port for shipping bulk commodities East.

The port and the Great Lakes/ St. Lawrence Seaway System are critical to the Canadian transportation system, Western Canada, and to the economy in Thunder Bay.

Compared to other Canadian ports where congestion can cause supply chain disruptions, Heikkinen said, the Port of Thunder Bay offers more ease in export as they have available capacity and quicker ship turnaround in and out of port.

“Upwards of 80 per cent of the cargo handled here is outbound prairie grain,” he said. “Every year vessels carry nine million tonnes of grain grown in Western Canada to Europe, the Middle East, North Africa and Latin America, from the most efficient Western Canadian grain port,” adding that geographically speaking, fewer emissions are released transporting grain from the flat Prairies to Thunder Bay than going over the Rockies to the West Coast.

Over the past decade, Heikkinen said Canadian shipping companies operating on the Great Lakes have invested billions of dollars into building new ships that are more efficient in fuel usage, emit less greenhouse gases, and are able to carry more cargo than their predecessors.

“Three times during our season in 2021, the record was broken for the largest grain shipment to leave Thunder Bay on a ship,” he said “Twice the record was set by a brand new vessel, the Captain Henry Jackman, including on its inaugural voyage.”

Today, marine shipping is more environmentally-friendly than other modes of transportation by far, he said, and moving bulk on the Great Lakes – St. Lawrence Seaway System alleviates highway congestion.

Keefer Terminal and the possibilities, growth and goals going forward

The Port of Thunder Bay operates the general cargo terminal Keefer Terminal, which Heikkinen said is a critical component of the port’s business. Originally built in the sixties and used a package freight terminal, today Keefer has been repurposed to handle general cargo and Project Cargo.

“With the significant export business in the port, it was strategic to seek out inbound cargo going to the West,” he said. “By attracting import business from other routes, the competitiveness of the Seaway System improves because a ship can come in fully loaded with one cargo and can leave the port fully loaded with another.”

Project Cargo is essentially large infrastructure pieces that are pre- manufactured and shipped from overseas through Keefer at the Port of Thunder Bay. Heikkinen said massive things like wind turbine pieces, infrastructure for the oil sands and steel products are examples of what they’re handling. 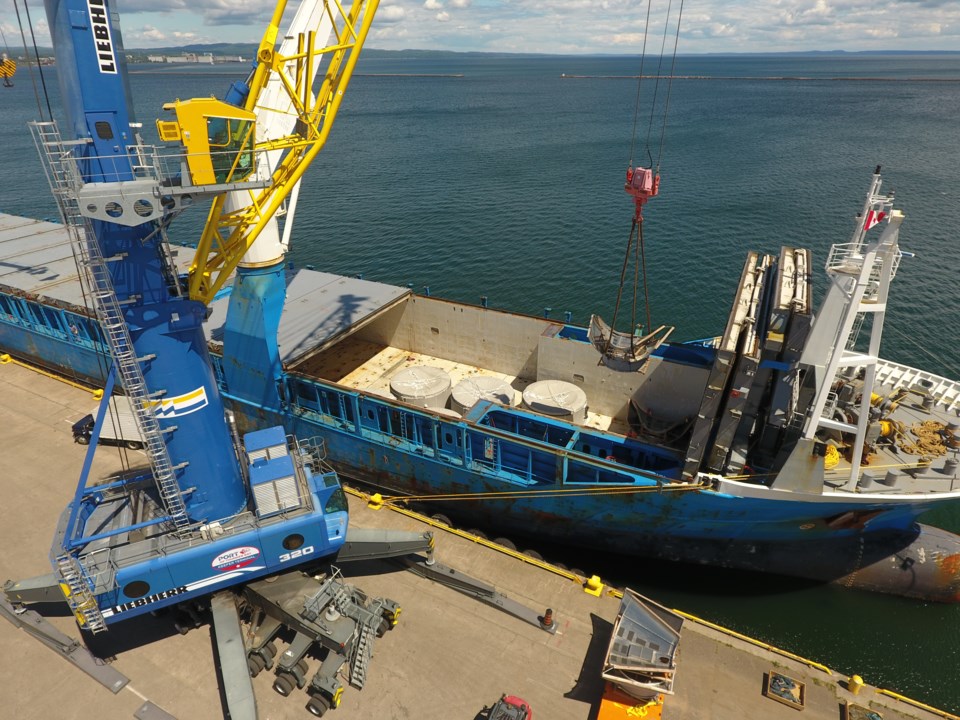 “These are things you need to get as close to where they need to go on water, because land transportation can be cumbersome,” he said. “Together with our stevedoring partners Logistec, we have carved out this niche of attracting these dimensional cargoes to Thunder Bay.”

Last year the terminal handled record volumes of project and general cargo , and Heikkinen expects Keefer to top that volume in 2022.