Université de Hearst is planning to construct a 1,000-square-foot research greenhouse where researchers will study the potential in growing fruits and vegetables in the North.
Dec 15, 2016 9:00 AM By: Lindsay Kelly 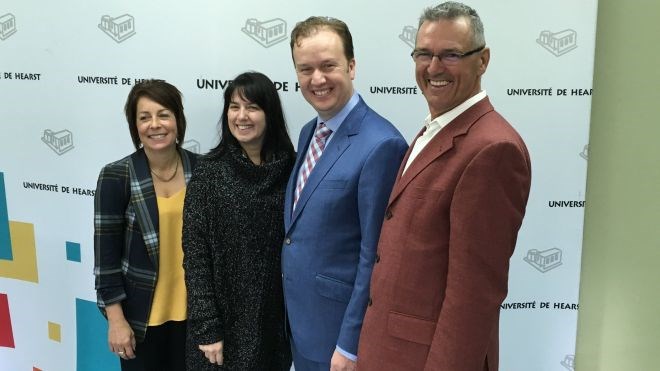 Can warming temperatures lead to opportunity for agriculturalists in Northern Ontario?

Université de Hearst thinks so. The school is planning to construct a new 1,000-square-foot greenhouse, in partnership with existing greenhouse La Maison Verte, as a research facility to experiment growing new varieties of fruits and vegetables in Hearst.

In October, the school received $235,000 from the Ministry of Innovation, Science and Economic Development Canada for the project, and has applied to the provincial government for matching dollars.

If the funds are approved, said Sophie Dallaire, Université de Hearst’s acting president, the school would hire a research chair and a researcher to study various produce varieties that could be grown in the North. The university already has additional partnerships lined up with Université du Québec en Abitibi-Témiscamingue (UQAT) and Collège Boréal.

“We hope that, in the long term, this would translate into laboratoires horticulture nordique (Northern horticultural laboratories), so we would be a research facility where we would, for the North, be doing research for other products also,” Dallaire said.

“And we might extend this initiative to work with the Demonstration Farm here in Kapuskasing that's going to be concentrating on research on beef, so we might, eventually, work with this organization.”

After acquiring the Demonstration Farm in 2015, the Town of Kapuskasing is repurposing the former federal facility as a working farm and an applied research facility.

A farmer who relocated to Kapuskasing from southern Ontario is selling locally grown beef under the Kapuskasing Meats banner, and a number of applied research projects are ongoing. The town plans to set up vacant office space as incubation space for agri-food types of businesses.

Ongoing agricultural research could lead to the development of new programs or course offerings at the university, she added, although that’s more of a long-term objective.

Since La Maison Verte already grows and sells produce through the region, it made them a natural partner when it came to this new greenhouse project.

The impetus for the greenhouse came as seasonal temperatures in the region started to shift. Although climate change is typically viewed in a negative light, Dallaire said the university believes warming temperatures could make way for an agricultural renaissance in the region.

“We noticed that, for growing different fruits and vegetables, it's favourable, so we think that there's an opportunity to try agriculture again,” she said. “We did try a few decades ago, but it wasn't the more favourable climate. But this change is for us an opportunity.”

An increasing demand for healthier, locally grown foods is also fuelling the project, Dallaire added. As consumers demand more traceability from the food they eat, a greater market is opening up for products that have been cultivated closer to home.

Dallaire said they don’t have to look far for horticulturally inspired motivation, as the neighbouring region in Québec is bustling with agricultural operations. Université de Hearst believes they can mimic that activity here at home.

“We’re close to the same (elevation),” she said. “They are very active and it’s a very lucrative market, so we think that we can do the same here right across the border.”

In addition to the greenhouse funding, the university received $190,000 to renovate space at its Hearst and Kapuskasing campuses for new office and shared spaces, where students and community members can go to access resources and incubate their entrepreneurial projects.

Similar to Ryerson University’s DMZ, a business incubator for emerging tech startups, the spaces would function as “living labs,” where users could access resources while developing their ideas and preparing them for commercialization.

The initiative is an extension of the programming offered through Hearst’s Centre Inovo/Inovo Centre, which focuses on green business and technologies. And while agriculturally themed projects are welcome, the labs are open to anyone looking to develop a service or product.

“It would be a place where we would build interdisciplinary teams around themes or projects and we would help them realize their projects,” Dallaire said.

All the funding is in place for the incubation spaces and renovations will start shortly, said Dallaire, who noted the university has up to 18 months to roll out its plan.

Timmins college to lead specialized training program
Sep 29, 2020 9:29 AM
Comments
We welcome your feedback and encourage you to share your thoughts. We ask that you be respectful of others and their points of view, refrain from personal attacks and stay on topic. To learn about our commenting policies and how we moderate, please read our Community Guidelines.