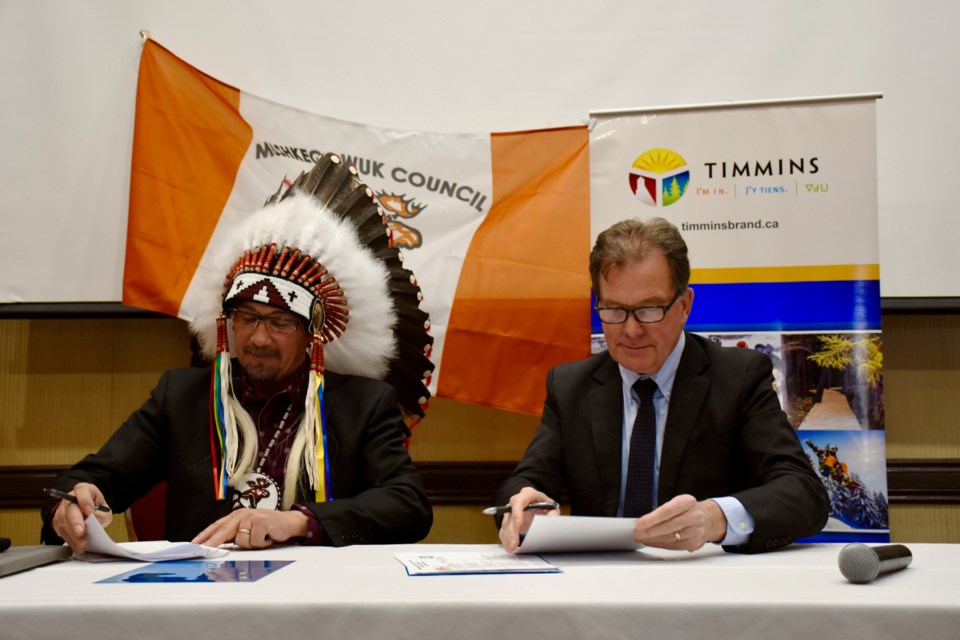 For Mushkegowuk Council Grand Chief Jonathan Solomon, inking a renewed memorandum of understanding (MOU) with the City of Timmins is akin to a marriage.

“Now we’ve got to work on that relationship and build upon it,” Solomon said after signing the document with Timmins Mayor George Pirie.

The MOU – Working Together to Build a Healthy and Sustainable Future – builds on a 2011 agreement between the city and Mushkegowuk Council to work on economic development matters of joint interest in the region.

The updated document includes goals and commitments to work on tough issues including racism, illicit drugs, homelessness and inadequate housing, as well as to jointly lobby upper levels of government, and more.

Solomon explained there are a number of reasons people from the seven Mushkegowuk communities come to Timmins, including health, education, employment, or lack of housing back home. He noted they are also contributing to the local economy.

He said the agreement will help build on services, and is an opportunity to address homelessness, and even develop social housing for members living there.

It's also a step towards reconciliation.

“The City of Timmins, in my opinion, should be the centre of reconciliation for Canada. We can define it here and we can get here,” said Pirie.

He noted nothing is going to happen in Canada without the full partnership of Indigenous people.

“That’s why this is so important. Timmins’ future depends on this relationship, these types of relationships,” said Pirie.

The seven principles in the MOU are:

• that both parties recognize the growing population of Mushkegowuk citizens in Timmins wanting social, economic and cultural growth while promoting a healthy environment addressing racism;

• to recognize the city is in Treaty 9 territory and to respect the spirit and intent of the treaty, including oral agreements between the Crown and First Nations;

• to recognize social and economic prosperity needs to be built with a regional focus to benefit all communities;

• to recognize the increasing number of Mushkegowuk-supported organizations and businesses in the city and desire to find ways to strengthen them; and

• that both parties see the desire of Mushkegowuk First Nations for self-determination and to build stronger governance systems.

Now that the MOU has been signed, Solomon said the next step is to create a committee and start working on it.

With commitment from all parties, he said, “we can move the yardstick forward.”

Innovation centres seeking producers to ramp up during pandemic
Apr 1, 2020 5:06 PM
Comments
We welcome your feedback and encourage you to share your thoughts on this story. We ask that you be respectful of others and their points of view, refrain from personal attacks and stay on topic. To learn about our commenting policies and how we moderate, please read our Community Guidelines.