After meeting at agricultural school, Harold and Patsy Schmidt married, found work outside the food industry, and started a family, all the while holding out for their long-time dream: a farm of their own.
Aug 19, 2016 2:30 PM By: Lindsay Kelly 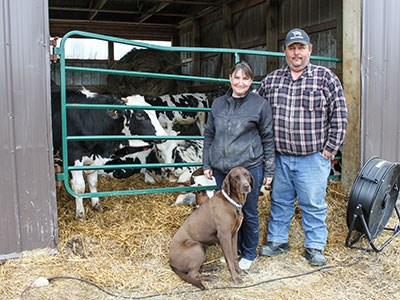 Timmins farmers Harold and Patsy Schmidt joined the artisanal chicken program this year, which will allow them to raise up to 3,000 chickens, a new product they can add to their beef operation.

After meeting at agricultural school, Harold and Patsy Schmidt married, found work outside the food industry, and started a family, all the while holding out for their long-time dream: a farm of their own.

Today, the couple is living out their aspirations on 65 acres in Timmins — called Acres of Dreams — where they produce beef, sell fresh farm eggs, and, new this year, produce chickens as part of a new artisanal chicken program.

Introduced by the Chicken Farmers of Ontario (CFO) in 2015, the program allows farmers to produce between 600 and 3,000 chickens a year. It’s aimed at small-scale producers who are targetting specific, niche markets, like farmers markets or local retailers.

Following a whirlwind application process, the Schmidts were approved as one of nearly 100 farmers across the province to apply to the new program. But that was the easy part.

They quickly discovered the challenges associated with raising chickens in the North, not the least of which is climate. After delivery of their new brood last spring, the Schmidts had to visit the barn every few hours to check on the chicks.

“When they’re those cute little yellow fluffballs, they can’t regulate their own body temperature,” Patsy explained.

“It has to be between 30 and 32 degrees (Celsius) in there all the time until they get their white feathers, and then you can slowly decrease their temperature by two degrees a week.”

It was a hard lesson to learn, and the Schmidts lost a few chicks during those first precarious weeks of April when the temperature dipped without warning.

Then they learned about feed. The chickens, which Pasty endearingly calls “couch potatoes” for their sluggish, lethargic manner, gorged themselves with free-choice feed, and the Schmidts had to change to a feeding schedule so they could reach their optimal weight of between six and seven pounds.

In early June, as the first batch of chickens was being readied for the abattoir, the Schmidts faced a new challenge: once their chickens were slaughtered, where would they put them all? Harold estimated they would need eight freezers to hold 600 chickens — not a cheap prospect at $28,000 a freezer.

And then there’s the issue of marketing, which is left entirely to the farmers. Luckily, a background in public relations means Patsy’s a whiz at communication and social media. But, because purchasing product from the Schmidts requires customers to put down a $10 deposit per chicken for a product they can’t see in front of them, chickens can be a hard sell.

So the Schmidts have been relying on the freshness and quality of their product as their main selling points. A new mobile trailer will allow them to travel to more destinations to get out and market their products.

But the Timmins community in particular has been so supportive of the Schmidts that “without their support, we wouldn’t be here today,” Harold said.

“People really like the fact that they can communicate with the farmer straight on and ask the questions as to what they were fed, how they were raised,” he added.

“We’re hoping that once they come for the first chicken, they’ll be back for the second, third, fourth, and fifth batch.”

Supplementing the Schmidts’ chicken operation is the beef operation, which produces a veal-like product.

The Schmidts purchase dairy farmers’ bull calves at a week old and raise them to seven months when they’re around 700 pounds, at which time they go to slaughter at the abattoir in Ramore 140 kilometres away.

“Because they’re so young, it makes the meat super lean, super tender,” Patsy said. “It melts in your mouth.”

Last year, the Schmidts decided to take a gamble and quit their supplementary jobs to focus on agriculture full time. It’s a daunting prospect since farming can be a tough go.

But they envision growing the operation, eventually bringing on additional employees once there’s enough work for them. But it has to be done right.

“Our goal is to get more customers and grow our business while maintaining quality,” Harold said. “We don’t want to be known as the big farm that is just pushing out animals and we’re not giving the quality to go with it, too.”

Despite the hard work, the Schmidts say it’s all worth it to follow through with a dream they’ve had since childhood. Harold and Patsy both grew up on farms, and once it’s in your blood, Patsy says, it’s hard to do anything else.

West Timmins gold digger pockets $8 million for exploration
Oct 15, 2020 2:56 PM
Comments
We welcome your feedback and encourage you to share your thoughts. We ask that you be respectful of others and their points of view, refrain from personal attacks and stay on topic. To learn about our commenting policies and how we moderate, please read our Community Guidelines.