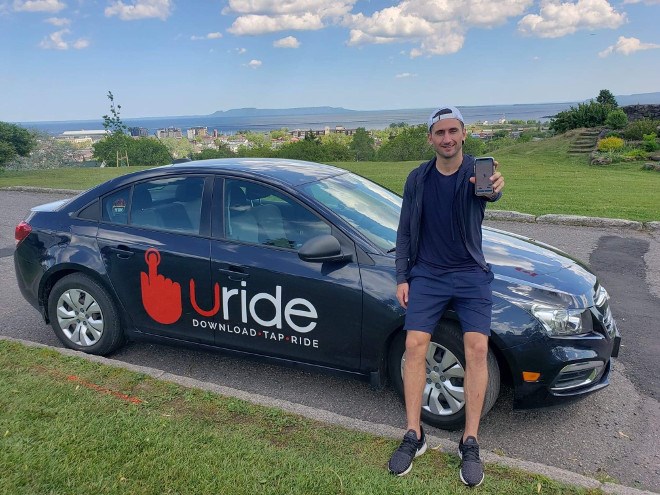 A Northern Ontario-conceived ridesharing service is expanding to Timmins and expects to hold a soft launch by the end of 2019.

Uride, which was launched in Thunder Bay in 2017, is currently recruiting drivers to get the service operational in Timmins.

“In most of the smaller communities we operate in – Thunder Bay, Sudbury, North Bay, and Sault Ste. Marie – we used to see crowds of people stranded outside of bars on a Friday or Saturday night, with a one- to two-hour wait for a cab,” Ruberto said in a news release.

“With the Uride app, our passengers now have an average pickup time of under 10 minutes and save quite a bit of money as well. Our mission is to prevent impaired driving in Timmins!”

The service can also be used as an alternative for business travellers arriving and departing at the airport, or getting around town for meetings.

To access the service, which is available 24 hours a day, seven days a week, users download the app on their smartphones and register with Uride. They can then order a ride by choosing the location they want to go, and that request gets sent to the nearest available driver.

After a driver accepts the ride, users can bring up a map on their phones to watch the car’s progress as it makes its way to their location. They then hop in the car and it takes them where they want to go.

The app connects to a user’s credit card, and the entire transaction can be done through the app, alleviating the need for users to carry cash.

Ruberto has said that the average time for pickup in all markets is 10 minutes.

Beyond Northern Ontario, Uride is available in Chatham-Kent and Winnipeg, Man., and is exploring expansion to other markets across Canada.