Surveying her burgeoning acreage, where newly planted bean shoots are poking their heads out of freshly turned furrows, Brianna Humphrey chuckles about her luck. “I have the worst soil known to man,” she laughs.
Jul 2, 2015 5:37 PM By: Lindsay Kelly 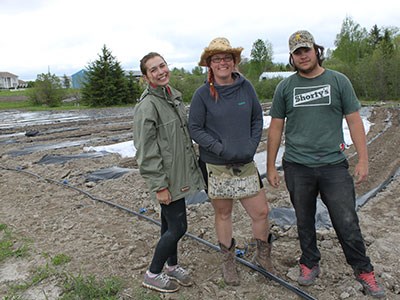 Brianna Humphrey (centre) operates her vegetable farm, Radical Gardens, over one acre in Timmins. Employees like Erin Brûlé (left) and Kevin Emery (right) have helped her grow the all-natural, organic operation in its second year of operation.

Surveying her burgeoning acreage, where newly planted bean shoots are poking their heads out of freshly turned furrows, Brianna Humphrey chuckles about her luck.

“I have the worst soil known to man,” she laughs. “I should really be selling bricks of clay and not food.”

When she decided last year to cultivate a 100-square-foot food plot on her parents’ property in the south part of Timmins, the poor quality of soil became her first challenge. But she planted crops anyway.

Some failed, but some flourished. She sold everything she had, and customers were clamouring for more.

Radical Gardens has since become Humphrey’s passion project. Tomatoes, basil, peppers, lettuce, carrots, and beans are among the offerings here. Humphrey’s learned to plant potatoes as a compost crop, which, when left unharvested, will decompose in the ground, enriching the soil.

Unique to her operation is an online farmers market. Customers can order locally grown items and imports from around the province through her website, which Humphrey delivers to their doors. Timmins had never had anything like it.

“All the farmers thought I was nuts,” says Humphrey, now in her second year of operation.

Easily Timmins’ youngest producer, Humphrey isn’t the picture of a traditional farmer. Adorned in tattoos, her bright-red dyed hair folded into a messy braid, Humphrey laughs a lot, irreverent and good-natured in her demeanour. Her fly-by-the-seat-of-your-pants approach to farming is pretty much on par with the rest of her life.

Trained as a pastry chef, Humphrey’s career came to an abrupt halt when she became severely ill with C. difficile, which was exacerbated by a serious unchecked case of celiac disease, an autoimmune disorder characterized by an intolerance to gluten. She had to find a new livelihood.

Coming from a family of gardeners, she had worked with the soil her entire life, but farming was something new. She decided to start small.

“I got 535 tomato plants, and it was the worst harvest I’ve ever seen in my life,” she laughs. “I had no idea what I was doing, but the demand was already there.”

Undaunted, she planted more crops and kept going, recruiting friends to help her till soil, culture seeds, and cultivate sprouts. This year, she’s expanded the development to a full acre.

Radical Gardens operates by the tenet of using everything it creates: Humphrey is planning an apiary so the bees can pollinate her crops, and the honey will be harvested and sold; flowers are grown as companion plants to help add nitrogen to the soil, with the farm eventually selling cut flowers and using the leaves to make lotions. This year, mustards and hot sauces are being added to her array of products.

And once her potatoes have enriched the soil, she’ll start harvesting them to distill vodka.

“Apparently that’s what we do,” Humphrey laughs. “Is there a niche to be filled? OK, let’s do it.”

Her out-of-the-box ideas may seem far-reaching, but she contends diversification is the only way to make farming viable in the North.

“Farming in 2015 is not like farming 30 years ago,” she says. “If you’re just farming, unless you’re farming meat, you’re going to starve to death. You’re not going to be able to pay your bills.”

And while eccentric in her approach, Humphrey’s serious about food and its cultivation in the North.

Detached from their food’s origins, people need to realize it’s unsustainable to try to eat as those in southern Ontario do, she says. Our growing seasons vary, our conditions are different, and the quality of food we get from the south deteriorates the further north it travels.

If people are spending money on food, why not spend it locally, where that investment filters to a local producer, supports her business, and creates work for locals?

“I’m a huge believer in food sovereignty in Northern Ontario,” Humphrey says. “We’re a huge province and we’re relying solely on southern Ontario to feed us? That’s a horrible model.”

She’s now in the early stages of becoming a local-food brokerage, which would distribute product from local producers.

A few restaurants are already using her as distributor.

The stable of a half-dozen friends she recruited early on have become her loyal staff, who work alongside her to bring their vision to fruition.

Each owns a segment of the company, strengthening their stake in how it performs.

Radical Gardens is poised for growth in the next few years. Humphrey is seeking funding for a greenhouse that will allow them to grow year-round, and she’s looking at acquiring more land for expansion. Her payroll is sustaining itself, and she’s hoping to make her first profit this year.

“I’ve been in the thick of it for four years now, and to see it blossom and change and grow is just awesome.”

Nickel explorer seeks to bring new life to two former Timmins mines
Nov 3, 2020 2:00 PM
Comments
We welcome your feedback and encourage you to share your thoughts. We ask that you be respectful of others and their points of view, refrain from personal attacks and stay on topic. To learn about our commenting policies and how we moderate, please read our Community Guidelines.