Within the first quarter of 2016, Great Lakes Graphite expects to have its new graphite micronization mill up and running in Matheson.
Jan 20, 2016 7:57 PM By: Lindsay Kelly 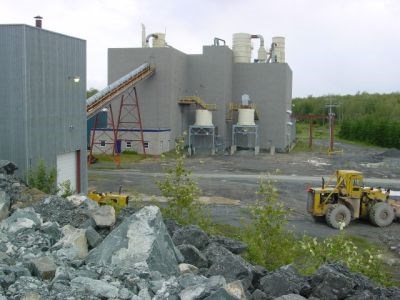 A former vermiculite-processing mill in Matheson is getting a new life as a graphite-processing facility with Great Lakes Graphite.

Within the first quarter of 2016, Great Lakes Graphite expects to have its new graphite micronization mill up and running in Matheson.

Over the last year, the company has been working to transform a former vermiculite-processing mill owned by Northfil Resources into a graphite-processing facility, which will grind the graphite into a fine powder.

Paul Ferguson, the company’s chief marketing officer, called the Matheson mill an “incredible windfall,” because it had just about everything the company needed to get its operation up and running.

“To find a facility that was equipped with the exact equipment that we would have needed to order, in order to do this from scratch, was amazing,” Ferguson said.

“It needed refurbishment, because it’s been sitting there for 14 years, but it would have cost us $25 million or maybe $30 million to replicate that from scratch, and probably two to three years of permitting.”

Instead, Ferguson said the company is coming very close to staying within its $800,000 retrofit budget and only slightly behind its original schedule, which would have had the operation up and running by October or November.

After securing a use agreement with the facility owners, the company sent away the equipment for refurbishing; it arrived back on site in late December. With just a few days to go before Christmas, one of three circuits had been installed and hooked up, ready to turn on.

“We just didn’t think it was realistic to have a plan that was starting at capacity,” he said. “We’ll work our way up to that probably over the course of the next 12 to 18 months.”

On Jan. 20, the company received approval from the Ministry of the Environment to amend its air and noise permit.

It was the final provincial permit needed for the company to go forward with operation of the plant.

“The facility has the existing noise-air permit, but in order to process graphite, we had to apply for an amendment, because the facility didn’t anticipate that when it was designed and built,” Ferguson said. “That’s been about an eight-month process, but now we’re basically at the end of it.”

One of the company’s final obligations is the completion of consultations with First Nation and Métis interest groups. So far, Ferguson said, the company hasn’t had any objections, but it’s been difficult getting in touch with some of the parties, so the company was resorting to certified mailing to inform impacted communities of the pending graphite operation.

Once it gets up and running, fed by stock from Brazilian supplier DNI Metals, the micronization facility will target end users manufacturing products in the lubricants industry, such as for brake pads.

“These are fairly traditional graphite markets; they’ve been around for a long time and it’s sort of the low-hanging fruit,” he said. “These are applications that are relatively less stringent and you can qualify for in a relatively short period of time — weeks or a couple months.”

With higher quality product, end users are more stringent about making sure the supply is of the best quality, Ferguson added, and so it takes longer for suppliers to qualify.

For high-end products, like batteries, manufacturers use purified and spherical graphite, the latter of which is shaped and coated and used for things like lithium-ion batteries.

“It gives it the properties that make it perform better in those applications where the reliability is extremely important,” Ferguson said.

“When you get to those products, it’s really almost like an engineered product,” he added. “It’s not anything resembling a mine concentrator ore.”

Ferguson said roughly 70 per cent of the graphite used in North America currently comes from China, and the quality of the graphite is very uneven, which provides a good opportunity for Great Lakes Graphite to secure a place in the market.

He said the quality of their graphite ranges anywhere from an average of 95 to 97 per cent, and some is more than 99 per cent pure.

Eventually, the company plans to move into high-end graphite, but for now the micronized graphite offers an entry into the market.

The Matheson operation won’t create many jobs in the early years; Ferguson said the entire operation can be run with three to four people. But that could increase depending on how sales go. Some additional work has been created for local electrical and contracting firms during the construction process.

There are benefits in other areas, however. Great Lakes Graphite is collaborating with Canadore College’s ICAMP innovation centre in North Bay and Northern College in Timmins on bringing students in to help address industry problems and offer work placement opportunities for students.

One of the first problems they’ll address is creating a bag system for the graphite.

“We want to be part of the community,” he said, “and if there are opportunities where we can make this a resource that’s useful to the colleges up there, then, hey, that’s awesome.”