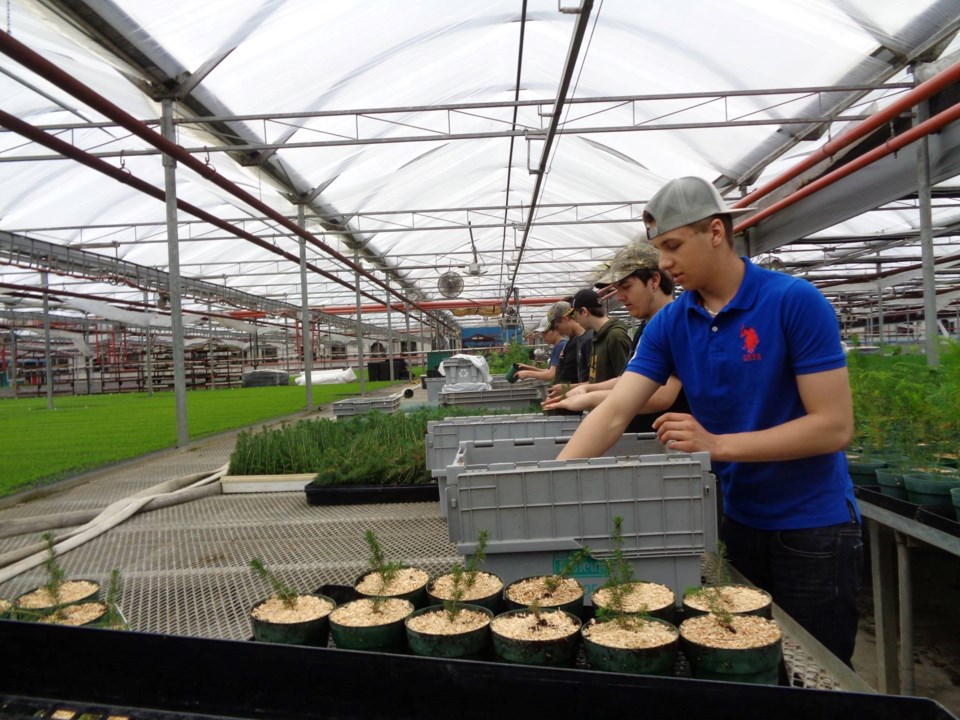 This could have been a disastrous year for Millson Forestry Service, with the COVID-19 pandemic forcing the shutdown of many industries and businesses.

It was a big boost for the Timmins-based company when on April 2, the provincial government declared the forest industry an essential service throughout the pandemic

“At the time of the pandemic, we already had a greenhouse full of trees. So we couldn't just let them die,” said Jenny Millson, owner of Millson Forestry Service.

“For a little while, we kind of just maintained what we had until we had a better idea of just how strict everything was going to become, as far as what was shutting down or not.”

Despite the turbulent times amid the pandemic, Millson Forestry is gearing up for a busy summer and growing plenty of saplings for planting locally and beyond.

Physical distancing is being practised on site as much as possible, with dividers used in some instances for those working in close proximity at their facility on Dalton Road in the city's west end.

Not that the past few months haven't been challenging for Millson Forestry, which has been in operation since 1980.

“We've been affected, for sure,” said Millson. “There are people who are afraid to work, so that’s a factor. And even getting some supplies, there were gaps in availability of stuff, just as everybody was having to adjust.”

Operations are now moving ahead almost at a full-steam level, and for forestry companies like Millson, which operate year round, the pandemic could have had an impact beyond 2020.

“We supply trees to forest companies, and the tree plants are going ahead so we've started shipping those out. We're still growing. Anything we're growing right now, a lot of it is for next year. So you don't want to lose a year's worth of planting.”

Millson said they are still receiving inquiries about summer tree-planting jobs, which were very popular for students, but they haven't been involved in that sector for years.

“Everything is contract-based and when we lost the contract, it was gone for seven years.”

Millson supplies trees not just for the northeast, but to communities as far south as Barrie and Algonquin Park, and west to Thunder Bay.

“The trees get shipped far. But we're not a retail outlet, so it’s easy to kind of isolate everybody on site when we’re working. We're not having to worry too much about outside contamination coming in,” said Millson.

The season started long ago in the greenhouse, and this year Millson Forestry is growing everything from pine, fir and spruce to hemlock and cedar.

“It’s all contract growing, though. We do everything under contract, so what we have at any given time depends on what the contracts are.”

She said that although the forest industry is mainly spruce and pines, they do grow quite a bit for private enterprises such as landscapers and Christmas tree farms in southern Ontario.

Much of the work is seasonal, and in peak times Millson employs approximately 50 people.

Aside from the greenhouse, there are several firewood contracts to fill, including for several provincial parks.

With the nature of their operations, such as not having to be in regular contact the public, and their commitment to health and safety, the company has fared quite well during the pandemic.

“We're going over all the symptoms with everybody regularly, so if they do feel sick, we make sure they stay home. And if they have a fever or have any of the COVID symptoms, to make sure they're calling the health unit. We really haven't had anybody that has presented any symptoms,” said Millson.

Andrew Autio covers civic matters under the Local Journalism Initiative out of the Timmins Daily Press, which is funded by the Government of Canada.

Construction of Gogama gold mine could start by year's end
Jun 30, 2020 2:12 PM
Comments
We welcome your feedback and encourage you to share your thoughts. We ask that you be respectful of others and their points of view, refrain from personal attacks and stay on topic. To learn about our commenting policies and how we moderate, please read our Community Guidelines.