A new mining project coming to Timmins has the capacity to create 1,000 local jobs and economically diversify the City With a Heart of Gold. General Magnesium Corp.
0
Feb 1, 2016 2:19 PM By: Lindsay Kelly 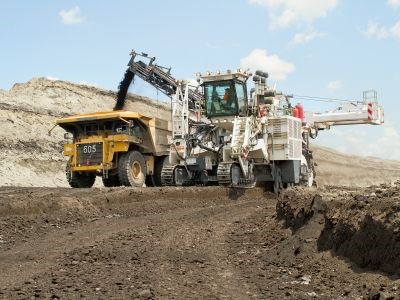 Magnesium-talc ore at General Magnesium Corp.’s Timmins mine will be extracted with a Wirtgen surface miner, like this one.

A new mining project coming to Timmins has the capacity to create 1,000 local jobs and economically diversify the City With a Heart of Gold.

General Magnesium Corp. is set to start production this spring on a magnesium-talc mine that has an NI 43-101 resource estimate of close to 100 million tonnes, including 54,076,357 tonnes in the measured and indicated category, and 43,000,000 tonnes in the inferred category.

Last fall, following 16 months of due diligence, the company secured a multi-year, $4.9-billion deal with Hunter Douglas Metals, whose parent company manufactures aluminum blinds. Magnesium is a key component used as an alloy in manufacturing aluminum.

General Magnesium’s president and CEO, William Quesnel, said the deal is huge and marks an excellent foundation for the longevity of the company.

“We’ve sold all our product — 100 per cent of our magnesium — for a 15-year renewable contract,” he said. “So if you do the math on it, it’s worth billions of dollars.”

Lighter than aluminum by a third, and two-thirds lighter than steel, magnesium is also valued in the auto industry for use in making vehicles lightweight. Quesnel said his company has been approached by die cast manufacturers who’ve expressed an interest in setting up shop alongside the mine, hinting at potential future investment in the city.

The company is currently working on securing an offtake agreement for its talc.

“Once we do that, then we have all our products sold, so it’s kind of really neat,” Quesnel added.

Though the magnesium-talc operation may seem to have come out of nowhere, the company has been working on the project since 2000, when it acquired the property, located in Porcupine just east of Timmins, from Teck Cominco.

Quesnel, a 30-year industry veteran, grew up in Timmins, but left to attain his geology degree at the University of Waterloo.

Since then, he’s worked in Thunder Bay for a consulting firm, at Kidd Creek in Timmins, with LAC Minerals (now Barrick Gold), and in various capacities in Nicaragua, Argentina, Venezuela and Chile.

“I thought once I left Timmins I would be gone,” said Quesnel, who currently resides in Perth, south of Ottawa. “But coming back, I love the North and I really believe in the North.”

Because the ore is so soft, there’s no need for drilling, blasting or crushing on site, which offers a huge cost-saving measure, Quesnel said. Instead, the company employs a Wirtgen surface miner — made in Germany and one of only 500 worldwide — to cut into the ore. It will then be sent to a local facility for toll milling.

In test trials leading up to development, the surface miner extracted up to 1,000 tonnes of ore per hour, and the company stockpiled 50,000 tonnes at the mine site, which will be processed starting in June.

As the company starts to generate cash flow, it plans to build three plants: one for talc, one for magnesite, and a magnesium thermal reduction plant, which will reduce the magnesite to a metal (magnesium).

Quesnel said the company is looking to build near Kidd Creek, which already has access to power, water, gas, and rail access. It plans to use rail access both to transport the magnesite concentrate to the thermal reduction plant, and to haul out the resulting magnesium ingots.

Environmental baseline work for the operation has been completed and a mine closure plan has been filed.

Quesnel estimates the three plants will require 1,000 workers, and the company has already started hiring, taking advantage of the pool of highly skilled workers that have recently been laid off from other local operations.

The company is now working with investment firm Haywood Securities to take General Magnesium public, which will help raise money for the first phase of construction — the talc plant.

“They’ve come up to the site, and they’re really excited about the project,” Quesnel said. “They really think this is a neat thing for Northern Ontario, which we do too.”

Production will start at 500,000 tonnes per year, and ramp up to 1.2 million tonnes annually, resulting in a 100-year mine life. A recently completed drilling program revealed more ore below the current deposit.

Quesnel is excited about the predicted longevity of the mine and the accompanying long-term job security for generations of Timmins miners.

Though the city gained its reputation as a gold-mining town, he believes Timmins could become a new centre of excellence for light metal research and development.