Five years ago, when Sylvia Stockill started cultivating fruit and vegetable gardens for her own interest, her produce was so plentiful and tasty, friends encouraged her to turn it into a business.
Jul 21, 2016 2:47 PM By: Lindsay Kelly 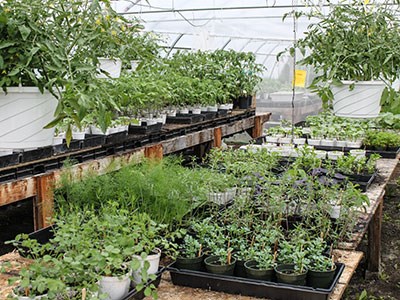 At Bulstock Acres, Sylvia Stockill can’t keep her vegetable and fruit plants on the shelves as demand grows by consumers looking to grow their own food.

Five years ago, when Sylvia Stockill started cultivating fruit and vegetable gardens for her own interest, her produce was so plentiful and tasty, friends encouraged her to turn it into a business. Now, her thriving garden centre has become an integral part of Timmins’ local food movement, teaching people to grow their own food, appreciate new tastes, and support local producers.

At Bulstock Acres in Connaught, just outside of Timmins, Stockill starts plants from seed, nurturing them through the early cold spring until she opens her doors in May. The variety of plants she sells combined with her extensive gardening knowledge have made her a local favourite amongst gardeners new and experienced.

While older generations remember helping their parents or grandparents in the garden, many of the younger generations never had that opportunity and are unschooled in how to grow their own food.

"A lot of younger people have mentioned that they like coming here because they can ask me exactly how would I cut that, how deep do I plant it, how far apart do I put them," Stockill said.

She credits the rise in interest in growing to the local food movement, which has taken the Timmins area by storm. More and more people are interested in food security, wanting to know where their food comes from, eating non-genetically modified (GMO) varieties, and supporting local producers.

An initiative by the city to install community gardens has also resulted in more people trying their hand at growing, resulting in an expansion of their palettes to embrace new varieties and flavours. Each year, among the tomato and eggplant, rhubarb and cucumber plants, Stockill chooses a new variety or two to test out.

Last year, the ground cherry, a sweet berry that forms inside husks and falls from the plant when ripe, was so popular, people stopped her while grocery shopping to ensure she was bringing them back for an encore.

Another popular variety, the cucamelon, grows like a cucumber, but looks like a miniature watermelon. It tastes like a cucumber with a citrus aftertaste and is “very addictive once you start popping them, just like cherry tomatoes,” Stockill said.

Finding varieties that suit local climate and taste has involved a lot of trial and error over the years, and not everything is a success. But when it is — like the lemon apple cucumber — she can’t keep it in stock.

“It started one year when my son saw it in a catalogue,” Stockill said. “Now I order half a pound of seed just to keep up. There are people here opening day just to make sure they get their lemon apple cucumbers.”

All her plants are varieties that are suitable to grow in Timmins’ sometimes harsh climate, and she only plants varieties that she grows in her own gardens. All her seeds are guaranteed to be GMO-free — a trend fuelled by customer demand — and although her farm isn’t certified organic, she doesn’t spray her crops with herbicides or pesticides.

“The only reason you would wash my beans would be to get off physical dirt that maybe the rain has splashed on them from the ground,” she said. “Other than that, you just pop them in your mouth and eat them.”

In the fall, she harvests vegetables from her two acres of gardens to sell on site and sells any leftover produce to other local producers. Two collaborators are Trussler’s Pantry, which creates food boxes for local subscribers, and Radical Gardens, a farm that recently opened a restaurant and uses Stockill’s ingredients in daily meals.

Stockill eschews the idea that you need a plot of land or lots of experience to grow your own food, noting that peppers, tomatoes, cucumbers, and even pumpkins will do just fine as potted crops.

“Anything, you can grow in a large pot,” she said. “So you could live on the fifth floor of an apartment building with a balcony and have a couple of pots out on your balcony with some cucumbers and tomatoes in them.”

West Timmins gold digger pockets $8 million for exploration
Oct 15, 2020 2:56 PM
Comments
We welcome your feedback and encourage you to share your thoughts. We ask that you be respectful of others and their points of view, refrain from personal attacks and stay on topic. To learn about our commenting policies and how we moderate, please read our Community Guidelines.