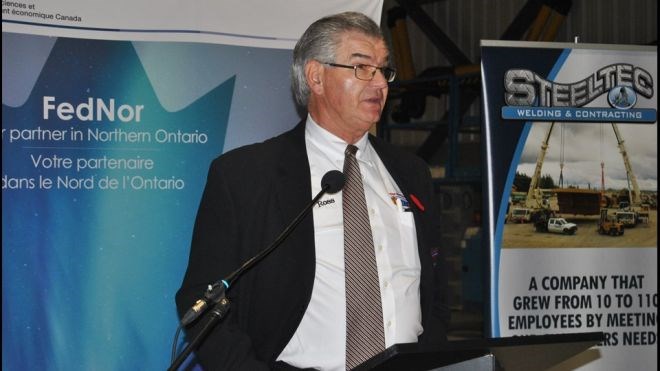 Ross Woodward, who founded The Bucket Shop in Timmins, speaks at FedNor announcement where his company received $1 million. Photo by Frank Giorno

The Federal Government has announced $5,146,870 for four enterprises in Timmins.

Of the funding, the City of Timmins is receiving $2,497,150 toward the expansion of municipal services at its new industrial rail park.

The development of the industrial park in the east end of Timmins has helped land the construction of Calabrian Corporation’s $20 million Sulphur dioxide plant creating 20 new, high-quality jobs.

The new industrial park has attracted interest as well from a Chinese basalt mining company.

The Bucket Shop is receiving $1 million toward the construction of its new 65,000-square-foot manufacturing and refurbishment facility. The investment is provided under the FedNor Targeted Manufacturing initiative for Northern Ontario (TMINO).

A portion, totalling $949,720 over a three-year period, will be used to enhance telecommunications development and provide information and communications technology training, education and awareness for residents and businesses across Northeastern Ontario.

Another $500,000 will go to its Broadband and E-Business and Marketing program (BEAM). This funding will be earmarked for helping small and medium-sized enterprises develop digital skills and incorporate innovative technologies for their businesses.