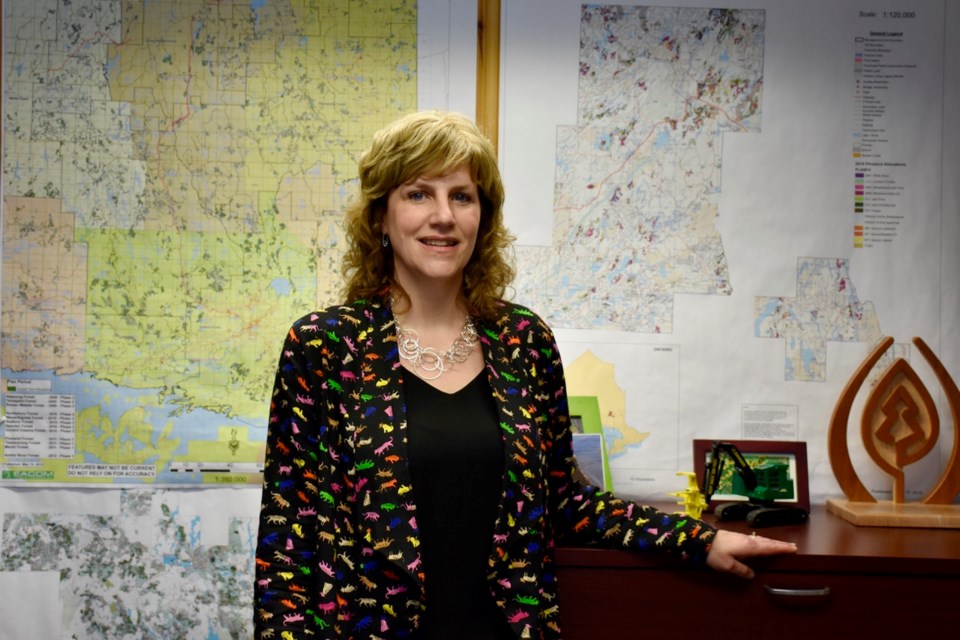 EACOM hired Jennifer Tallman as its chief forester for Ontario last fall. She is the first woman to hold the position for the company. (Maija Hoggett/TimminsToday)

Jennifer Tallman didn’t set out to be a trailblazer for women in forestry.

“I never really thought about that I was setting the path, but it just kind of turns out that way,” said Tallman, who is the first woman to serve as EACOM’s chief forester for Ontario.

Working at the Timmins sawmill, she was appointed to the position in the fall.

"It’s a really interesting role and especially as we’re going forward. EACOM is a fairly small company, we’re starting to grow, so some of the opportunities that I have is making sure that we have a really good team,” she said.

There are five EACOM sawmills in Ontario that need wood supplied to them, in Timmins, Gogama, Elk Lake, Ear Falls, and Nairn Centre.

That wood is harvested from the Pineland and Spanish forests, which are on Crown land, and EACOM manages those forests and several co-operatives of which the company is a part.

As chief forester, Tallman helps make sure the forest management plan for the areas EACOM is responsible for are being carried out. That means planning harvests and access points, renewing the forests after harvest, liaising with First Nations partners and the general public, and more. There are also government committees to sit on, such as having an input of strategies for Species at Risk, and certification.

Tallman started working at EACOM in 2015 after the paper mill in Iroquois Falls shut down. In the fall, when the past chief forester retired, she was appointed to the role.

“Jenny had the skills needed, was well respected outside the company and worked well with the team," said Christine Leduc, EACOM's public affairs director. "When her predecessor announced his retirement, management knew she was a natural fit, so her appointment was a quick decision."

When Tallman graduated from Lakehead University in 1992, she estimates about a third of her class was comprised of women.

Going into the industry, they knew they’d be in the minority.

Slowly the demographics of people working in forestry are changing.

Tallman worked for more than 20 years at the paper mill in Iroquois Falls and says she was one of the only female foresters for the company for quite a few years.

“There’s definitely a lot more women that are in the field; it’s pretty neat,” she said.

Tallman’s love for natural resources began at a young age.

Growing up, she remembers always being outside and camping.

“The Ministry of Natural Resources, at one time, ran the Junior Ranger program, so the summer that you were 17 you could be in the program and you were sent to a Junior Ranger camp and worked different aspects of what the ministry had,” she said.

Tallman was assigned to the Wawa district and worked at Lake Superior Provincial Park.

“That was an awesome summer and that really piqued my interest. We got the opportunity to do work in parks, to do work in the timber side, on the forestry side, and on the fish and wildlife side,” she said. “I think that’s what cemented my interest.”

After graduating with her Bachelor of Science degree in forestry, she moved to Cochrane to work with the Ministry of Natural Resources in the Foresters in Training (FIT) program.

Within a couple of years, Tallman moved on to the Iroquois Falls mill, where she spent more than two decades.

At EACOM, she was given the opportunity to get back into the planning side when she was hired as the co-ordinator in forest planning.

Going from working on site to planning made for an interesting shift.

It’s been a benefit in her new role, though.

When it comes to planning, Tallman said it’s “easy to say ‘Let’s do this,’ but to have that context of having worked out on the forest definitely helps with this job.”

While the boardrooms and work sites are growing more diverse today, it wasn’t always that way.

In university, she remembers attending a career fair and asking a man what kind of careers were available with his company. He suggested working in the camp kitchen.

“And we were like, ah no, we’re studying forestry,” she recalled. "You went from that in the late '80s and early '90s to where people don’t bat an eye – there are women working in all aspects of forestry.

"You have a lot more women who are working in the operations, on the planning side, and moving up into some those higher roles of being woodlands managers and chief foresters, and that just seems to be on the increase, which is good," Tallman added.

"The more mix of people you have, the different points of view and different ways of doing things, the better off we are.”