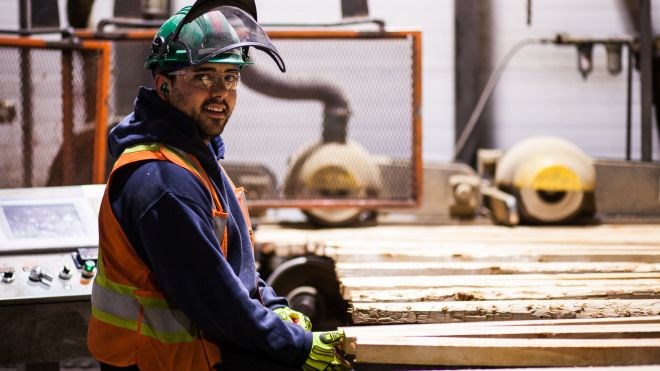 In September, EACOM installed a continuous dry kiln at its Timmins sawmill. It’s one of several investments across operations to help keep the company competitive in the face of the ongoing softwood lumber dispute. (Photo supplied)

A newly installed continuous dry kiln at EACOM’s Timmins sawmill is expected to increase output and improve energy efficiency, giving the company a competitive edge as it battles against countervailing  and anti-dumping duties imposed by the U.S.

Installed in September, the continuous dry kiln is the first of its kind in eastern Canada. It continually pushes lumber through the kiln, eliminating a bottleneck in the system, while keeping the energy output roughly the same.

“EACOM has been consistent in its strategy of growth and continuous improvement,” said EACOM’s president-CEO Kevin Edgson in a statement released at the time.

“This investment demonstrates our commitment to the Timmins sawmill.”

Christine Leduc, EACOM’s director of public affairs, said the kiln is just one of several improvements the company has made at its Timmins mill following the 2012 fire that destroyed half the operation.

After the initial $27-million investment to rebuild what was lost, increasing capacity by 20 per cent, the company invested in some tech upgrades in 2015 and 2016 before installing the kiln last year.

Improvements weren’t limited to the Timmins operation. In 2017, EACOM also installed a lumber grader at its Elk Lake mill and completed the acquisition of the engineered wood mill in Sault Ste. Marie, which was previously a joint venture between EACOM and Canfor.

“Because we have limited resources, we’re trying to make and identify the best capital projects to get the best return on investment, learn from experience, and really find what's the best fit for our sawmills,” Leduc said.

“You really have to take a look at the equipment you have in place, what is creating bottlenecks and if you release one bottleneck, will there be others that you hadn't thought of which may get in the way of you realizing the full return on investment.”

Leduc said continuously making improvements is one way the company can stay competitive in the midst of the contentious softwood lumber dispute with the U.S.

The U.S. and Canada have been unable to come to an agreement on the trade of softwood lumber after a former, nine-year agreement expired in 2015.

American producers allege that the Canadian industry is subsidized by the provincial and federal governments, while in the U.S., prices are set by the market – a situation the U.S. contends is unfair. It has long argued Canadian lumber should be subject to a tariff to offset the subsidy.

In December, the U.S. determined that Canadian producers will once again pay to export their lumber to the U.S. EACOM will pay 20.83 per cent duties on all shipments there.

“Paying those duties and giving up that cash is a hit financially and we would much rather take that money and invest in our sawmills,” Leduc said.

U.S. producers can only supply 70 per cent of the market for residential builds, and so companies like EACOM help fill the remaining 30 per cent. EACOM’s other big market is the Toronto area, which has Canada’s largest housing market.

It’s unlikely EACOM would find new markets in, say, B.C., which has its own sawmills, or China, which is too far to make it profitable, Leduc said. So the companies will take the hit, while still fighting against the taxes and duties.

“We’re really looking to supply the market, and although we are facing a tax, we will continue to send our products to the U.S.,” she said.

Yet, Leduc said the company is encouraged by the growing interest in building with wood, both as a structural component and an aesthetic one, and the 2014 amendment to the Ontario Building Code, which allows wood buildings of up to six storeys, helps the sector as a whole.

Despite industry fluctuations, EACOM has continued to add to its workforce, growing from 820 employees (across operations) in 2014 to 1,120 in 2017. Leduc notes those numbers reflect direct jobs only and don’t include indirect industry jobs, such as truck drivers, contractors, or any others servicing the mills.

Leduc said the company will continue in 2018 to look for additional areas to invest in and further streamline operations.

“We’re on a mission to be the top Canadian lumber producer,” Leduc said, “and so it’s important that we continue our focus on growth and that every year we keep getting better and better.”